Samsung Galaxy A50 Android 10 release may not be long now

While it’s yet to confirm precisely when this device will get the update, there’s an indication that the release may not be that far off now. This will come as a relief to the many Galaxy A50 owners that are waiting to jump on the latest version of Android.

The Galaxy A50 is on the list of Samsung devices that will get Android 10. So sooner or later, this device will be updated to the latest iteration of Google’s mobile OS coupled with One UI 2.0. We reported a month ago that Samsung had started Android 10 development for the Galaxy A50.

The Galaxy A50 has now received its Wi-Fi certification with Android 10 on board. This is a solid indication that the development work on this firmware update has progressed nicely. It’s only a matter of time now before Samsung starts rolling out the update.

Exactly when that happens remains a mystery for now. It can normally take a few weeks for an update to arrive once it starts picking up the required certifications. Samsung has picked up the pace with updates recently so there’s a good chance we may not have to wait too long. If you absolutely can’t wait, maybe consider the Galaxy A51 which comes with Android 10 out of the box.

Are you looking forward to the Galaxy A50 Android 10 release? What one of the many new One UI 2.0 features are you most interested in trying out? Let us know in the comments below. 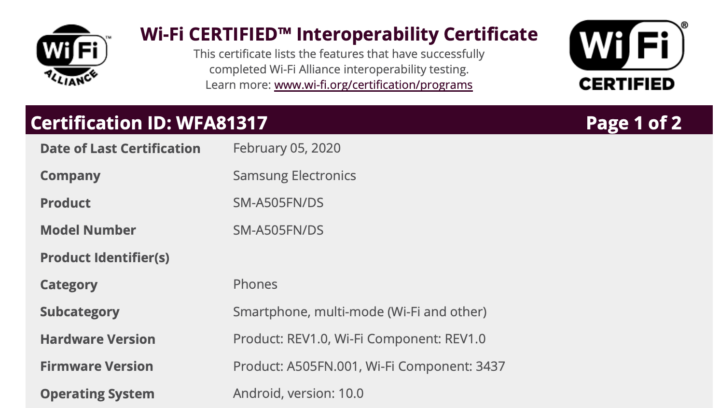