The Galaxy S10 has the fastest data transfer speeds in nearly every market, according to a recent report by Ookla based on data gathered by Speedtest Intelligence throughout Q3 2019.

Galaxy S10 is the fastest phone in all but five markets

According to the data shared by Ookla, the Samsung Galaxy S10 outperformed the Huawei Mate 20 Pro and iPhone Xs in terms of average data transfer speeds in every market except for France, Germany, Japan, the UK, and Nigeria, the latter of which seems to lack enough data to include anything but the iPhone Xs. 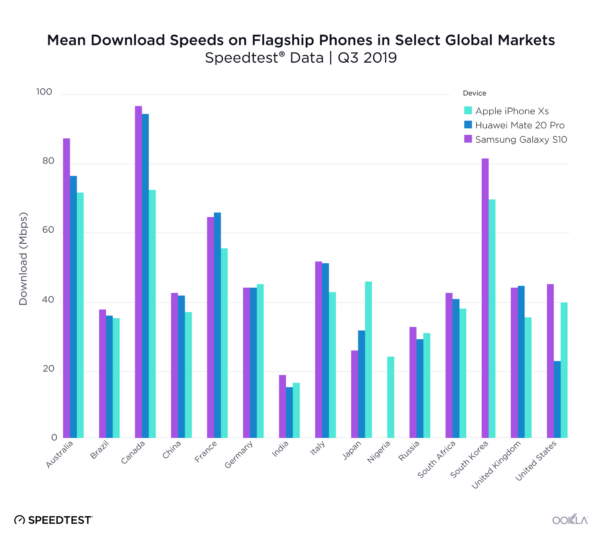 Samsung was also the fastest brand of phones in the United States, and it was only last month when Speedtest data showed that the Galaxy S8 and Note 9 have remained the most popular Android phones in the USA.

Samsung leads the 5G performance charts, Qualcomm has the most popular modems

The recent Speedtest data shows that the Samsung Galaxy S10 5G achieves faster 5G speeds compared to the Huawei Mate 20 Pro in every 5G market except for China.

In addition to that, Ookla also looked at the most popular modem brands and, unsurprisingly, Qualcomm rose atop the competition in 133 countries during the third quarter of the year. 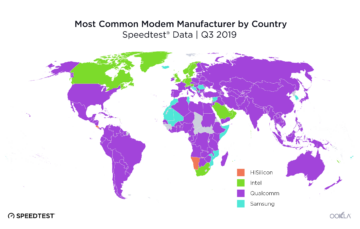 Qualcomm was followed by Intel whose modems were the most popular in 32 countries; Samsung, who won the popularity contest in 16 countries; and HiSilicon who was recognized as the most common modem brand in Costa Rica and Namibia.