Samsung is the second-largest mobile manufacturer in the USA, following Apple, so there’s no surprise that the three most popular Android smartphones in the states are made by the Korean tech giant. However, these popular models are not from the latest generation, which might come as a surprise to those of you who tend to follow a yearly upgrade schedule.

Galaxy Note 9 and Galaxy S8 dominate the US market

The Galaxy Note 9 and Galaxy S8 are, by far, the most popular Android smartphones in the USA, and that is partly because they had more time on the market compared to newer models like the Galaxy S10 series, and especially the Note 10. Although the newer Galaxy flagships have sold very well, many Galaxy S8 and Note 9 users haven’t felt the need to upgrade to a newer model yet.

This could change next year, at least for Galaxy S8 owners who might want a piece of One UI 2 and Android 10. The newer OS version will not be coming to the Galaxy S8 series, and the only way to experience it officially will be to upgrade to a newer device, whether it’s going to be the Galaxy S11 or a Galaxy A (2020) model. 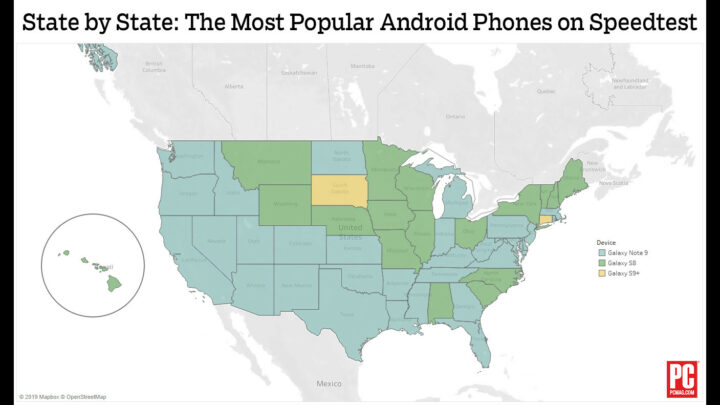 As it stands, the Galaxy Note 9 seems to be more popular among users residing in the Southwest USA and across the West Coast. The Galaxy S8 has more traction in the Northern USA and the South East, while the Galaxy S9+ is seemingly very popular in South Dakota and Connecticut.

Keep in mind that this data was gathered from users who have benchmarked their devices and mobile connections using the Speedtest mobile app. It might not tell the complete story of which Android smartphones are popular and where. However, given Samsung’s position in the US market, it would be outlandish to think that the most popular Android smartphones in the country are not made by Samsung.

Which Galaxy smartphone do you own? Do you relate to these findings, or are you rocking a different model that hasn’t been mentioned in this story? Join us in the comment section below.