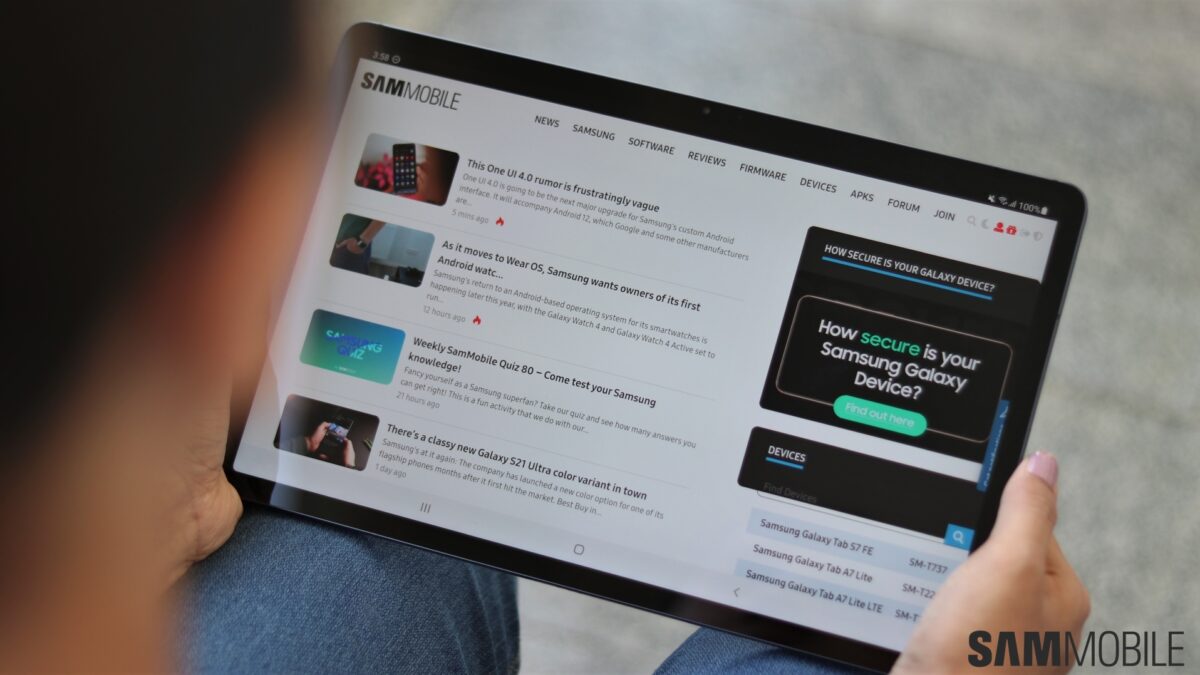 Android 13 is now live for the Galaxy Tab S7 FE in Europe, as per Samsung’s tentative roadmap for Germany. It’s a nice little gift for the end of the year from Samsung, and we’re happy to report that, on a first impression, One UI 5.0 only serves to improve the Tab S7 FE experience.

The update is fresh, and we didn’t have enough time to test every facet; plus, it usually takes a few days for a major system update to “settle.” With that in mind, this isn’t a definitive review of Android 13 for the Galaxy Tab S7 FE. But our first impression is positive, and no One UI 5.0 feature seems to have been left out for the Tab S7 FE update.

One UI 5.0 hasn’t done wonders for the Galaxy Tab S7 FE in terms of performance, but it hasn’t made things worse, which is often a risk with mid-range devices receiving brand-new updates. So that’s great!

General UI animations seem a little smoother after the One UI 5.0 update, and the system appears to be slightly more responsive in places. Everything feels a bit more stable and tightly kept together. It’s not a huge improvement, but every little bit helps, considering the Galaxy Tab S7 FE’s mid-range specifications.

If you’re a Samsung DeX user, we have more good news. Once again, the tablet feels snappier in DeX after the One UI 5.0 update. Furthermore, all the UI changes we mentioned in our Galaxy S22 One UI 5.0 DeX first impressions are there, including the new Finder taskbar icon, the new taskbar settings menu, the redesigned notifications area, and the addition of a calendar pop-up window.

With the One UI 5.0 update, the Galaxy Tab S7 FE hasn’t seen as many UI changes and additions as most other devices, but that’s only because some of them were already available through One UI 4.1.

In other words, while the revamped multi-window gestures were a new addition to the Galaxy S22 series with One UI 5.0, these features (and the taskbar) were already available for the Galaxy Tab S7 FE through the One UI 4.1.1 update, which wasn’t released widely for the S22 lineup.

Nevertheless, One UI 5.0 for the Galaxy Tab S7 FE still brings a few useful tweaks to the user experience, including the new “Connected devices” menu in the Settings app, new lock screen customization options, and a new method of managing background apps via the Recents screen.

Speaking of Recent Apps, the Galaxy Tab S7 FE did receive a tablet-specific UI improvement through One UI 5.0. Namely, if you have multiple apps in the Recent screen and start closing them one by one (starting with the right-most app), the list now scrolls only vertically, as shown in the video below.

Apps no longer jump up and down on the Recents screens as you close them, and not only does this seem to improve UI performance, but it also makes multitasking a little easier. It’s a minor improvement; nevertheless, it makes the Recent apps screen more legible and more comfortable to work with.

No compatibility issues with my older mobile games (within limited testing)

Since the Galaxy Tab S7 FE is also a good multimedia device and a decent gaming tablet (assuming you manage expectations), it might be worth noting that none of my older mobile games have had compatibility issues after the Android 13 update.

Three aging games that I have on the Galaxy Tab S7 FE, namely XCOM: Enemy Unknown, Medieval II: Total War, and Company of Heroes, were already prompting me that they were built for an earlier version of Android when I was using versions 11 and 12 on the Tab S7 FE. I was worried that Android 13 would finally break compatibility with these older apps, but I’m happy to report that’s not the case. They all work just fine, even though the prompts about compatibility still exist.

Obviously, your mileage might vary, and there’s no way to test every old mobile game for compatibility with Android 13. But things are looking good so far, so if you are worried that you might lose compatibility with some aging apps once you update to Android 13, you’re probably safe.

Samsung has done wonders with its recent One UI 5.0 update. The rollout has been uninterrupted for weeks, with countless Galaxy phones and tablets receiving Android 13 on schedule or even ahead of time.

This fast and steady rollout hasn’t come at the cost of performance or system stability. We’re happy to report that, on a first impression, the Galaxy Tab S7 FE user experience has improved thanks to One UI 5.0. And once you update to the latest firmware, you will benefit from slightly better performance, sensible UI changes, and a better Samsung DeX experience.

You should be able to install One UI 5.0 on the Galaxy Tab S7 FE in Europe via the Settings app on your tablet, or you can download the firmware from our website if you prefer manual updates.

If you’re considering buying a Samsung tablet but aren’t sure which one you should pick, you may want to check out our year-end Galaxy tablet buyer’s guide. You may also find something useful in our general Samsung gift guide for the festive season.