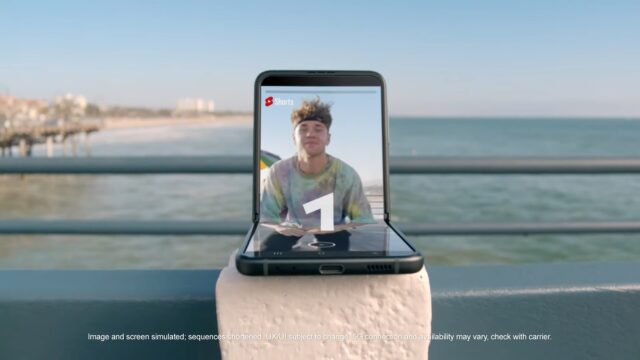 Samsung has published a new video advertisement for its new foldable phones, the Galaxy Z Flip 3 and the Galaxy Z Fold 3. The video primarily shows how Google’s apps are a great way to experience improved multitasking and productivity on foldable devices.

The video starts off by showing how the Galaxy Z Fold 3 can be placed half folded on a flat surface while watching videos so that there is no need for a kickstand. Then the video shows how you can use up to three apps side by side for improved multitasking. You can use the optional taskbar for faster app switching. The Galaxy Z Fold 3 can be placed on any flat surface while using its cameras, removing the need for a tripod while making short videos on YouTube Shorts or TikTok. The same goes for video calls, especially while using Google Duo, which is optimized for Flex Mode.

This new video is a part of a collaboration between Google and Samsung. The two companies are trying to increase the popularity of foldable phones through groundbreaking hardware and intelligent software. With One UI 3.1.1, Samsung improved multitasking and productivity features on its foldable phones.

Google recently showcased a new version of Android—Android 12L—that’s specifically designed for large-screen devices like the Galaxy Z Fold 3 and the Galaxy Tab S7. It offers multi-column UI in various parts of the OS to take full advantage of bigger screens and offer more information in the same view. Here’s the list of Samsung devices that are eligible to receive the Android 12L update.