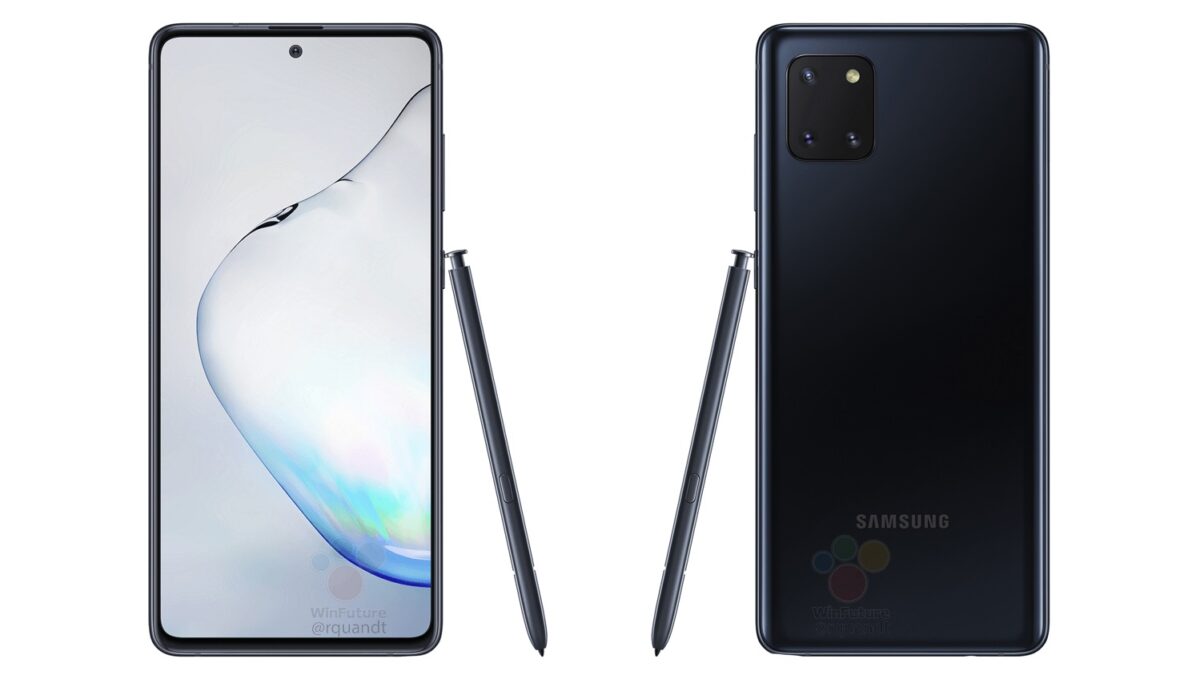 Samsung’s unusual S Pen-enabled phone is going to have a rectangular camera cutout for the rear-facing modules, a design element that’s completely different from the Galaxy Note 10 series. The camera system comprises three sensors and an LED flash.

Galaxy Note 10 Lite appears to have a relatively flat display

The design looks similar to the 3D Glasstic language, at least as far as the metal frame and rounded back panel corners are concerned, but it remains to be seen if the choice of materials will fall in the Glasstic category. Either way, the display looks flat, or at the very least, it doesn’t seem to have a dual-edge curved panel like the Note 10 series does.

What the Galaxy Note 10 Lite seems to share with the full-fledged Note 10 is the choice of colors, including black, red, as well as Aura Glow. There’s also a similarly-looking S Pen, but the internal hardware could differ as the new stylus might have Bluetooth 5.1 with location tracking capabilities.

The Galaxy Note 10 Lite seems to follow the 2020 design formula closely, not only because of the redesigned camera module but also the button placement. All of the physical buttons are placed on the right side of the frame. This is something we expect to see with the Galaxy S11. The Galaxy A51 and Galaxy A71 have already made the switch. However, even if it may look like a phone from next year, the device could launch before the end of 2019.

This is the first time in years for the Galaxy Note series to step anywhere below the flagship segment, allowing more budget-conscious buyers to enjoy the S Pen and all of the software features that accompany it. The phone will reportedly launch in Europe for around €650, which would make it considerably more affordable than the standard Galaxy Note 10. But will it be worth it? You’ll have to wait for our review to find out, so stay tuned.

Update: According to new information, the Galaxy Note 10 Lite is going to cost 629 euro in Europe, that’s approximately $700. The handset is likely going to be released in the coming days alongside the Galaxy S10 Lite.