Galaxy S10 series getting another update with August security patch

Samsung is rolling out a second software update with the August security patch for the Galaxy S10 lineup in some markets. The same update, which is identified by software version G97*FXXU3ASH6, is also rolling out as the first August update in other countries that didn’t get the previous release. These countries include Colombia, Australia, and Belgium; Italy and Serbia, meanwhile, are on the list of countries that also got the previous August update.

As has been the case before, Samsung has simply copied over the changelog from earlier Galaxy S10 updates, mentioning stability improvements for Wi-Fi, camera, and Bluetooth. We couldn’t find anything new or different other than the renaming of the Call and Message Continuity feature, found in the Advanced features menu of the phone settings, to Call and text on other devices. Samsung announced in its Samsung Members community earlier this week that Call and Message Continuity would be getting renamed, and it’s likely going to happen for other Galaxy devices as well.

The Galaxy Note 10 and Note 10+ already have the new — and simpler — naming for Call and Message Continuity out of the box. However, it doesn’t look like any of the actual new functionality from the Galaxy Note 10/10+ is included in the latest Galaxy S10 update. Those are likely to arrive as part of the Android 10 update, which is already in development for the Galaxy S10 series. Samsung could bring some of it — like the camera features, such as Night mode for the telephoto and front cameras — with a regular security update, but we can’t be sure until such an update comes out.

To grab the latest update for your Galaxy S10e, Galaxy S10, or Galaxy S10+, open the Settings app on the phone, go into the Software update section, and tap Download and install. The over-the-air release can take time to reach all users, so be sure to try again after a while if you do not get the update right away. You can also skip the queue and upgrade your phone using a Windows PC by downloading and flashing the latest firmware from our firmware archive. 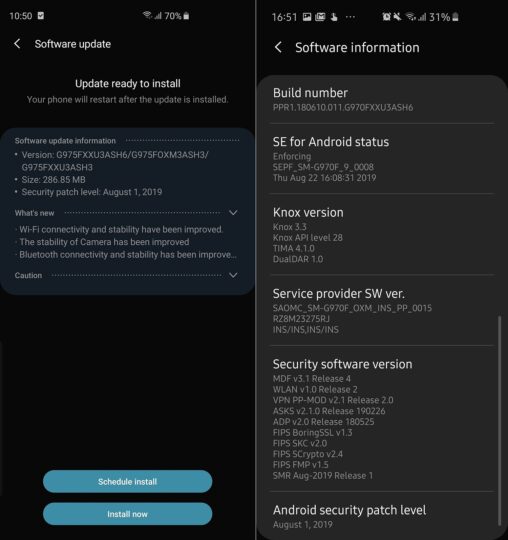 More news »
Looking for a compact flagship? The Galaxy S10e is still a great choice! By Abhijeet M.|2 days ago
Samsung Brazil offers free Galaxy Buds, Watch Active for Valentine’s Day By Mihai M.|2 days ago
A decade of Galaxy S camera improvements in one infographic By Mihai M.|1 week ago
Verizon intros Galaxy S10e BOGO deal with an extra $150 gift card By Dominik B.|2 weeks ago
SamMobile Shop
Opinions More »
Samsung’s in trouble with its diehard fans and they’re running out of patience
2 days ago