Those who have been waiting for the Galaxy M40 Android 10 release will be delighted to know that it’s possibly coming out in the near future. The device has been certified with Android 10 on board. These certifications are usually a good indication of an impending release.

It won’t be the first smartphone in Samsung’s popular Galaxy M series to get the update. Samsung has already released Android 10 for two models. It’s going to expand the update’s availability across the entire lineup eventually.

The Galaxy A40 also received its certification with Android 10 onboard alongside this device. Seeing as how it’s on the list of Samsung phones that will get Android 10, this was bound to happen anyway. Other devices that have been certified with Android 10 recently include the Galaxy S9 and the Galaxy A80.

A firm release date obviously can’t be predicted based on these certifications alone. However, they highlight the fact that the update development process for these devices is pretty far along. It should only be a matter of weeks now before the Galaxy M40 Android 10 release takes place, and indeed, a similar outcome can also be expected for all of the other devices.

The Android 10 update is going to bring One UI 2.0 which comes with a plethora of improvements and new features. Check out our One UI 2.0 feature focus series to find out exactly what’s new in the latest iteration of Samsung’s custom skin. 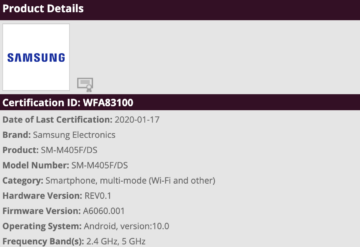 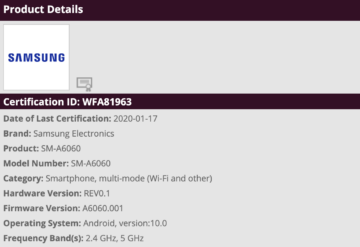 More news »
Samsung resumes Android 10 rollout to Galaxy A50 in India By Asif S.|3 days ago
Samsung resumes Android 10 One UI 2 update rollout in India By Abhijeet M.|4 days ago
Android 10 update rolling out to unlocked variants of Galaxy A20s in the US By Asif S.|2 weeks ago
Galaxy A6 (2018) gets Android 10 firmware update at Sprint, Virgin Mobile By Mihai M.|2 weeks ago
SamMobile Shop
Opinions More »
Galaxy Note 20 might give you a reason to buy the Galaxy Fold 2 instead
1 day ago