The Galaxy S20 series is less than a week away from its official debut and market analysts have already begun evaluating the lineup’s estimated market performance based on preliminary details. In a paper published earlier today, industry analyst firm Counterpoint Research revealed its expectations for Samsung’s upcoming flagship to surpass the Galaxy S10 lineup in sales numbers throughout the first year of availability.

Counterpoint Research expects Samsung to sell over 40 million Galaxy S20s in the first year on the market, exceeding Galaxy S10 sales by a few million units.

Counterpoint Research expects the base Galaxy S20 model to cost $850

It’s important to note that these estimates are based on an ‘expected price tag of $850’ for the Galaxy S20 base model, which would undercut the Galaxy S10 launch price by $50. However, recent reports from other sources claim that the Galaxy S20 is likely to have a starting price of $999. There’s no way to confirm whichever price tag is correct, but we’ll find out soon enough at Unpacked. 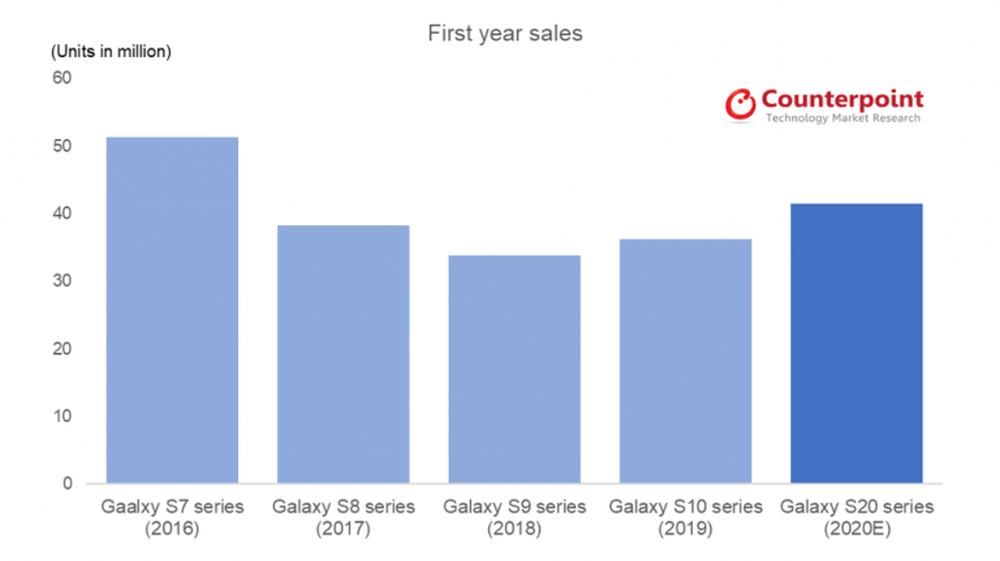 The market research firm expects Samsung’s next flagship sales to be driven by the rumored camera specs and 5G, ‘resulting in another year of growth for a Samsung flagship release.’ The question is whether the 40 million sales estimates would remain unchanged in case the Galaxy S20 base model would launch for a starting price of $999. A $150 price difference is not negligible, especially when it comes to market research.

Either way, there’s always a chance that the Galaxy S20 series will fall below analyst expectations even if it will sell better than the Galaxy S10 did. It happened with the Galaxy S10 itself when analysts from Counterpoint Research determined that it didn’t distance itself far enough from its predecessor. But an $850 base price for the Galaxy S20 would be a recipe for success, and it would likely guarantee 40 million sales in the first 12 months of availability. Samsung needs this more than ever, especially after Apple managed to dethrone it in global shipments throughout Q4 2019.