It’s certainly not like the Cardinal Red color that has recently been introduced for the Galaxy S10 series. Samsung introduced it a few months after the series was launched in a bid to reignite the sales momentum for the flagship.

Samsung also introduced a new Prism Silver color for the Galaxy S10+ in Hong Kong. It keeps the same gradient effect as the Prism White Galaxy S10 with white and red hues at the top and bottom respectively.

What Samsung China is referring to as “Smoke blue” might just be Prism Blue, a color option that has been available for the Galaxy S10 elsewhere since launch. It certainly looks quite similar. We should also note there that this color option wasn’t available when the Galaxy S10 was launched in China. A quick check of the local Samsung website also reveals that the handset isn’t currently available in any shade of blue.

So it could just be that Samsung is finally bringing one of its core color options for the Galaxy S10 and S10+ to China. It may be looking to increase sales in the lucrative Chinese market. The Galaxy S10 has reportedly done well in China so far with sales crossing 500,000 units in the first few weeks alone. 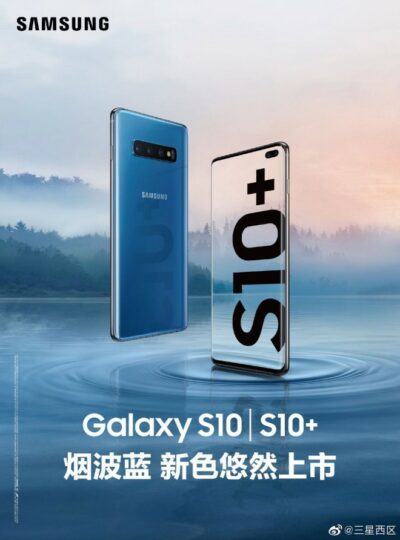 More news »
Samsung set to profit from growing anti-China sentiment in India By Dominik B.|1 day ago
[Updated] Galaxy S10 series now getting the July security update By Abhijeet M.|4 days ago
This is the most thoughtful camera feature Samsung has ever conceived By Abhijeet M.|6 days ago
Ex-Samsung exec cites ‘friendship’ for joining Chinese rival – then quits By Dominik B.|3 weeks ago
SamMobile Shop
Opinions More »
Why buying the Galaxy A21s, A31, A41, or A51 5G makes sense
1 day ago