Galaxy S10 official with in-display fingerprint readers, up to 12GB RAM, and more 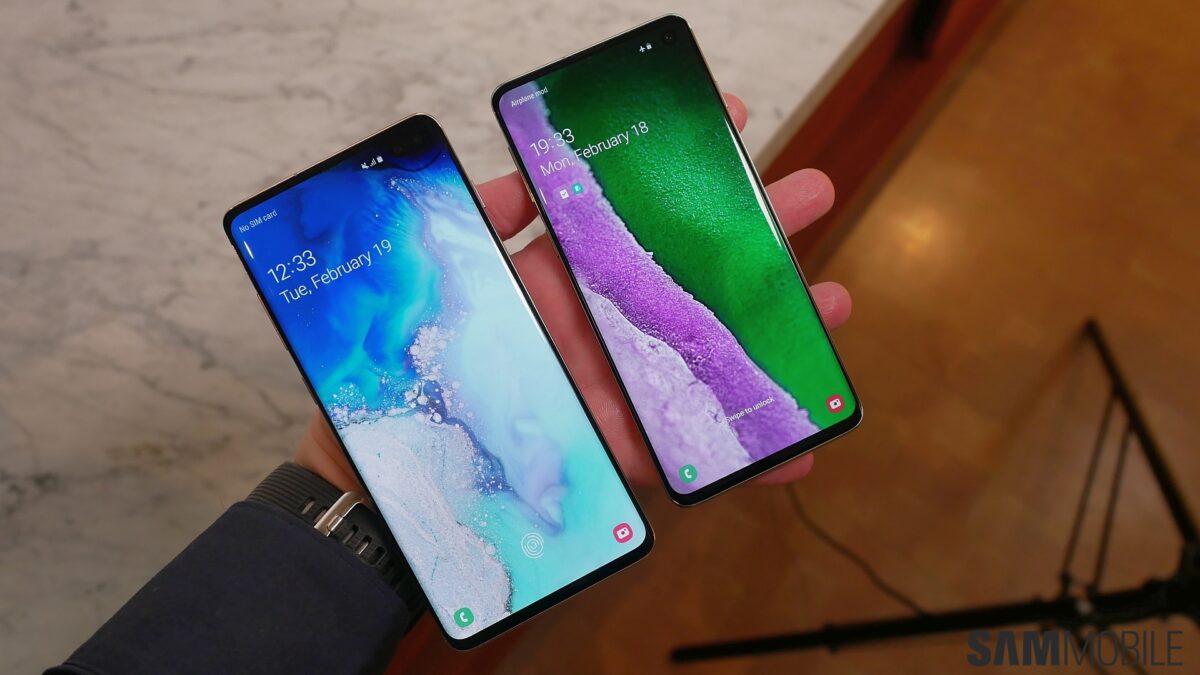 The moment we’ve been waiting for is finally here. Samsung has made its tenth-anniversary Galaxy S flagship official in San Francisco today. The Galaxy S10, as the rumors and leaks had told us, comes in three different variants. There’s the Galaxy S10e, Galaxy S10, and the Galaxy S10+, with the Galaxy S10e slotting in as the entry-level model that misses out on a number of highlight features found on the S10 and S10+.

Infinity-O displays with up to 93.1% screen-to-body ratio 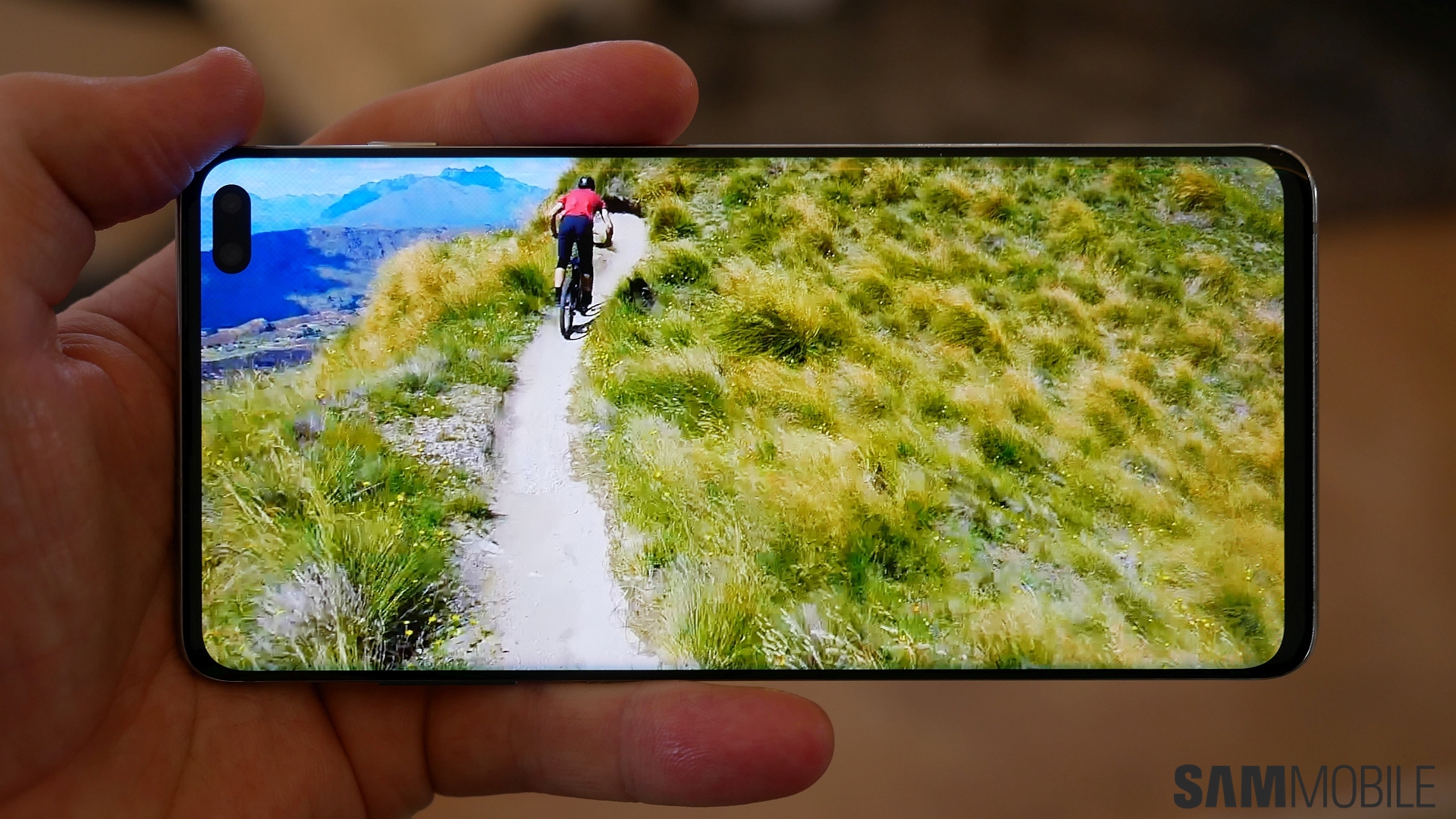 The Infinity-O displays are the biggest change here compared to previous Galaxy S flagships. The Galaxy S10e and Galaxy S10 feature 5.8-inch and 6.1-inch Infinity-O displays with a cutout for the front camera on the right side. The Galaxy S10+ gets a wider cutout on its 6.4-inch screen for its dual front camera. The S10e has a flat display and Full HD+ resolution while the S10 and S10+ have curved QHD+ AMOLEDs, only this time the bezels are considerably smaller to allow for a 93.1% screen-to-body ratio (91.6% on the S10e).

The S10 and S10+ also have ultrasonic fingerprint sensors embedded under the display. The Galaxy S10e has its fingerprint sensor mounted on the right side, built into the power button. Samsung is also throwing around some certifications to tout the quality of its ‘Dynamic AMOLED display’. For example, the Galaxy S10s come with ‘TÜV Rheinland-certified Eye Comfort display’ for lower strain from blue light, while DisplayMate has tested the display’s peak brightness to be as high as 1200 nits. Oh, and all three models get Gorilla Glass 6 protection. 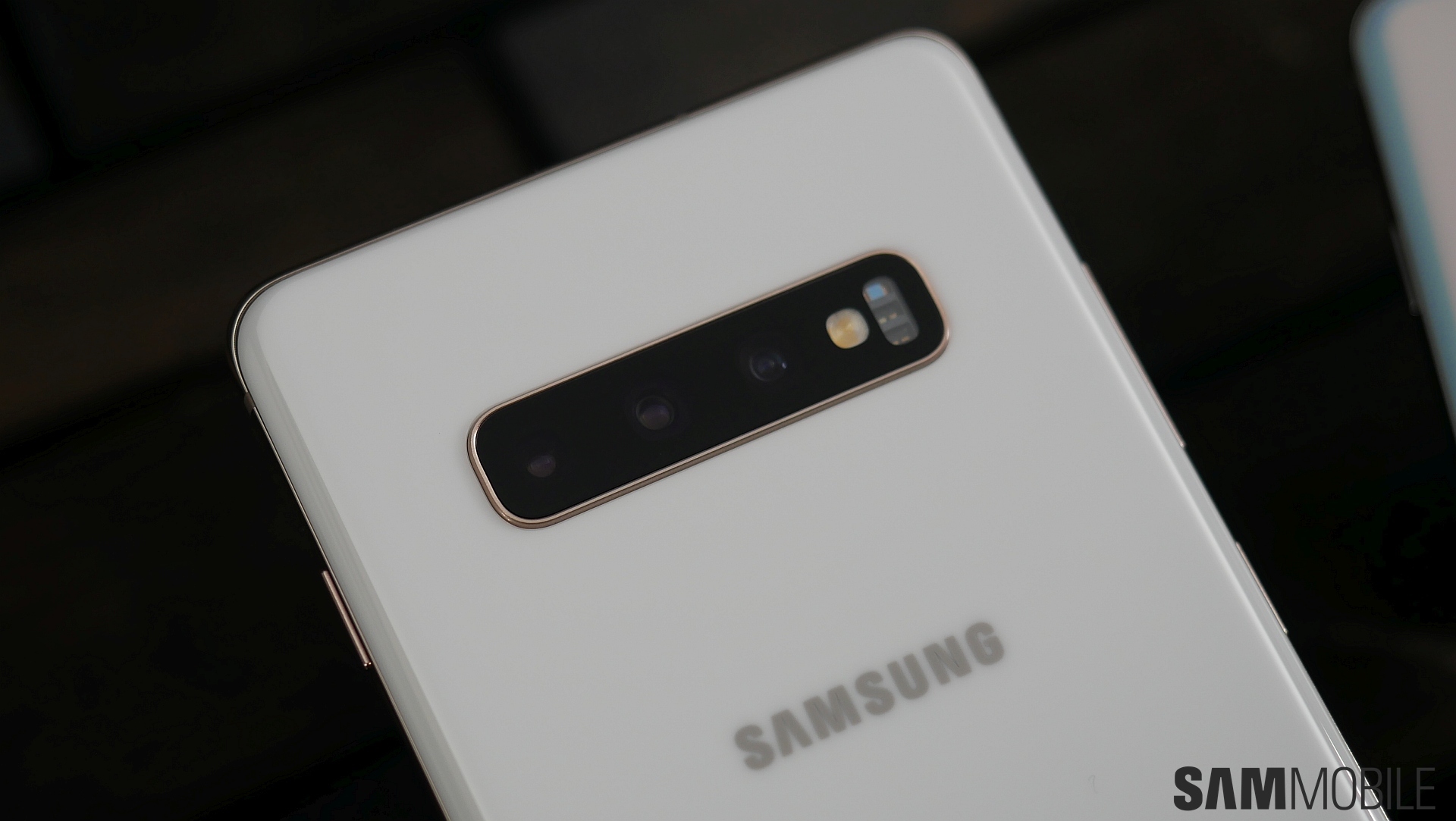 The cameras are also getting a major boost with the Galaxy S10. The Galaxy S10 and S10+ come with a triple-camera setup at the back. Two of those are the same as the Galaxy S9’s: a 12MP F1.5-F2.4 (Dual Aperture) primary sensor with OIS and a 12MP F2.4 telephoto lens, also with OIS. The third is a 16MP F2.2 ultra-wide lens with a 123-degree field of view. The Galaxy S10e gets the primary 12MP sensor and the ultra-wide sensor. Yes, there’s no telephoto lens on this year’s 5.8-inch Galaxy S flagship, either, which is a shame since being able to zoom in on a scene is a very useful feature to have.

The front camera has received a considerable upgrade. The S10e, S10, and S10+ all have a 10MP front camera with Dual Pixel autofocus and 4K video recording, while the S10+ also gets a second front camera, an 8MP depth sensor that will make Live Focus shots possible. Samsung has enabled the cameras to use the dedicated NPU on the Exynos/Snapdragon chips inside the phone for improved AI-enhanced photography. The Galaxy S10 is also the first phone on the market with the ability to shoot HDR10+ videos, and Samsung is touting improve digital image stabilization for video recording as well. 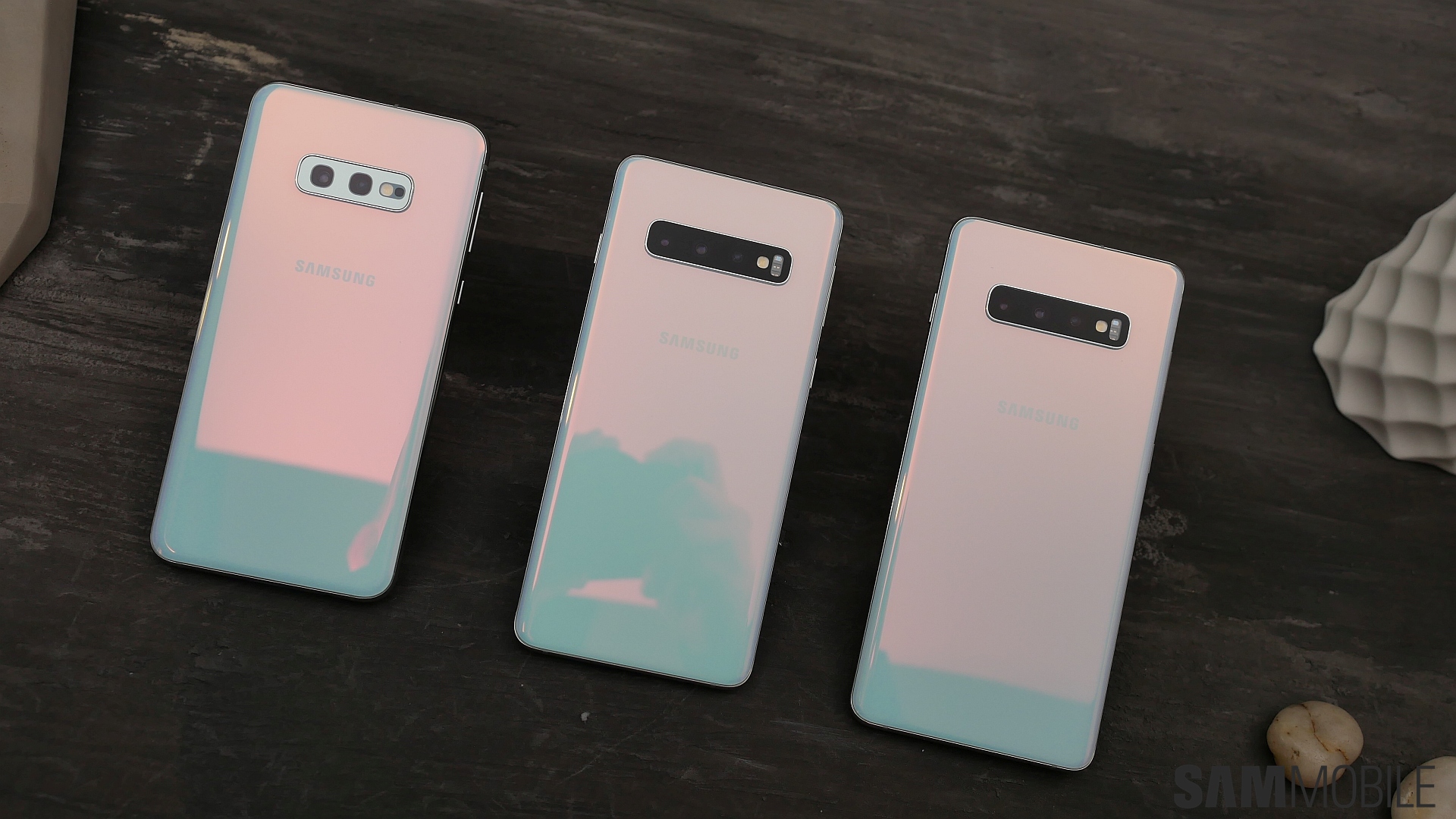 Battery sizes for the S10e, S10, and S10+ are 3,100 mAh, 3,400 mAh, and 4,100 mAh respectively. However, these are typical capacities, so the actual capacity would be similar to the S9, Note 8, and Note 9, so 3,000 mAh, 3,300 mAh, and 4,000 mAh. The Galaxy S10s come with Wireless PowerShare, which enables the phones to charge other devices wirelessly. Samsung is hoping you’ll be using the feature to charge your Gear/Galaxy wearable and the new Galaxy Buds, but sadly, the company is sticking to its existing wired fast charging speeds. Fast wireless charging should be faster, though. 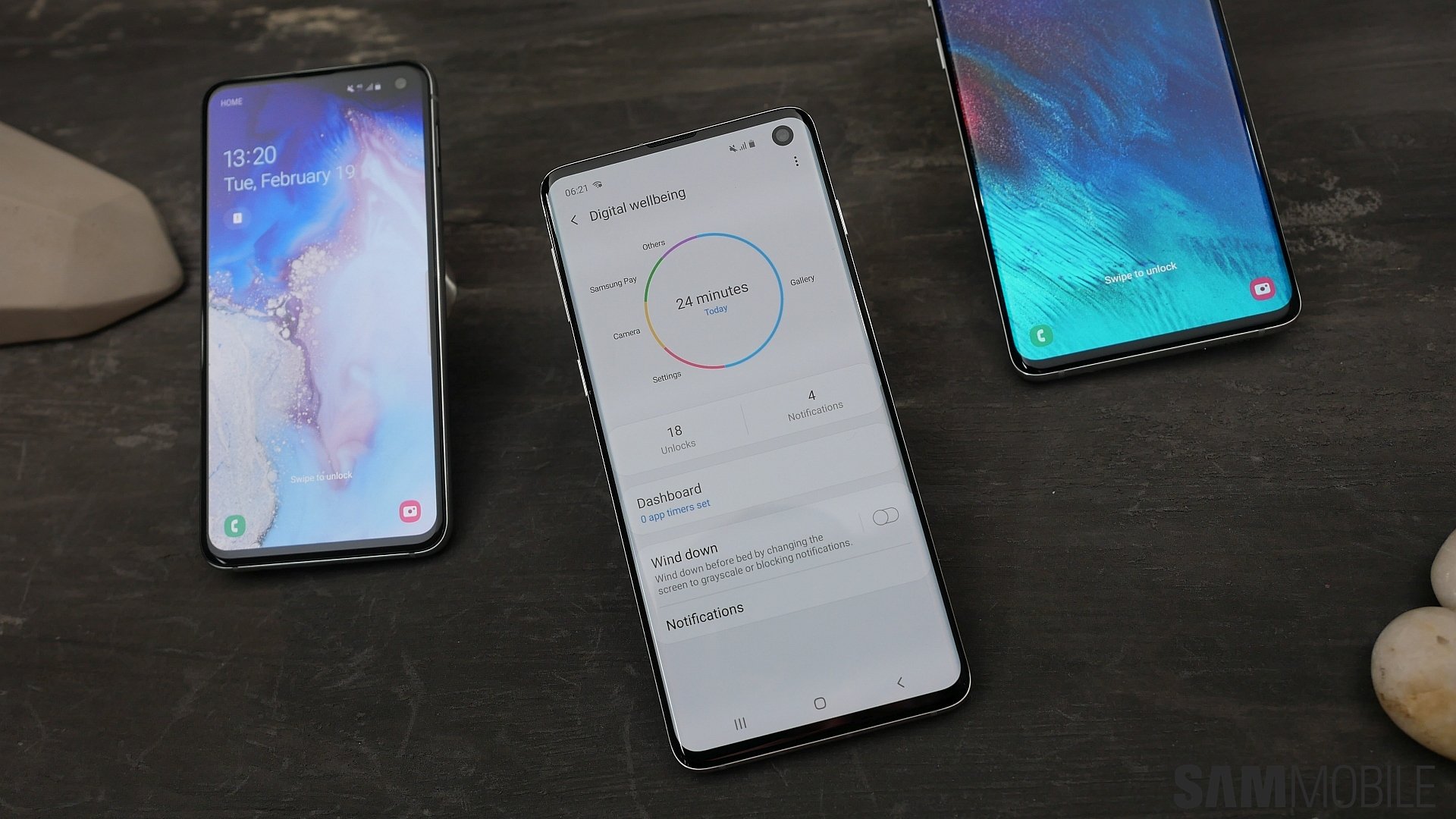 The Galaxy S10 trio run Android Pie with One UI version 1.1. It’s mostly the same as what we see on the Galaxy S9 or Galaxy Note 9, but the S10s get features like Google’s Digital Wellbeing for helping you reduce the time spent on your smartphone screen. The Galaxy S10 also gets something called Bixby Routines, which will attempt to automate things based on your usage habits. Some existing features, like IP68 water resistance and stereo speakers tuned by AKG and with Dolby Atmos, have come along for the ride. Samsung has also added support for Wi-Fi 6 (Wi-Fi 802.11ax) networks.

On sale from March 8

The Galaxy S10e, S10, and S10+ will go on sale on March 8 in select markets in Prism White, Prism Black, Prism Green, Prism Blue, Canary Yellow and Flamingo Pink color options (the Canary Yellow will be exclusive to the S10e). The S10+’ ceramic model will come in black and white. Pricing details can be found at this link, and you can check out our hands-on post to see our initial impressions on the Galaxy S10. For a comparison of the specs of all three models, check out the table below.