Galaxy S10 has seemingly been caught in the wild

There has been no shortage of render and case leaks concerning the Galaxy S10. We have today what might be the first true image of the Galaxy S10 out in the wild. The device seen in this image does line up with the expectations that people have for the Galaxy S10. It has slim bezels and a camera cutout in the top right corner.

The source mentions that this is the device codenamed “Beyond 1,” or the Galaxy S10. We already know that there will be three models of the next flagship. A Galaxy S10 Lite, Galaxy S10 and Galaxy S10+.

It’s also known from earlier reports that the Galaxy S10 is going to feature a 6.1-inch display. The screen protectors that were recently shown in a video suggest that the display curves won’t be as pronounced as they’ve been on earlier Galaxy S flagships.

The Galaxy S10 will be Samsung’s first flagship device to feature the Infinity-O display. Samsung has already released one device with this display though, it’s the Galaxy A8s. However, that phone is only limited to China. The Galaxy S10 will obviously be making its way across the globe.

Samsung’s Infinity-O display does away with the notch by placing the front camera inside a hole in the active display area. It’s believed that this camera cutout may also be adorned with the same animations that we have already seen with the Galaxy A8s. It does allow for increased screen real estate but the chin does retain some heft to it.

It’s also claimed that this model has the ability to wirelessly charge another device. Samsung will be calling this feature PowerShare.

Do bear in mind that this image comes from an unofficial source and it could be of an early prototype. Nothing is set in stone until there’s official imagery to go on. That won’t arrive until the handset is actually announced. Samsung is likely going to unveil the Galaxy S10 at the Mobile World Congress 2019 in Barcelona next month. 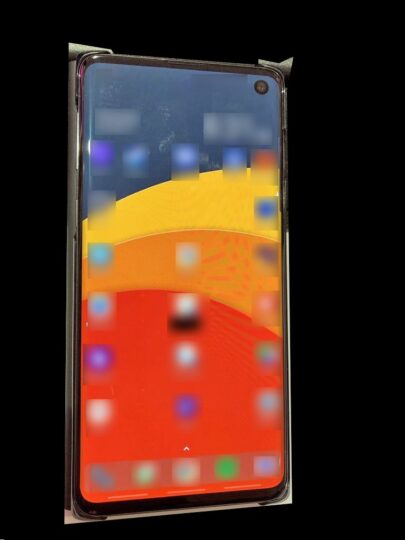