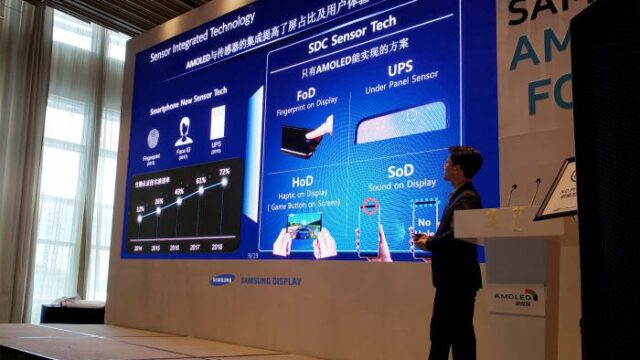 The Sound on Display Samsung OLED panels could arrive in 2019. Samsung has already revealed this technology earlier this year. It uses vibration and bone conduction to transmit sound in smartphones.

Sound on Display is one of the methods that Samsung has been considering to kill the notch. The company provided a few details about this technology at the Samsung OLED Forum conference in China a couple of months back.

Sound on Display Samsung OLED panels for smartphones and TVs

It was reported back in May that Samsung is ready to commercialize its sound-emitting OLED technology in 2019. The latest report from South Korea suggests that the Sound on Display Samsung OLED panels will be demonstrated at CES 2019 next month. It appears that Samsung might showcase these panels for both smartphones and TVs. It’s expected that products with this technology will be released later on in the new year.

It has a lot of potential for use in smartphones. Manufacturers are trying hard to maximize as much of the front real estate for the display as possible. That’s why the Infinity-O display will be a major trend in 2019. Being able to eliminate the speaker will enable them to claw back additional space for the display.

LG has already showcased a prototype of its Crystal Sound OLED TV at CES last year. Even Chinese display manufacturers are believed to demonstrate similar products at CES 2019. LG is developing these panels for notebooks and monitors as well in addition to smartphones.

The Consumer Electronics Show 2019 will take place from January 8 through January 12 in Las Vegas.