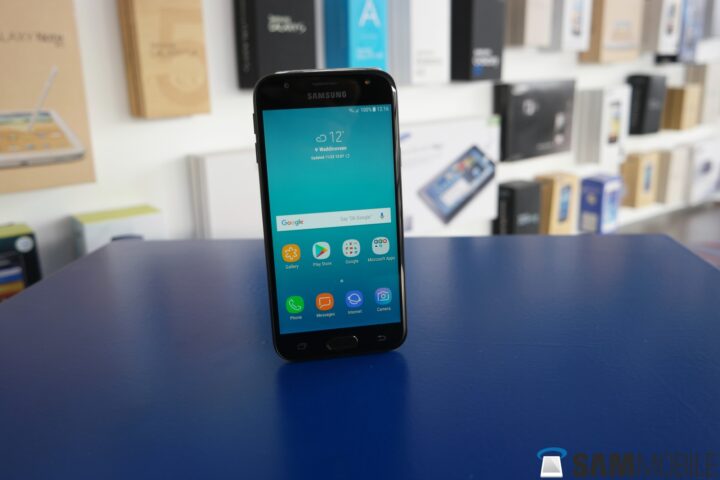 With the new J3, even Samsung’s cheapest phone has a metal housing. This shows us how much Samsung’s design philosophy has changed over the past years. It wasn’t that long ago when even Samsung’s flagship phones were plastic from the front, back, and sides. Because the Galaxy J3 is made of metal, I would argue that it feels way more premium than the Galaxy S5 (which might not mean much to those who thought the S5 was the ugliest of all Galaxy S flagships).

As you might have guessed by now, the frame and the backside are made of metal. The top and bottom of the J3’s rear side use rubber to help antenna reception. Because the J3 is built like a rock, just as the J5 and j7, this phone feels better than the more expensive devices from the A series. The 5-inch screen on the J3 makes this phone just a bit bigger than the Galaxy A3 (2017), which features a 4.7-inch display.

The rear of the phone doesn’t show fingerprints unless light hits it at the right angle, but it will scratch rather easily if you don’t use a case. This isn’t a big downside in my opinion, so I agree with Samsung’s decision to use a metal back. Moreover, the metal build is a big step forward, making Samsung’s budget phones better value for money. 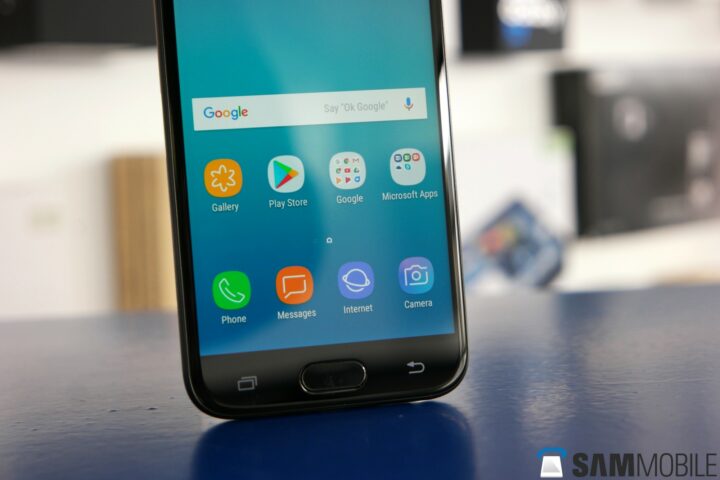 This isn’t something we often say about displays on a Samsung device, but the J3’s display is a weak point. This is because Samsung didn’t opt to put an AMOLED panel in this Galaxy. Instead, the company chose to use an HD (1280 x 720 pixels) LCD display. Because the pixels in this display are arranged in RGB format, the sharpness looks just a bit better compared to an AMOLED screen with Samsung’s PenTile pixel arrangement. The screen is fine, but nothing more than that. 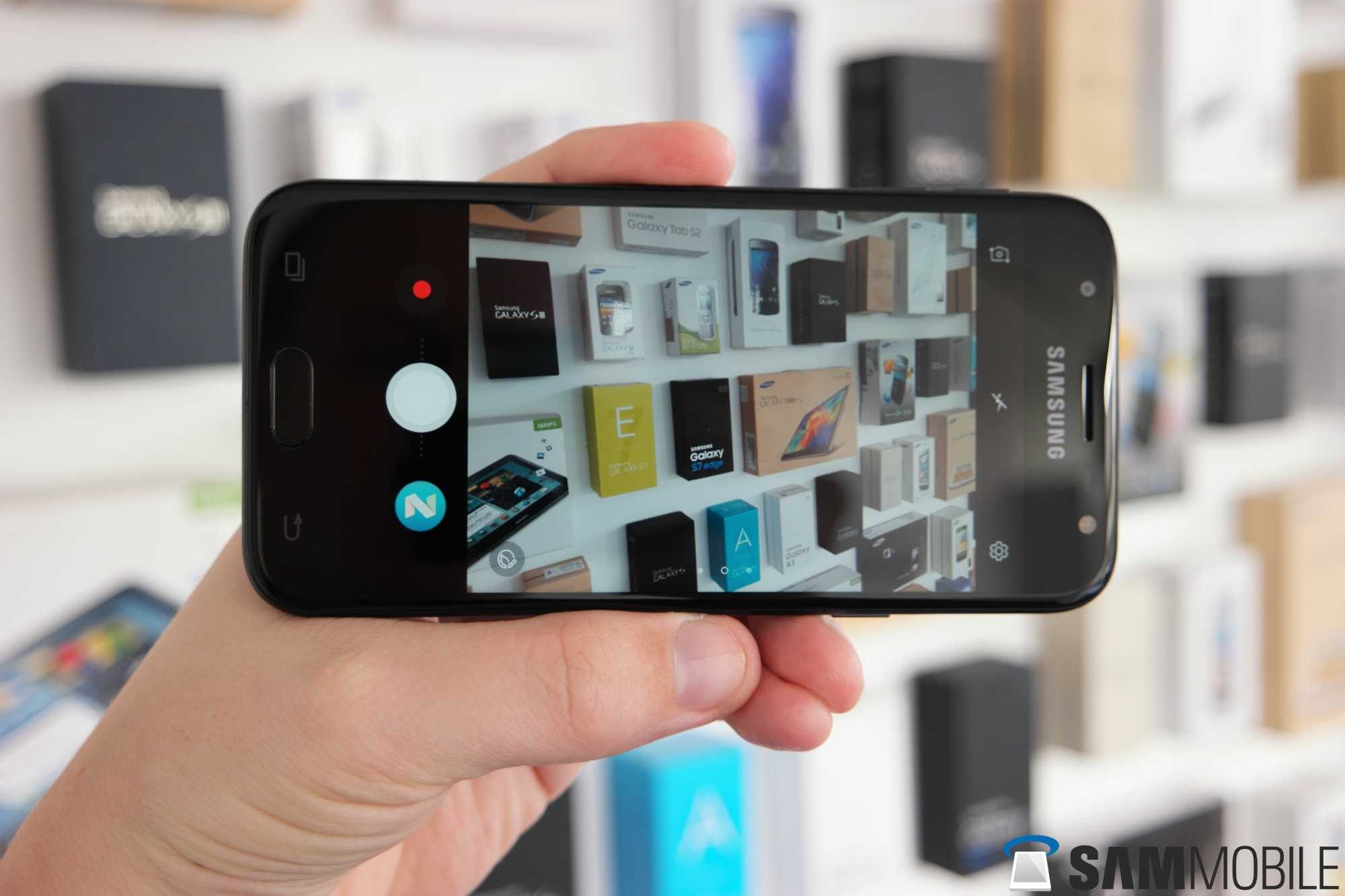 The cameras on the J3 (2017) do everything they need to. They take decent photos for social media, but won’t amaze any experienced photographers. The 13-megapixel sensor on the rear captures enough detail but suffers in low-light conditions. Videos have a maximum resolution of Full HD and look good enough for a cheap device.

The 5-megapixel selfie camera consistently took good photos, even in conditions with not-so-ideal lighting. This is possible because there is an LED flash above the screen for taking selfies. And no, this flash isn’t as blinding as you would think it is (since it’s more of a bulb that glows continuously instead of flashing when you take a picture). All in all, the J3 isn’t a phone you should be buying because of its camera. But if you do buy it, you know its cameras are capable of taking the occasional picture. 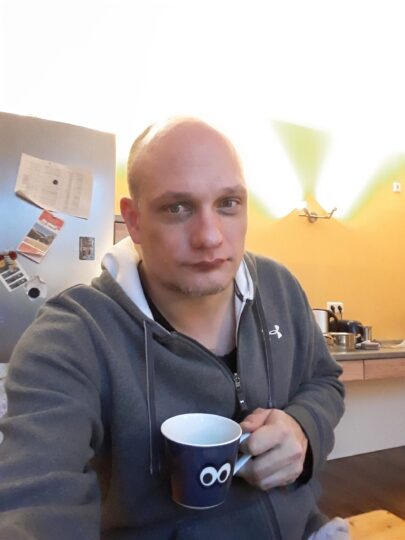 The J3 (2017) is running Android 7.0 Nougat with version 8.1 of the Samsung Experience UI. Because the software is quite similar to that on the Galaxy S8, we have features like Secure Folder, a Theme Store for changing the way the interface looks, and Device Maintenance for keeping your phone as fast and clutter-free as possible. There’s even the good old FM radio, which has been missing from Samsung’s flagships for a long time now. 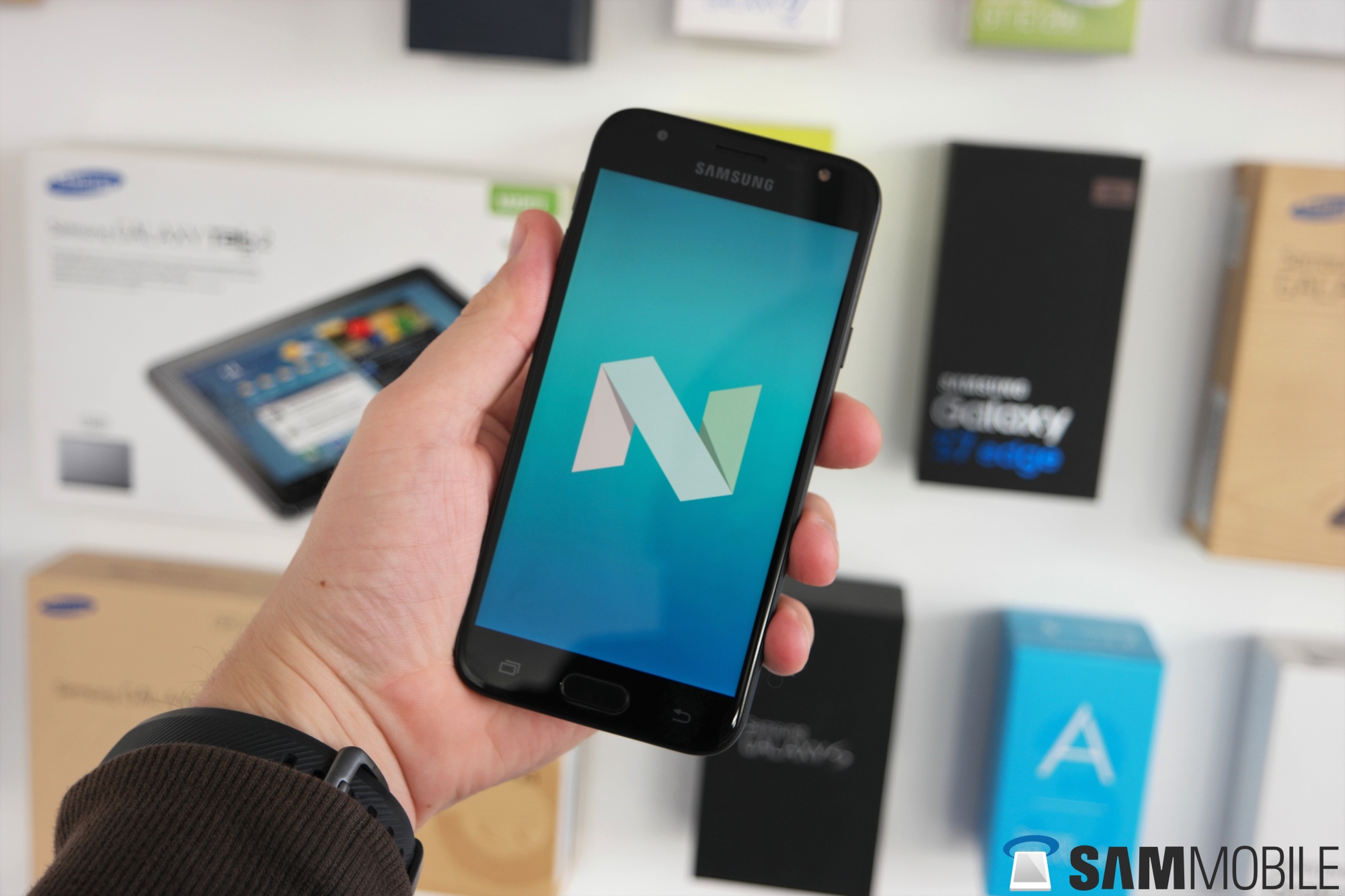 The interface and menus are intuitive and easy to understand. You can choose between having all applications on your home screens or having a dedicated app drawer accessible by swiping up on the home screen. Under the Device Maintenance menu in the settings, you can clean your phone by deleting unnecessary files. McAfee’s malware scanner is installed out of the box for enhanced security (a needed feature given Samsung’s budget phones do not receive monthly security updates in most markets).

Then there’s Secure Folder for hiding all your important files in a separate container that no one else can access without your password. After unlocking the device, you’ll need to unlock the secure folder separately, making this folder ideal for storing documents and keeping away certain applications from your children. Because the J3 doesn’t have a fingerprint scanner, you are limited to a password or a PIN code for protecting your Secure Folder. 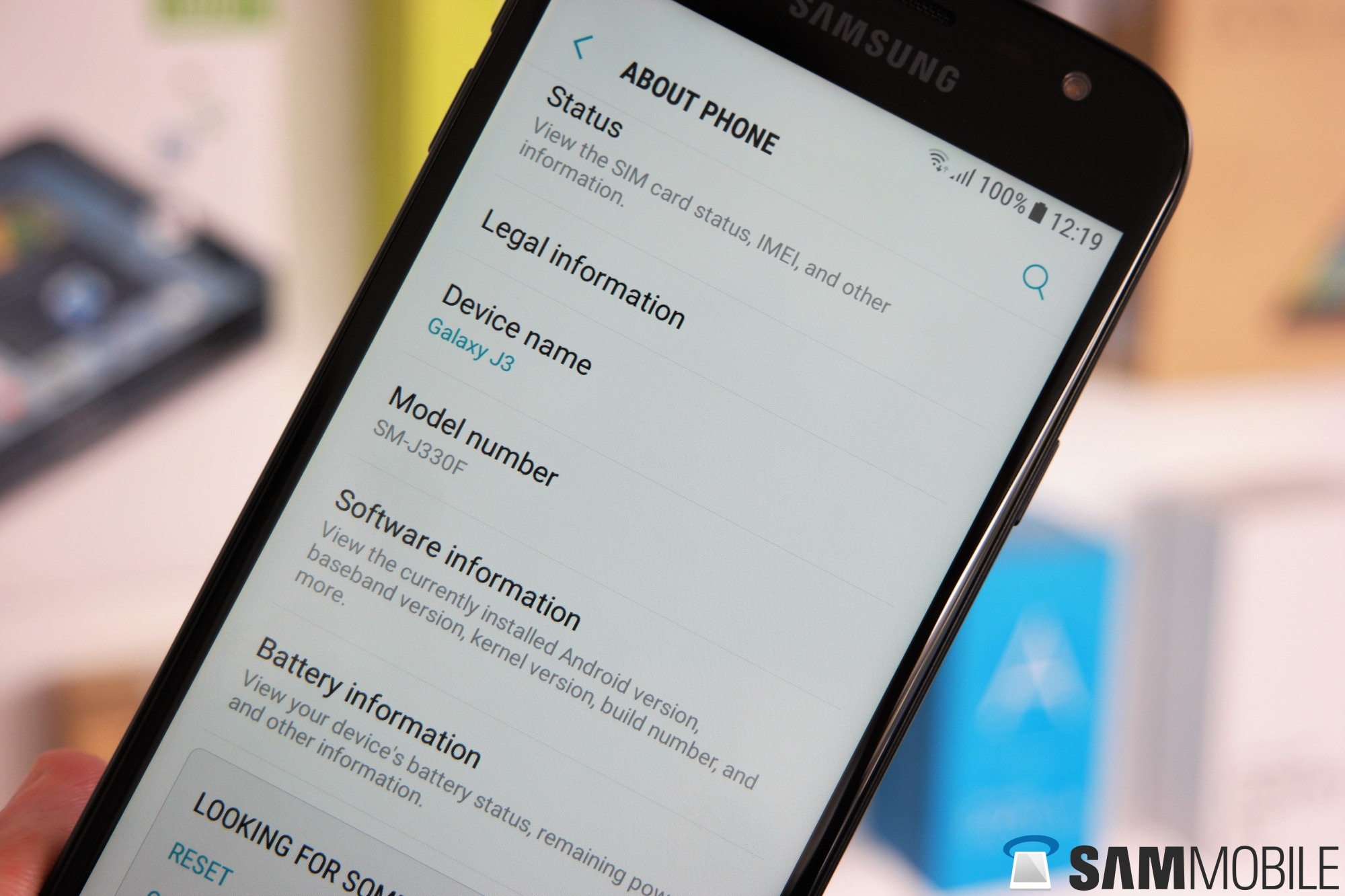 I like the Dual Messenger feature on the J3 (also available on other devices, such as the Note 8). You can install two versions of certain applications, so you can use two accounts inside apps that do not support them, like Snapchat or WhatsApp. It works great, and both accounts work inside separate applications.

According to Samsung, the J3 (2017) will receive software updates until July 2019. It is hard to say if those updates will consist of big upgrades to the next Android versions or small security upgrades. Nevertheless, receiving updates for the coming two years is a nice thing to have, even if the phone won’t be on a monthly update schedule. 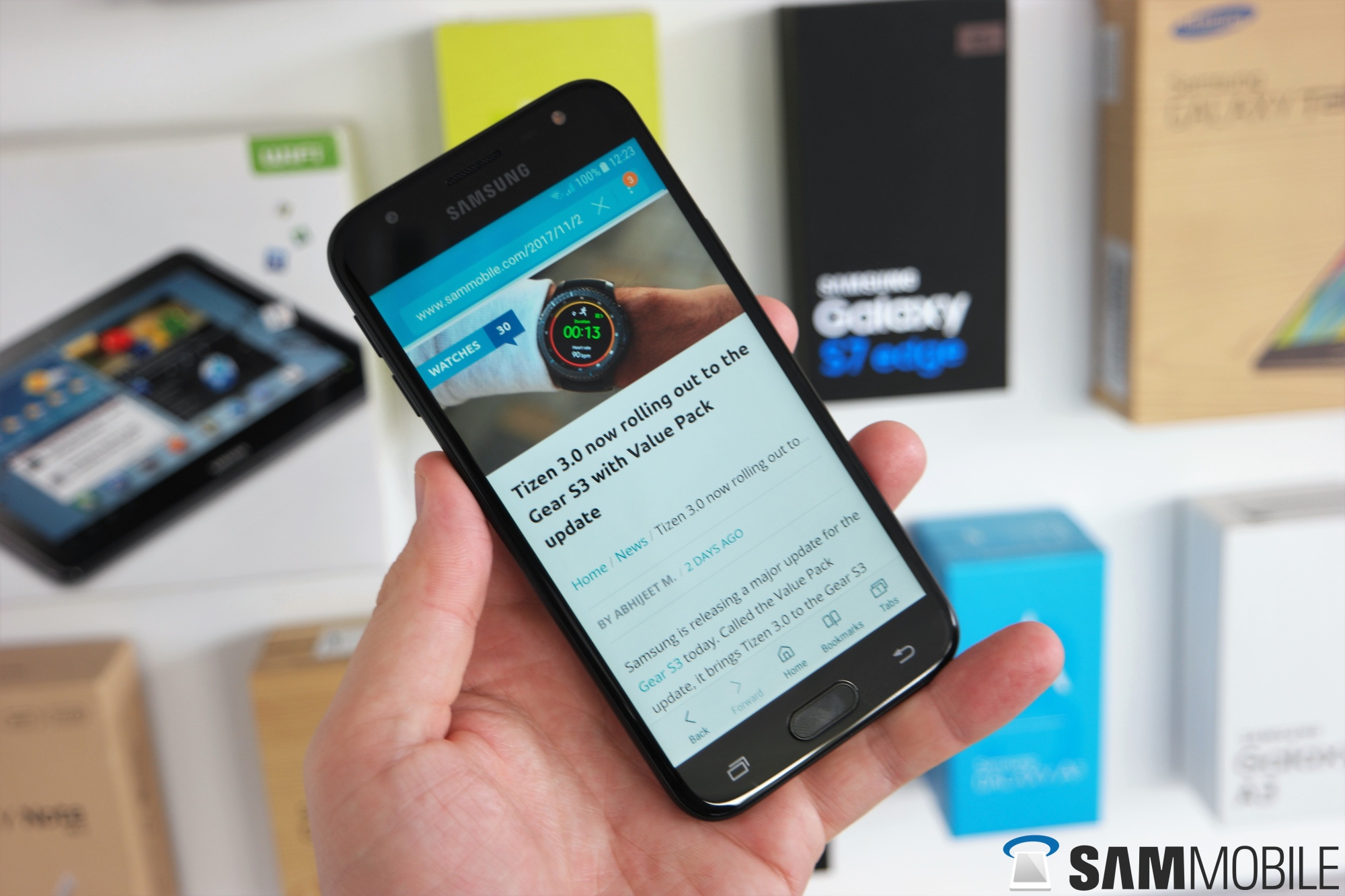 Under the J3’s hood is a quad-core Exynos 7570 processor. This processor is very energy efficient but isn’t quick at all. This makes the phone good for calling, text messaging and other light tasks. Because it has 2GB of RAM, web browsing with several tabs and switching between apps is possible, but not the best experience. If you like gaming or other graphically intense tasks, you should save up extra money and go for a more expensive phone. 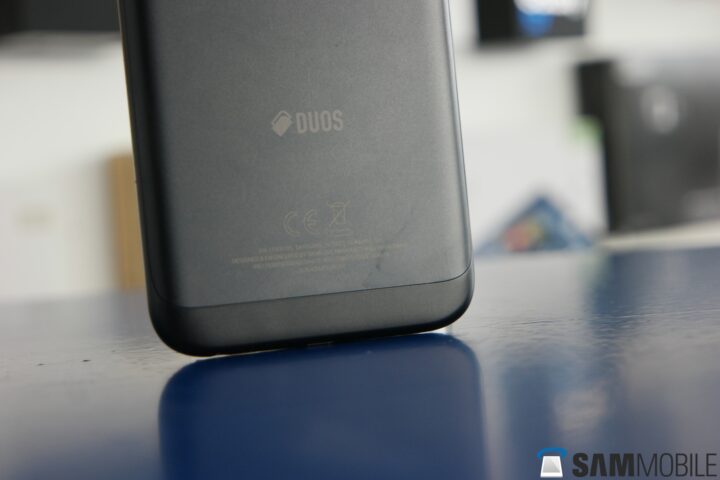 The Galaxy J3 (2017) has excellent battery life; this is partly because of the modest hardware, of course. The battery inside the J3 has a 2,400 mAh capacity, which is enough to last a full day with the kind of hardware the phone has to power. Do note that an LCD uses more battery when watching a movie, so battery life when streaming Netflix or YouTube isn’t as good as you would expect.

Just like with most modern Samsung phones, the rear cover of the J3 isn’t removable. Meaning that replacing the battery yourself isn’t possible. Charging the J3 via the microUSB port is relatively fast, even though this phone doesn’t have fast charging, no doubt because of the not-so-large battery capacity. 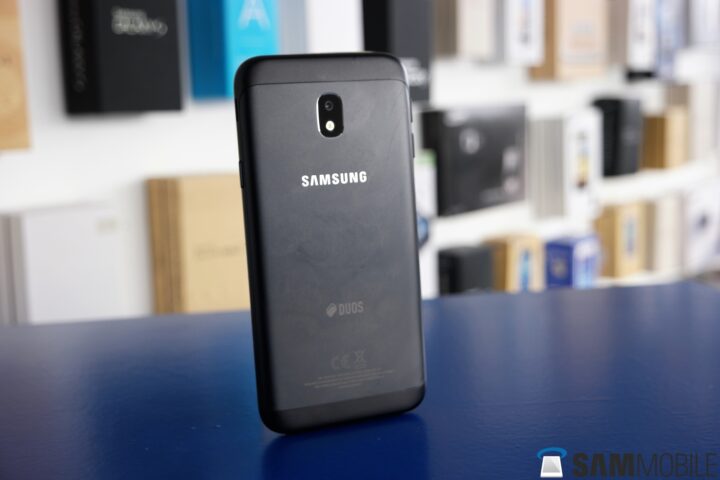 All in all, the Samsung Galaxy J3 (2017) is a solid, affordable phone. Both the build quality and software are big improvements over last year’s J3. This Galaxy feels very premium and shows how good Samsung has become with its craftsmanship. The software is intuitive and has some cool features; more importantly, it’s at par with flagships like the S8 for the most part.

It is a shame that Samsung decided to get rid of the AMOLED display we saw on last year’s model. It would’ve made for an even better device in my opinion. On the flip side, it is likely that a lot of people shopping for a cheap phone have no idea what an AMOLED display is, so these customers won’t feel like they are missing out on a great feature. You should be able to find a few non-Samsung alternatives that offer more bang for the buck, but if the Korean company’s phones are the ones you prefer and your budget is limited, the J3 (2017) is an ideal purchase.