Countless reports have claimed that Samsung is going to offer the Galaxy Note 8 with 256GB of internal storage. Some have suggested that this particular model will only be offered in select markets. The 256GB Galaxy Note 8 has surfaced online yet again, this time in what appears to be marketing material for pre-order customers in South Korea.

The leaked poster details the incentives that pre-order customers in South Korea will get if they put money down for the new handset. Those who opt for the Galaxy Note 8 with 256GB storage will be able to choose between an AKG Bluetooth speaker or a Nemonic printer.

The 64GB model, which will be widely available to customers across the globe, will also be sold in South Korea. Customers who pre-order that model will receive a coupon of 100,000 won or $90 which can they use to purchase a Gear VR, a 5,100mAh fast charge portable battery back or a LED Cover for the Galaxy Note 8.

Samsung’s pre-order incentives for the Galaxy Note 8 are going to vary by market so in some countries customers might walk away with a 256GB microSD card. The company is going to officially unveil the Galaxy Note 8 tomorrow so all of this will be cleared up soon enough. 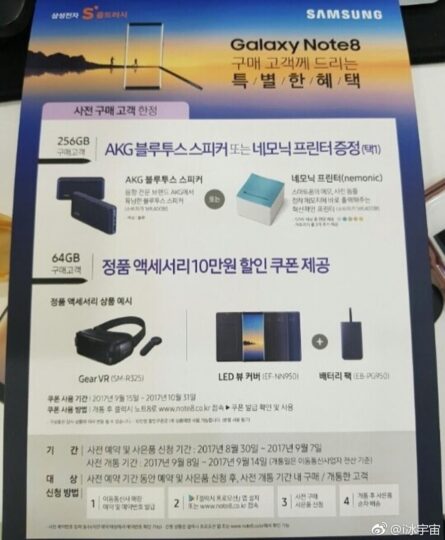