While it has been known for a long time that Samsung would be launching a refurbished version of the Galaxy Note 7, what hasn’t been certain is the name that the Note 7’s chance at a second life would carry. At first, it was expected to be dubbed Galaxy Note 7R, and the device even showed up on a benchmark with that title. Then, a report came out saying the refurbished edition would launch as the Galaxy Note FE, with FE said to stand for ‘Fandom Edition’. Well, it turns out that report was almost a hundred percent accurate, only the F in FE will stand for Fan instead of Fandom.

The confirmation of the final name comes from a poster for the device that was spotted in China. Fan Edition is certainly a befitting title. The refurbished Note 7 will allow Samsung to limit the environmental impact of discontinuing its seventh-generation Note flagship, while allowing fans of the Note lineup – at least in some markets –  to get their hands on the Note 7. Well, a Note 7 that won’t double up as a potential fire hazard, although leaks and rumors suggest this will come at the cost of a smaller battery that may or may not get you through an entire workday on a single charge.

The Galaxy Note FE is expected to be launched on July 7, possibly with an ‘R’ engraved on the back of the device to indicate that it is a refurbished unit. It could be delayed by a couple of weeks according to a recent rumor, but we’re guessing Samsung will not be waiting around too long as the Galaxy Note 8 is just over two months away. 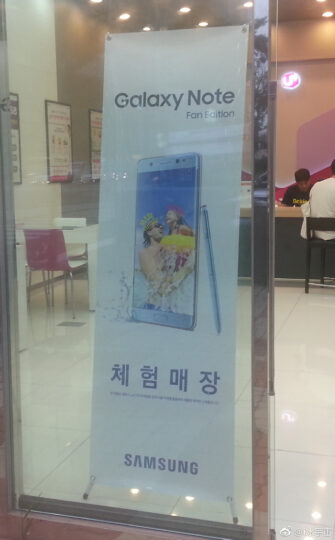