Samsung Galaxy S8 Active gets certified by the Wi-Fi Alliance

Soon after our exclusive reveal that the Galaxy S8 Active was in the works (not that we take too much credit, as it isn’t very surprising that Samsung is continuing the Active line of Galaxy S phones), the device’s user agent string was spotted online. Now, the S8 Active has obtained the necessary certification from the Wi-Fi Alliance, putting it one step closer to its official reveal.

Like the user agent string, the Wi-Fi certification doesn’t reveal any details except that the phone runs on Android 7.0 Nougat (and that it has the model number SM-G892A). If we follow the trend, the Galaxy S8 Active should have the same major specs as the Galaxy S8 while getting a battery that’s larger than the S8+ (a 4,000 mAh cell, like the S7 Active, is plausible). It should also have MIL-STD-810G certification for advanced protection against damage, in addition to the IP68 water and dust resistance carried by the S8 and S8+. However, it remains to be seen if it will feature the Active key of its predecessors, in addition to the Bixby button. 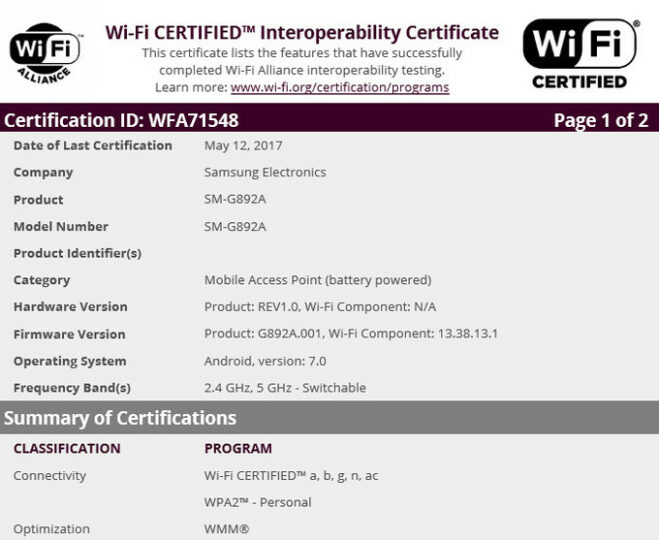