We picked up on a rumor out of China earlier this week which claimed to reveal the Galaxy Tab S3 specifications. It was claimed that the upcoming tablet would be powered by an Exynos 7420 processor with 4GB RAM. We’re seeing a conflicting report today as the Galaxy Tab S3 has now been spotted on the benchmarking website GFXBench.

As per the benchmark result, the Galaxy Tab S3 features a 9.6-inch display with 2,048×1536 pixel resolution and a 2.1GHz Qualcomm Snapdragon 820 processor under the hood hooked up to 4GB of RAM and 32GB of onboard storage. It also reveals that the device could feature a 12-megapixel rear camera and may be running Android 7.0 Nougat from the get go.

It’s pertinent to mention here that only the 9.6-inch variant of the Galaxy Tab S3 has been spotted as far and it remains to be seen if its smaller sibling will make an apperance soon as well. Samsung hasn’t confirmed anything about its new flagship tablets. Hopefully it will have more to share at the Mobile World Congress 2017 in Barcelona next month. 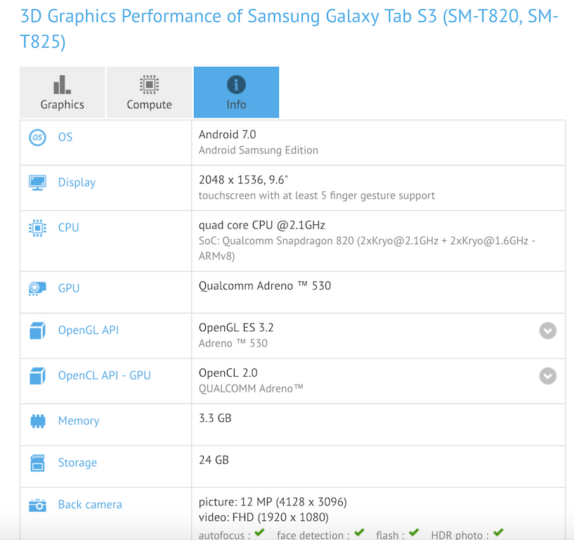