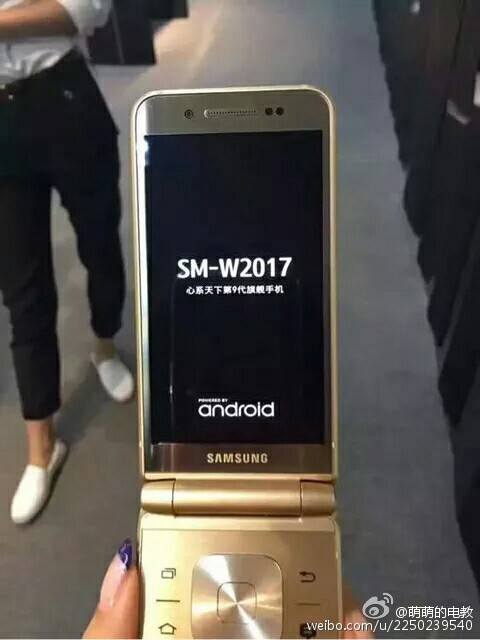 We exclusively reported about three months ago that Samsung has a flagship flip phone in the pipeline codenamed Veyron. The company recently launched its Galaxy Folder 2 entry-level clamshell handset and now it appears to be set to launch this high-end model. Some images of this handset were leaked online two days ago and we’re now seeing a fresh batch of leaked images which give us a good look at the SM-W2017.

The Samsung SM-W2017’s specifications include a Qualcomm Snapdragon 820 processor with 4GB RAM and 64GB of storage. It features a 12-megapixel rear and 5-megapixel selfie camera as well as a USB Type-C port. Additional features include a fingerprint sensor on the back of the device as well as NFC which will add support for Samsung Pay to the SM-W2017. The latest leaked images show off this handset in all its glory and reiterate that it’s going to be offered in a gold hue. Samsung hasn’t confirmed as yet when the SM-W2017 is going to be launched and which selected markets it will be sold in.

We first told you a couple of months ago that Samsung is working on a new flagship flip phone codenamed “Veyron.” Multiple rumors and reports about this device have emerged since then. We have recently seen countless leaked pictures of the SM-W2017 so it no longer remains a mystery. The handset has now received its […]

We first told you a couple of months ago that Samsung has a new flagship flip phone codenamed “Veyron” in the pipeline. Since then we have seen many rumors and reports concerning this handset. Quite a few images of the handset have also been leaked online so it’s not like the handset will come as a […]

Over the past week a handful of leaked images of the Samsung SM-W2017 have surfaced online. It’s the new flagship flip phone that Samsung is working on. It was rumored just yesterday that the SM-W2017 features an Always On Display which Samsung introduced with the Galaxy S7 earlier this year. Today, leaked pictures show that […]

We were the first to tell you a few months ago that Samsung is developing a new high-end flagship flip phone internally codenamed Veyron. Since then we’ve spotted the handset being imported into India for testing and have even seen some leaked images. Its specifications have also been leaked as well. There’s now a new report […]

Samsung recently announced the Galaxy Folder 2 entry-level clamshell smartphone in China. However, the company is also working on a high-end flip phone codenamed ‘Veyron‘, which we exclusively reported about three months ago. Now, live images of the device have been leaked. The SM-W2017, which succeeds the SM-W2016, reportedly features a 4.2-inch Super AMOLED display, a […]

We exclusively reported last month that Samsung is working on a high-end clamshell smartphone codenamed Veyron. Now, the device has been spotted on the Indian import/export listing site Zauba. According to the listing on Zauba, the China-exclusive SM-W2017 features a 4.2-inch display, which is larger than 3.9-inch displays of its predecessors, the SM-W2016 and the […]