We exclusively reported four months ago that Samsung was developing a new BlackBerry Hub-like app called Samsung Focus which would integrate crucial functions like email, contacts, calendars and memos in one place to turn your handset into a productivity powerhouse so that you can get things done faster. We told you about the app’s features and its user interface in detail. It was expected that Samsung Focus would be launched alongside the Galaxy Note 7 but that didn’t happen. Samsung waited for a few weeks after the phablet was launched to release this app. Samsung Focus is out and now available for download via the Google Play Store.

Samsung Focus has all of the features and functionality that we told you about. It’s going to appeal to business users as well since the app provides support for Exchange servers as well as IMAP and POP3 which means that basically all email services are compatible with this app. A powerful search feature is available as well to sort through everything and show you precisely what you need to see. The app is now available as a free download from the Google Play Store. It can only be installed on Samsung handsets running Android 6.0.1 Marshmallow and above. 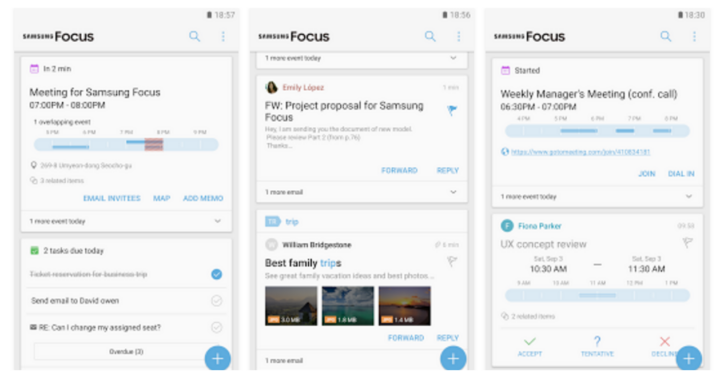