There has been little doubt about the existence of the upcoming Galaxy S7 edge (or its name). Still, confirmation of both by Samsung’s own website is a welcome step towards the final launch.

Samsung has recently added a new section about the edge screen functionality on its own website where the company distributes SDKs and other such tools to developers. This section not only explains several edge screen functions, but also mentions the devices for which they will be available. The usual suspects, the Galaxy S6 edge and Galaxy S6 edge+ are there, as is the Galaxy S7 edge. This confirms the existence (and the name) of Samsung’s upcoming flagship smartphone in one fell swoop.

Moreover, new edge screen features, which are the same as those of the S6 edge models after receiving the Android Marshmallow update, have also been showcased on the website. Next to the regular, narrow edge panels (‘Edge Single’), there will be wider type (‘Edge Single Plus’) panels that offer more information and functionality. These wider edge panels will definitely please those who liked the extensive functionality of the edge screen panels on the Galaxy Note Edge.

It is good to see Samsung actively seeking new and improved ways to make use of a feature that, until now, mostly wowed users with beauty but fell short on with functionality part. The Galaxy S7 edge is off to a good start, it seems. 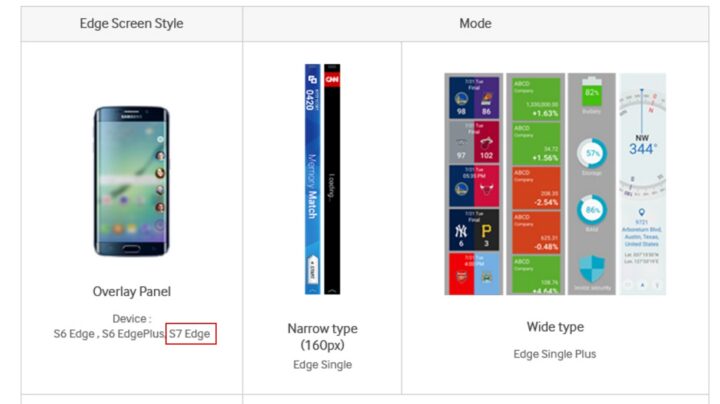