The official announcement of Samsung’s next-generation flagship smartphone is not far away, and there’s no dearth of Galaxy S7-related rumors, leaks, concepts, and reports. Earlier today, we reported some exclusive details about the Galaxy S7 and Galaxy S7 edge‘s display size and price tags. Now, a new concept video has surfaced on the Internet that might showcase the final design of the Galaxy S7.

According to the video and accompanying images, which are allegedly based on the blueprints given by Samsung to accessory makers, the Galaxy S7 with a 5.1-inch QHD Super AMOLED display will be 7.9 mm thin. This thicker shell might be due to a larger battery  and the camera won’t protrude as much as it did in the Galaxy S6. The device is reported to be 142.5 mm tall, 69.5 mm wide, and 8.7 mm thin at its thickest part.

Interestingly, the report claims that the Galaxy S7 won’t feature a USB Type-C connector, but will have faster data transfer as well as charging. The device appears to have curved sides at the back, similar to the Galaxy Note 5’s design, and this will improve the ergonomics. The home button might be more rounded off, but no justification has been provided to back up this claim.

Do you think this will be the final design of the Galaxy S7? Go ahead and watch the concept video of the Galaxy S7, which will be officially announced by Samsung in February. The Galaxy S7 is expected to feature a 5.5-inch curved QHD Super AMOLED display, a 12-megapixel primary camera, and a 3,600 mAh battery. 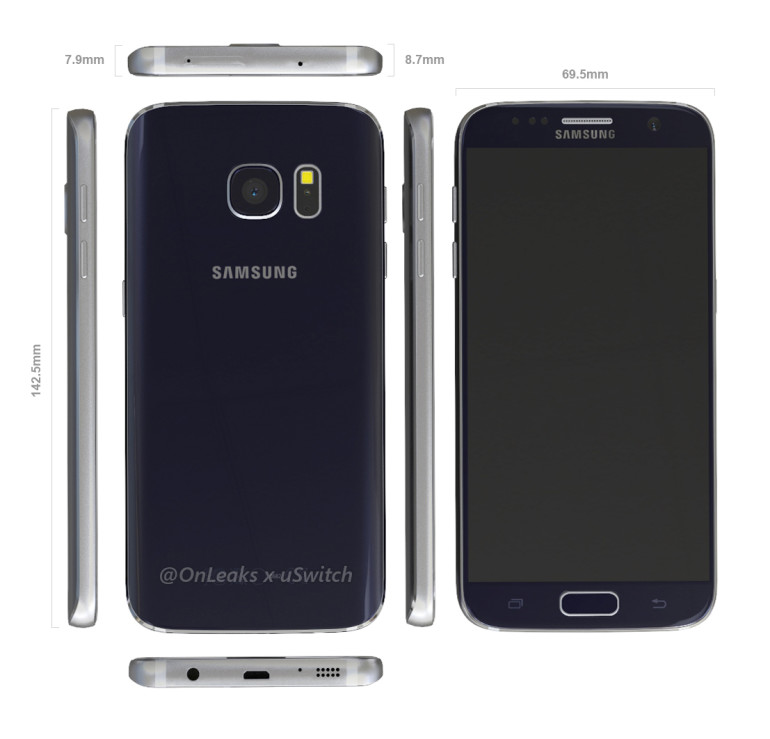