As the launch of Samsung’s next-generation flagship smartphone nears, we are coming across dozens of rumors and reports related to the device. Yesterday, alleged dimensions of the Galaxy S7 and the Galaxy S7 edge were leaked along with some case designs for those devices. Now, ETNews is reporting that Samsung will release the Galaxy S7 in two different form factors in response to Apple’s strategy with the iPhone 6s and the iPhone 6s Plus.

According to the report, the South Korean smartphone giant is working on two devices – HERO1 and HERO2 – and that they will be mass produced starting from February 2016. The Galaxy S7, which is codenamed as HERO1, is expected to feature a 5.2-inch flat display. The Galaxy S7 edge (HERO2) is expected to sport a 5.5-inch dual-edge curved display. However, other rumours report that the S7 edge will be released with either a 5.7-inch display or a 6-inch display.

It is being reported that the development of the device will be fully completed by January 2016, and the company will start mass producing an initial batch of 5 million units in February. Around 3.3 million units will be the Galaxy S7, while 1.7 million units will be the Galaxy S7 edge. Samsung is focussing on increasing the sales of premium models to increase profits from its smartphone business. The company is targeting to sell more than 400 million smartphones in 2016.

The Galaxy S7 is expected to feature a QHD Super AMOLED display, a 20-megapixel camera sensor from Sony with phase-detection autofocus and OIS, 4K video recording, 4GB RAM, 32GB/64GB of internal storage, and LTE Cat. 12 connectivity. The Galaxy S7 is expected to feature a microSD card slot, but it will be absent from the Galaxy S7 edge. Both the devices will be released in two variants, one with an Exynos 8890 chipset intended for European and Asian markets, and the other with a Snapdragon 820 chipset that is intended for American and Chinese markets. 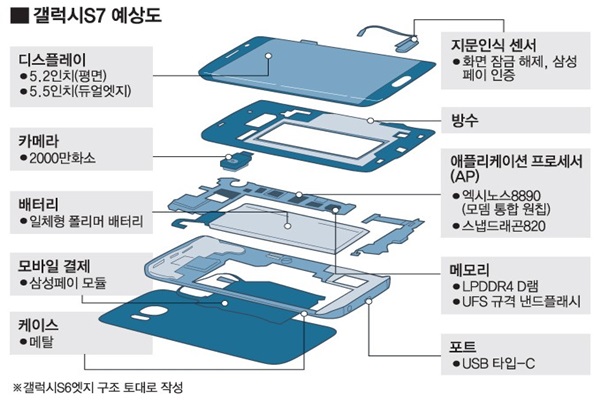