Specifications of Galaxy A3 and Galaxy A7 successors leak

We broke the exclusive news about Samsung working on successors to the Galaxy A3, Galaxy A5 and Galaxy A7 a month ago, and also revealed a list of accessories that will be launched alongside the devices. Our insiders weren’t able to give us any information on the hardware of these upcoming devices, but the GFXBench benchmark database has now revealed the specifications of the Galaxy A3 and the Galaxy A7.

The two phones have shown up with model numbers SM-A310 and SM-A710X and are listed as the Galaxy A3 and Galaxy A7, though these are unlikely to be the final names. The SM-A310 has a 4.7-inch HD display, a quad-core Exynos 7580 chipset clocked at 1.5GHz (the Exynos 7580 is actually an octa-core chip, so this might be an error or a quad-core variant of the SoC), 1.5GB of RAM, 16GB internal storage, a 13-megapixel rear camera, and a 5-megapixel front camera.

The SM-A710X has a 5.5-inch Full HD display, an octa-core Snapdragon 615 chipset and 3GB of RAM, with the rest of the specs the same as the SM-A310’s. Both devices run Android 5.1.1, and they feature a few upgrades over the original Galaxy A3 and Galaxy A7, like the primary camera on the A3 and the increased RAM on the A7. Of course, GFXBench doesn’t give us any idea of when these new Galaxy A phones will be launched, but we should see more details leak as we inch closer to the official unveil. 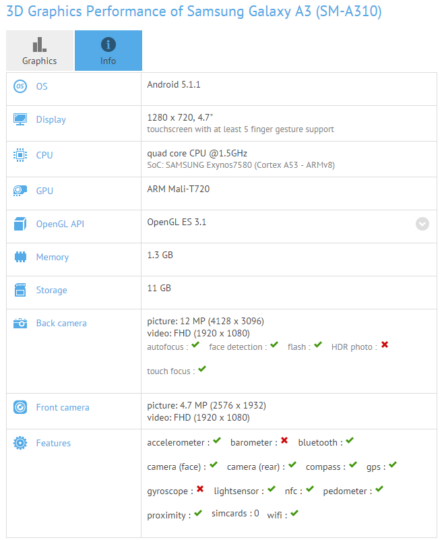