After reviewing the Galaxy S5, folks over at DxOMark have declared it the best smartphone camera. With a score of 79/100, the Galaxy S5 shares the top spot with Sony Xperia Z2. The Galaxy S5 scored 80/100 in still photography. Its images were praised for great exposure, white balance and colour rendering in well-lit conditions.

It comfortably won the video quality section with a score of 79/100 due to its fast autofocus system and good texture rendition. However, the Galaxy S5 was criticized for lack of OIS and uneven colours across the video frame under certain lighting conditions. They declared the videos recorded via Galaxy S5 as “the best mobile video tested to date”. In comparison, the Xperia Z2 scored just 73/100 for its video quality.

DxOMark is a website by DxO Labs which reviews cameras and lenses. DxO Labs is known for its professional image editing softwares such as DxO Optics Pro and DxO ViewPoint.

To refresh your memory, the Galaxy S5 is equipped with a new 1/2.6 inch ISOCELL camera sensor. It uses integrated barriers between individual pixels reducing the electrical crosstalk by around 30 percent. Due to a tendency to bleed photons and photoelectrons between neighbouring pixels, earlier BSI sensors captured images with slight colour inaccuracy and reduced sharpness. 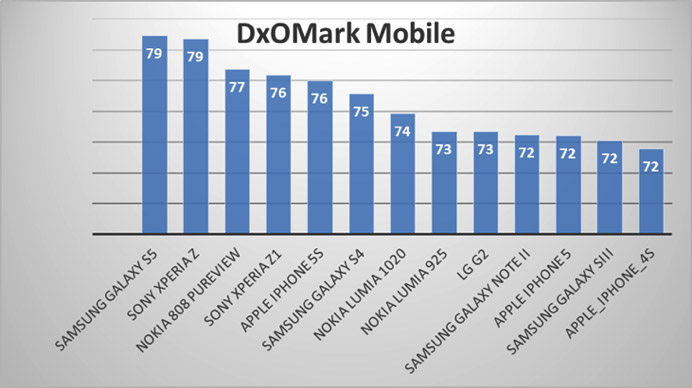