Samsung SM-T700 could be an 8.4-inch AMOLED tablet

Samsung seems to be preparing multiple upcoming tablets with AMOLED displays. We exclusively confirmed details of one of the AMOLED tablets, the SM-T80x, and now a Samsung tablet with model number SM-T700 has surfaced, hinting at the fact that the AMOLED tablet will come in different screen sizes. The SM-T700 specs are pretty much the same as the Galaxy TabPRO 8.4, including the 8.4-inch display of 2560×1600 resolution, according to its listing at GFXBench – reports have suggested Samsung is working on both 8 and 10-inch AMOLED tablets, so it could be that the SM-T80x is the 10.1-inch version while the SM-T700 is sold as the smaller-sized model in the new AMOLED tablet lineup.

The SM-T700’s specs include an octa-core Exynos 5 chipset clocked at 1.9 GHz, 2GB of RAM, 16GB internal storage, a 7-megapixel rear camera (likely a typo, should be 8MP), 2MP front-facing camera, and Android 4.4.2 KitKat (every new device launching in April and later will run on KitKat out of the box, thanks to Google’s recent licensing rules.) As we confirmed earlier, software features like Ultra Power Saving Mode should be present on the tablet as well, though since there are no official details present at the moment, the possibility of the SM-T700 having an AMOLED tablet should be taken on faith instead of as a fact. 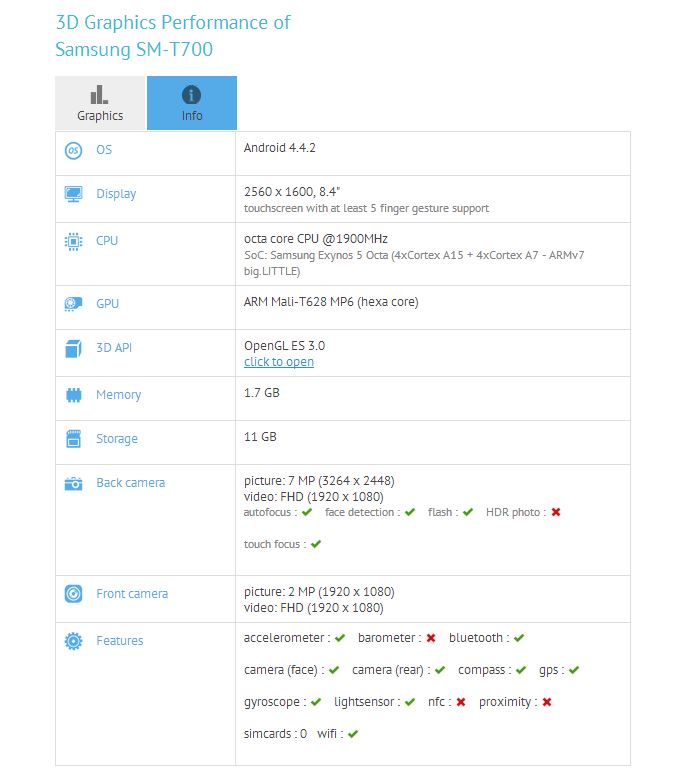