Samsung officially announced the Galaxy Note 3, Galaxy Gear and Galaxy Note 10.1 2014 edition at their Mobile Unpacked Event 2013 Episode 2 in Berlin, Germany. This unpacked event by Samsung is in our opinion the best one we have ever seen from the company, where Samsung was quick to point out how they’ve listened to the consumers to improve and iterate on the new devices. Read on for our first impressions of each of the three new devices, or just head to the bottom of the page to check out the hands-on pictures.

The successor of the Note 2 is packed with powerful hardware and some new software enhancements. Since the launch of the first Note two years back, Samsung has been quite successful with their Note series, which has always had best in class hardware and some unique S-Pen software features. Now almost two years later almost every handset maker is trying to jump into the so-called ‘phablet’ market. Sony is trying it with the Xperia Z Ultra, Huawei with the Ascend Mate, LG is even trying it with 2 products: Optimus VU II and Optimus G Pro, and if we can believe the rumors even Apple is developing a 6-inch iPhone.

With more competition on the phablet market, Samsung had to push their boundaries even further than they’ve done in the past. After the Unpacked Event and during IFA we spent some time with the Galaxy Note 3, our first impressions of the new Note is that it’s a really good product. The new design of the back cover is also quite nice, even though it’s made of plastic it still resembles the look and feel of a leather notebook especially the black version. The back cover has a faux leather texture that handles fingerprints well since it has matte finish. Samsung is planning to release different types of back covers in various colours (like pastel colours.) The silver rim around the device has some vertical lines which resembles a paper book. The Note 3 is just a bit narrower, smaller and a bit taller than its predecessor.

The new software features are also a joy to use. The new Air Command is an easy way to access some S-Pen specific software like action memo, scrapbook, and pen window. One of our favorite features is Action Memo – with this feature you can easily take advantage of your written memo, recognizing your input and, for example, save a name and a phone number in your contacts app. We also liked the new Pen Window feature where you can draw a window on the screen and a select an app like a calculator with will be shown in a floating window – you can move this window around, create more windows, go full screen or minimize them.The multi window multi tasking feature is improved, it supports more apps, supports drag-and-drop and can open specific apps in 2 windows (like the browser with different tabs). Samsung has also released a new feature which is called ‘My Magazine’. With just a swipe upwards on the home screen you will be taken to a gorgeous magazine-like interface (like Samsung Hub) where you can you read the latest news, social updates of your friends and more. My Magazine has 4 categories: News, Personal, Here and now and Social. The rest of the TouchWiz interface is the same as you can find on the Galaxy S4.

The camera is also improved and has even support for recording video in 4K. See below a quick video that we shot with the Note 3 in 4K.

Samsung is planning to release the Note 3 in 149 countries on September 25th.

Overall the new Galaxy Note 3 made an excellent impresson. Even though the software on the demo models isn’t the final software that you can find once you can buy the phone, we still have high expectations from the new Note. 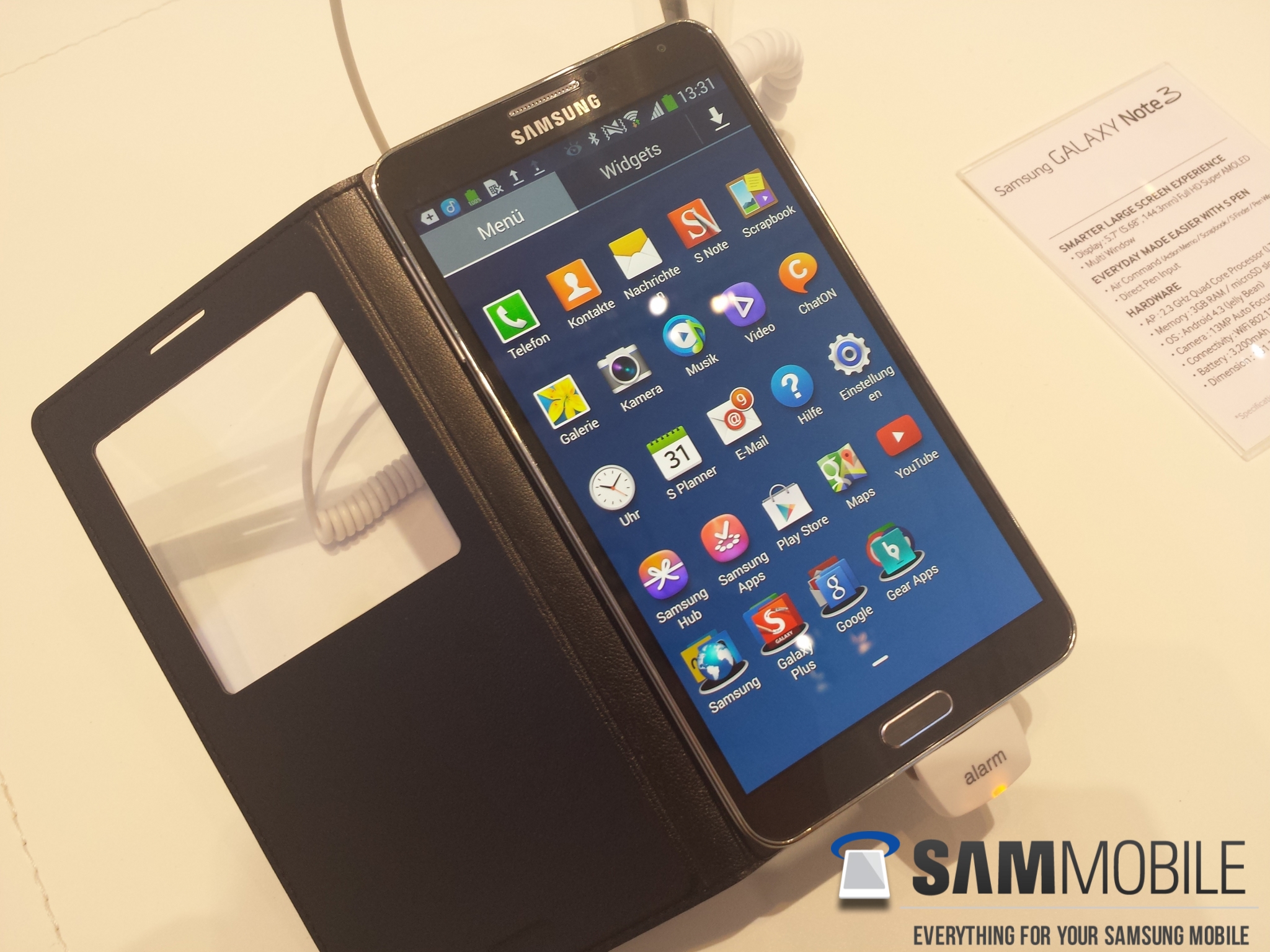 Together with the Galaxy Note 3 Samsung announced the Galaxy Gear, Samsung’s first real smartwatch based on Android 4.3. The Watch comes in plenty of colours and has even a camera! 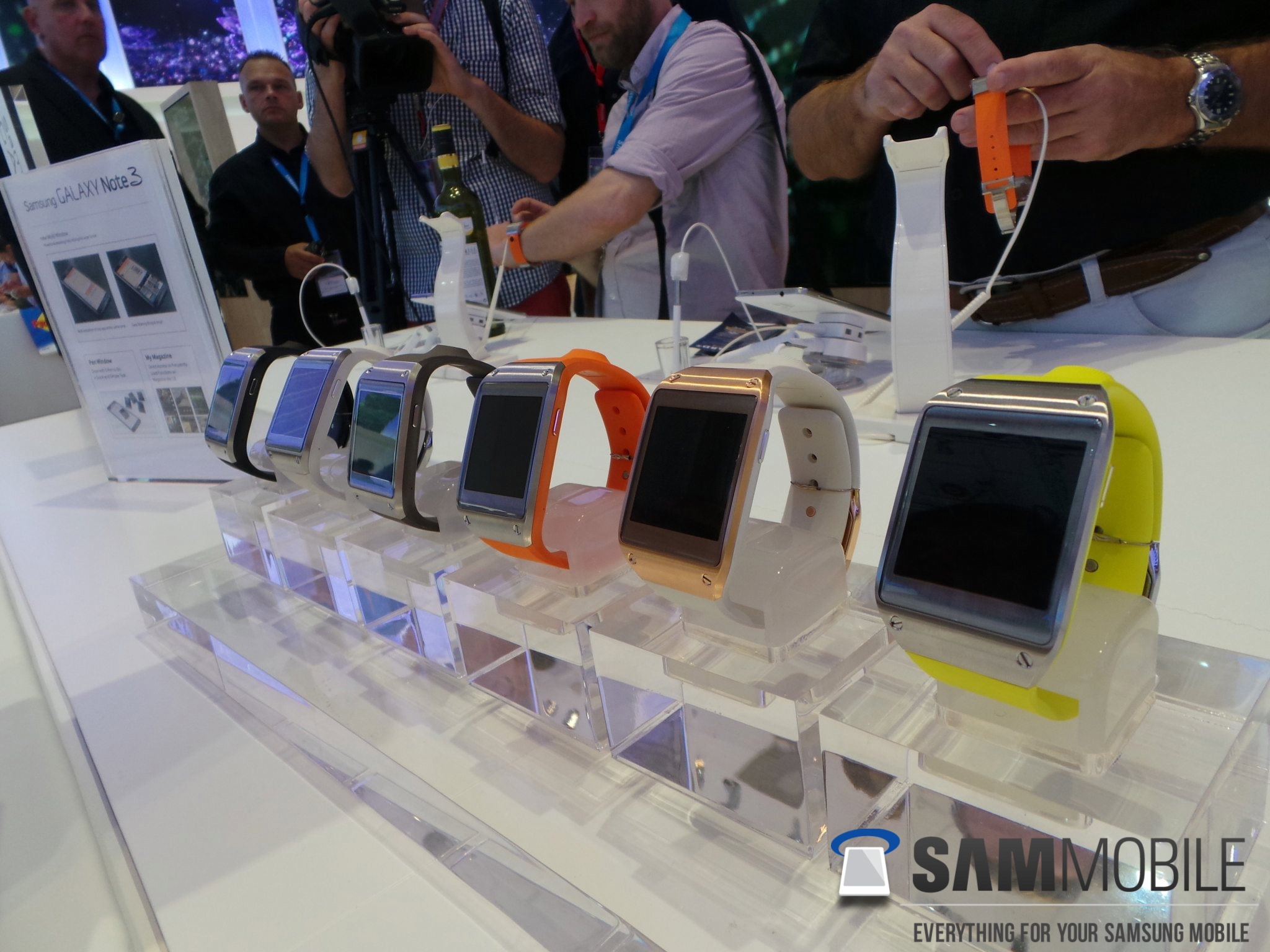 The Galaxy Gear has a 1.63″ Super AMOLED display, which sports a 320 x 320 pixels resolution as expected and complements the nice design of the watch. On the strap you’ll find a 1.9-megapixel autofocus camera capable of full HD recording and macro mode, twin microphones with noise cancellation, and a speaker. We really liked the swipe software of the Galaxy Gear. Everything was easy to use, though we’re skeptical about that small 315mAh battery. 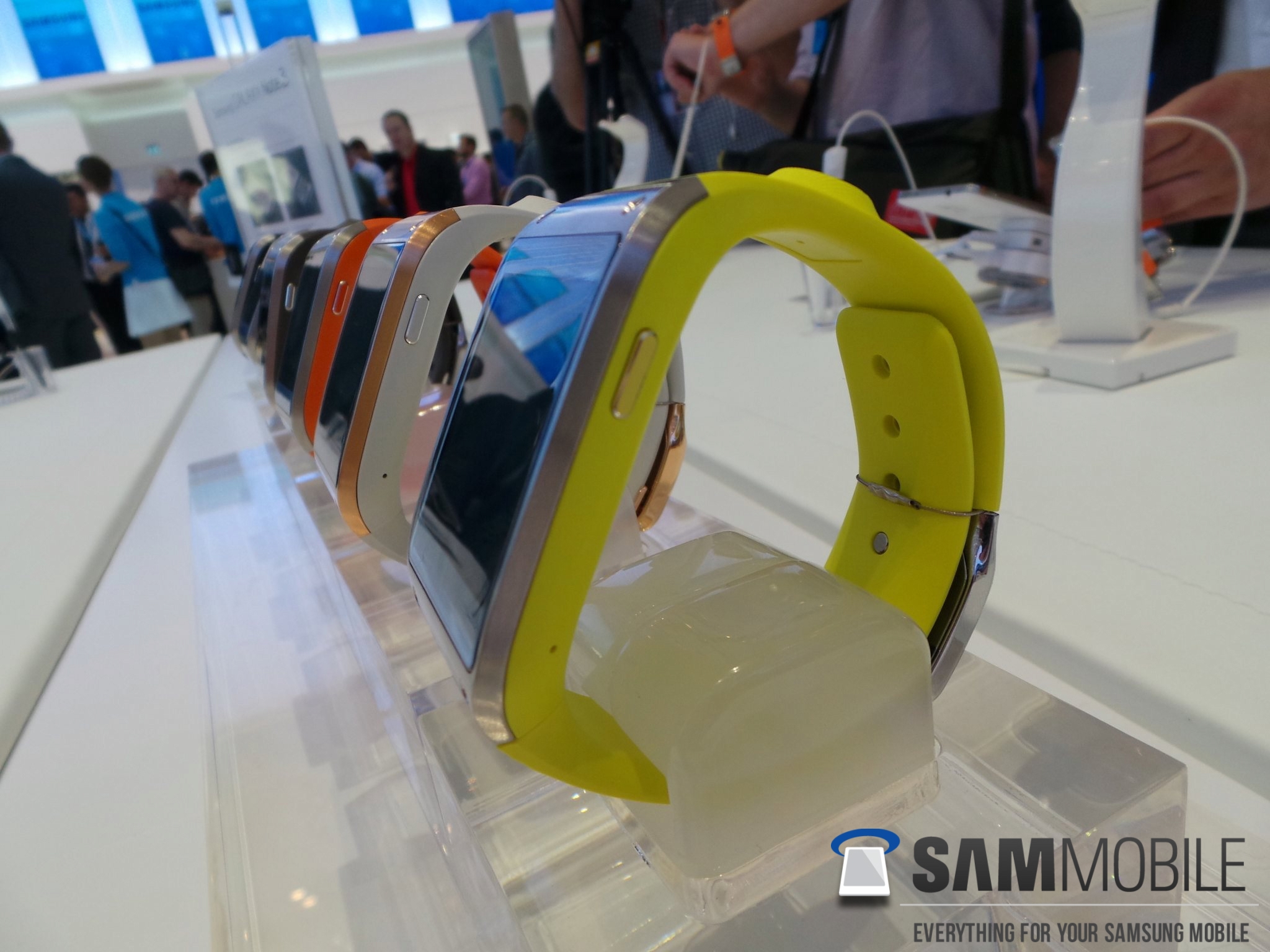 We inquired whether the Gear is waterproof, and got the response that it isn’t but can handle water to some extent. Samsung won’t advertise with this because they can’t guarantee safety against water! Our advice: keep your smartwatch dry or check fast when it rains. We asked whether we could see a waterproof variant in the future – we didn’t get a proper response, but the demo official did hint that it might be a possibility in the future. 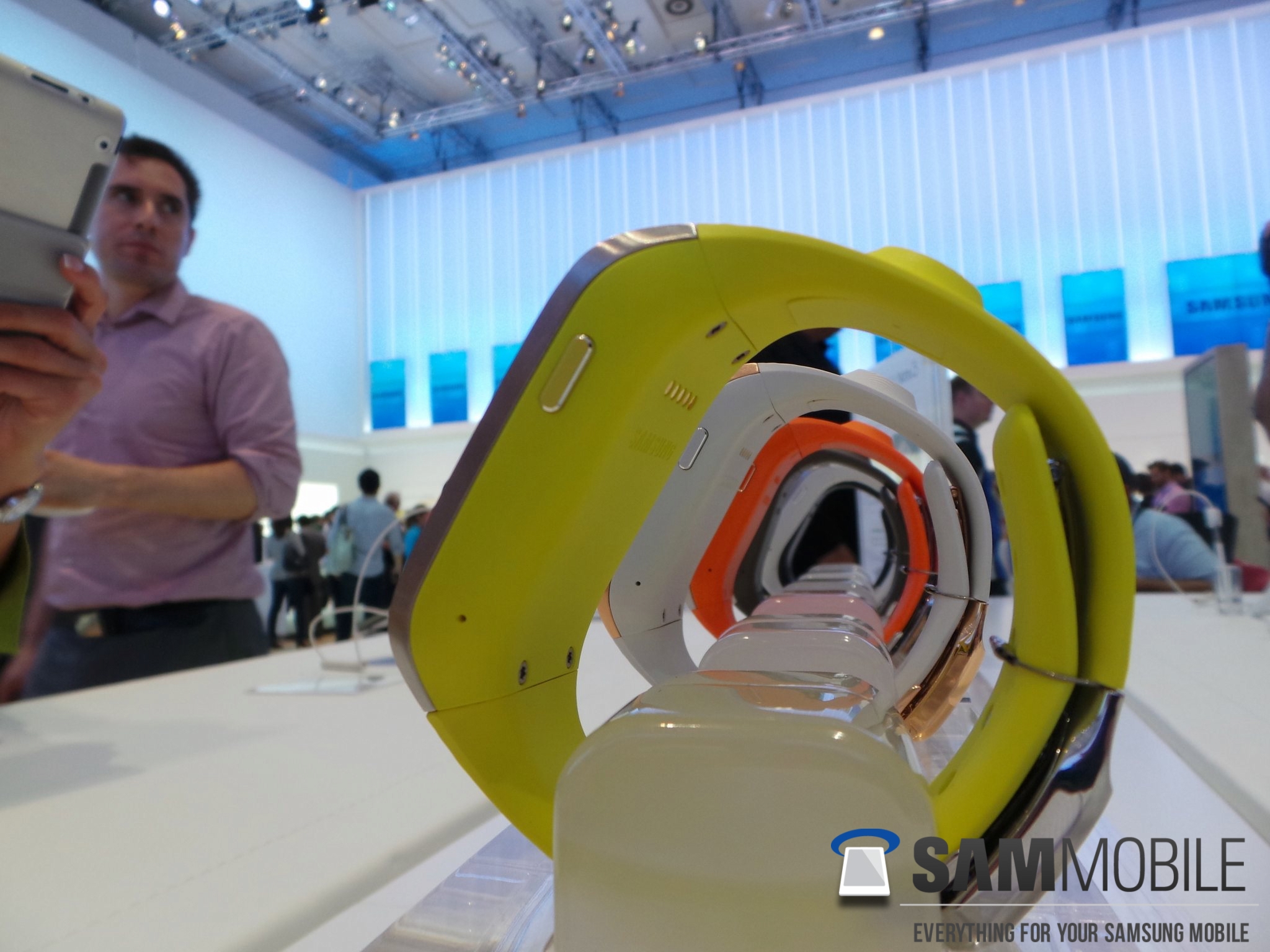 Now, we can say much about Samsung’s first real smartwatch but it is better to test the watch by yourself. We really liked the idea of getting notifications and take some quick pictures, even though the resolution of the camera isn’t so good. Also, design-wise the watch looked great and has a premium feeling, which should keep naysayers happy. Okay, maybe not like the traditional watches like a Rolex but hey, this is a smartwatch! One of our biggest questions is whether someone will use the Gear as a traditional watch or just play around for a few weeks before getting bored, something you should think about before you order one of these beauties for yourself.

We can’t wait to write our full review. One thing is sure – Samsung kickstarted the smartwatch game, and it will be interesting to see what they (and even other manufacturers) come up with in the future.

Samsung surprised everyone at the event by announcing the Galaxy Note 10.1 2014 Edition, a device that never showed up in any leaks or rumors. We played with this tablet and liked it quite a bit. The specifications are awesome. Samsung added a 10.1-inch WQXGA (2560×1600) Super Clear LCD with a pixel density of 299 PPI. 3GB of RAM, 8 megapixel back camera, 2 megapixel front camera and of course the same functions as the Galaxy Note 3 S Pen on it. 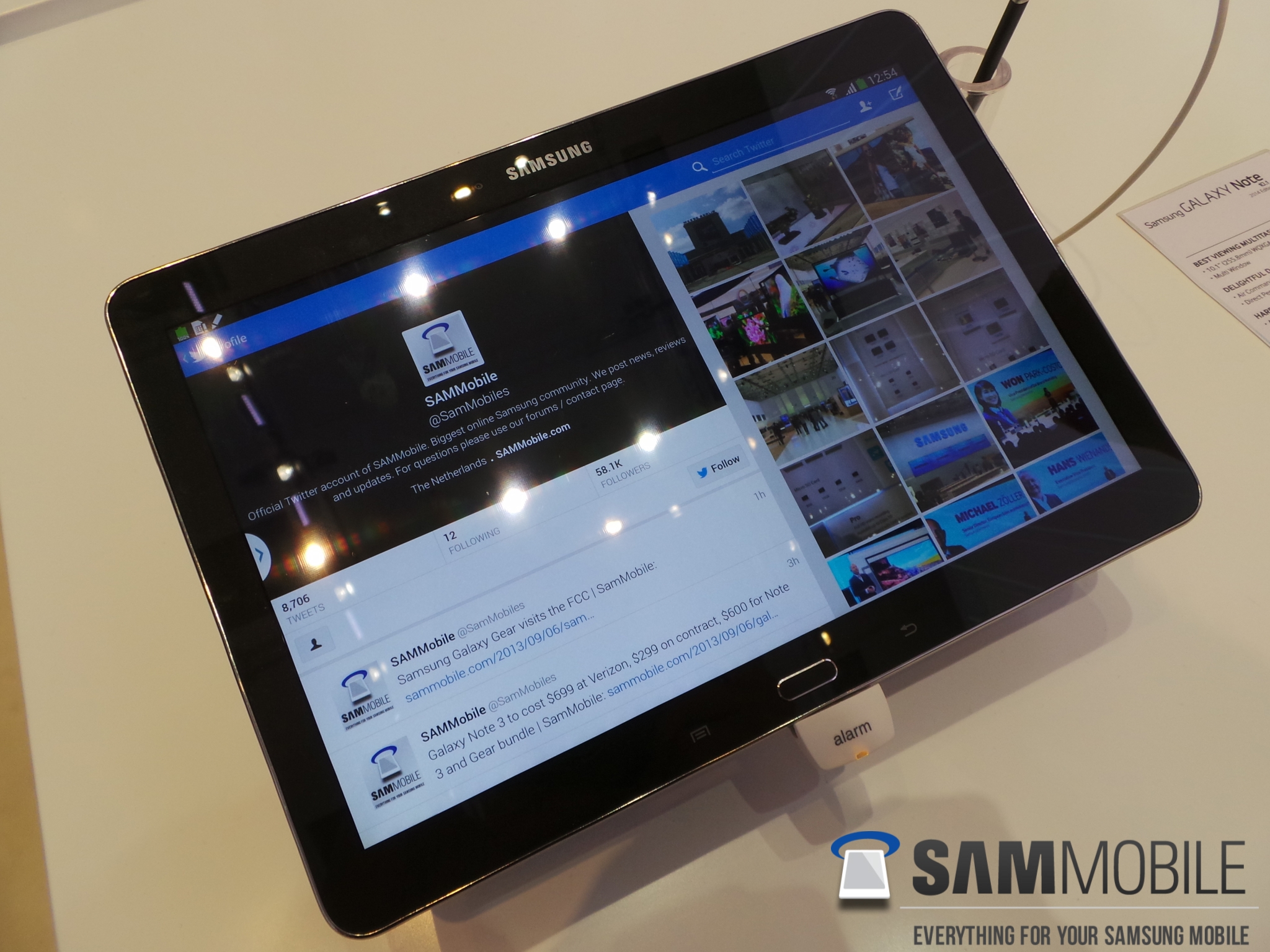 The tablet itself is a lot better than the first generation Galaxy Note 10.1 tablet. It really is a high-range tablet with a perfect format. We can’t wait to make our full review of this tablet which probably will be around November. Samsung probably wont sell too many 10.1″ tablets as customer focus is more on the 7-inchers, which might be a problem for Samsung because the specifications of the upgraded Galaxy Note 10.1 are perfect.