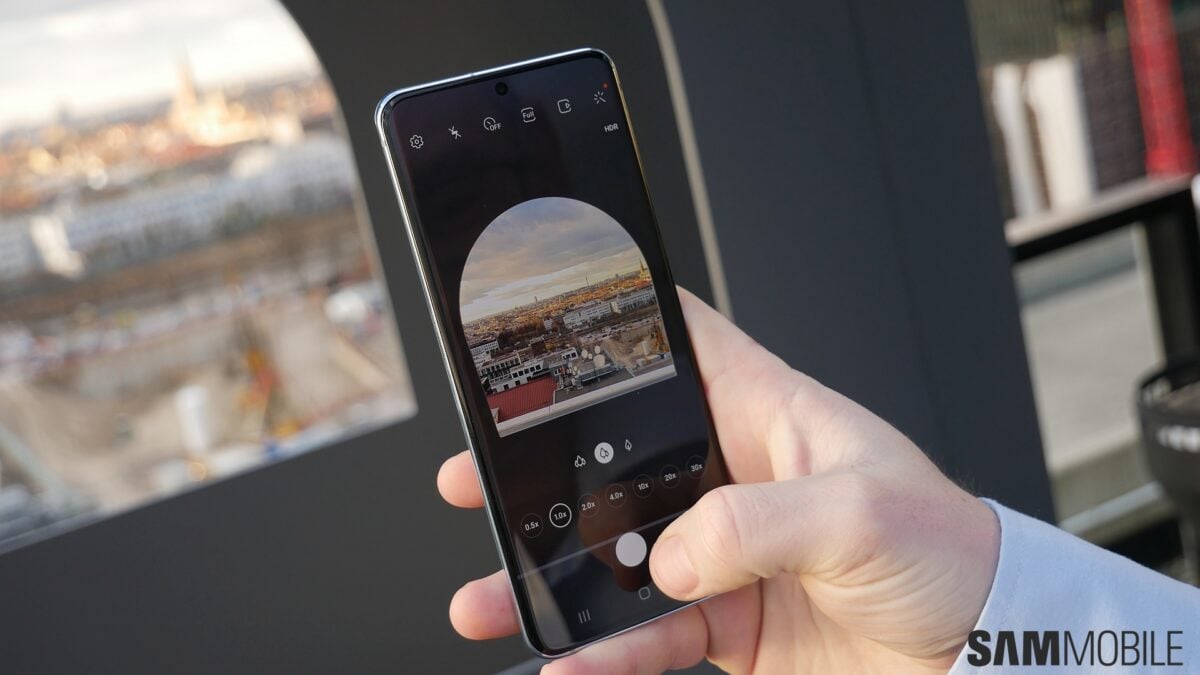 It’s not often that one model in a new flagship series from Samsung stands so far apart from the rest that it really becomes necessary to talk about it separately. But that’s absolutely the case with the Galaxy S20 Ultra. Samsung has thrown everything but the kitchen sink at this device and it really is a strong statement from the company that it means business.

So let’s dive right into this Galaxy S20 Ultra hands-on review and see what kind of a first impression Samsung’s most expensive and most feature-packed flagship ever leaves. For our hands-on review of the Galaxy S20 and S20+, check out this article. 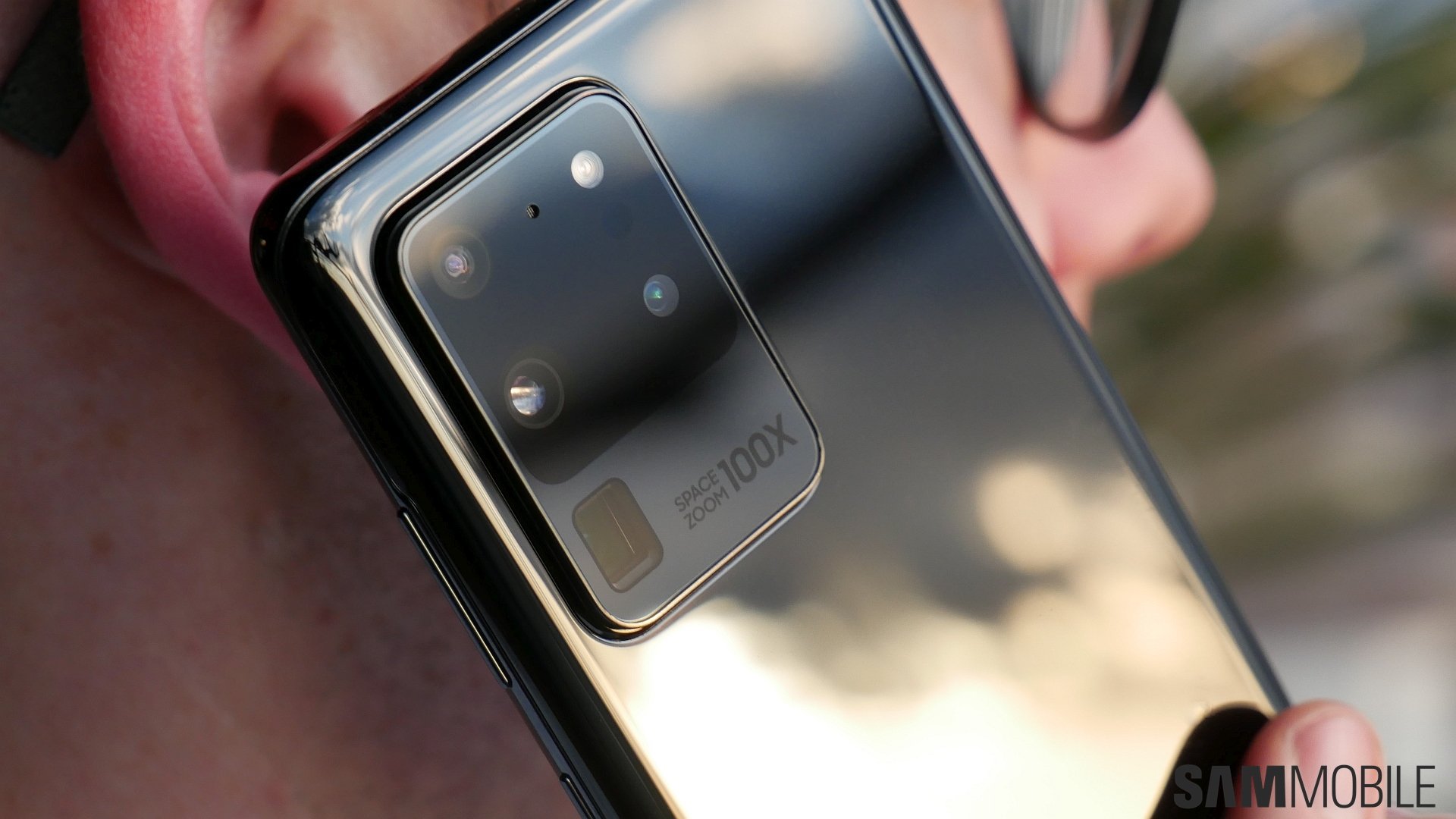 You can pick the Galaxy S20 Ultra out of a lineup pretty easily. It has an imposing personality because of its sheer dimensions and larger display; in fact, the largest yet on a Samsung flagship. Yet, it never feels like a smartphone that you couldn’t possibly use as a daily driver. It will fit in your pocket easily, isn’t too heavy and maintains a thin profile despite all of the crazy tech that it’s packing inside.

It has all of the same new design elements as its siblings which we have detailed in our Galaxy S20 and Galaxy S20+ hands-on review. The Ultra does stand out because of its massive rear camera module. It’s vertically aligned and dominates the back. Given that there’s a decent amount of advanced tech inside, the module does noticeably protrude from the back. Yes, we did the wobble test on a flat surface, and it has great wobbling potential, a consequence of that protrusion.

There’s no mistaking the fact that this is a Samsung flagship. It has the very familiar look and feel that we’ve come to expect from the company’s high-end devices. The subtle curves at the back allow for a comfortable grip while the metal and glass build feels premium in the hand. There are absolutely no complaints here. 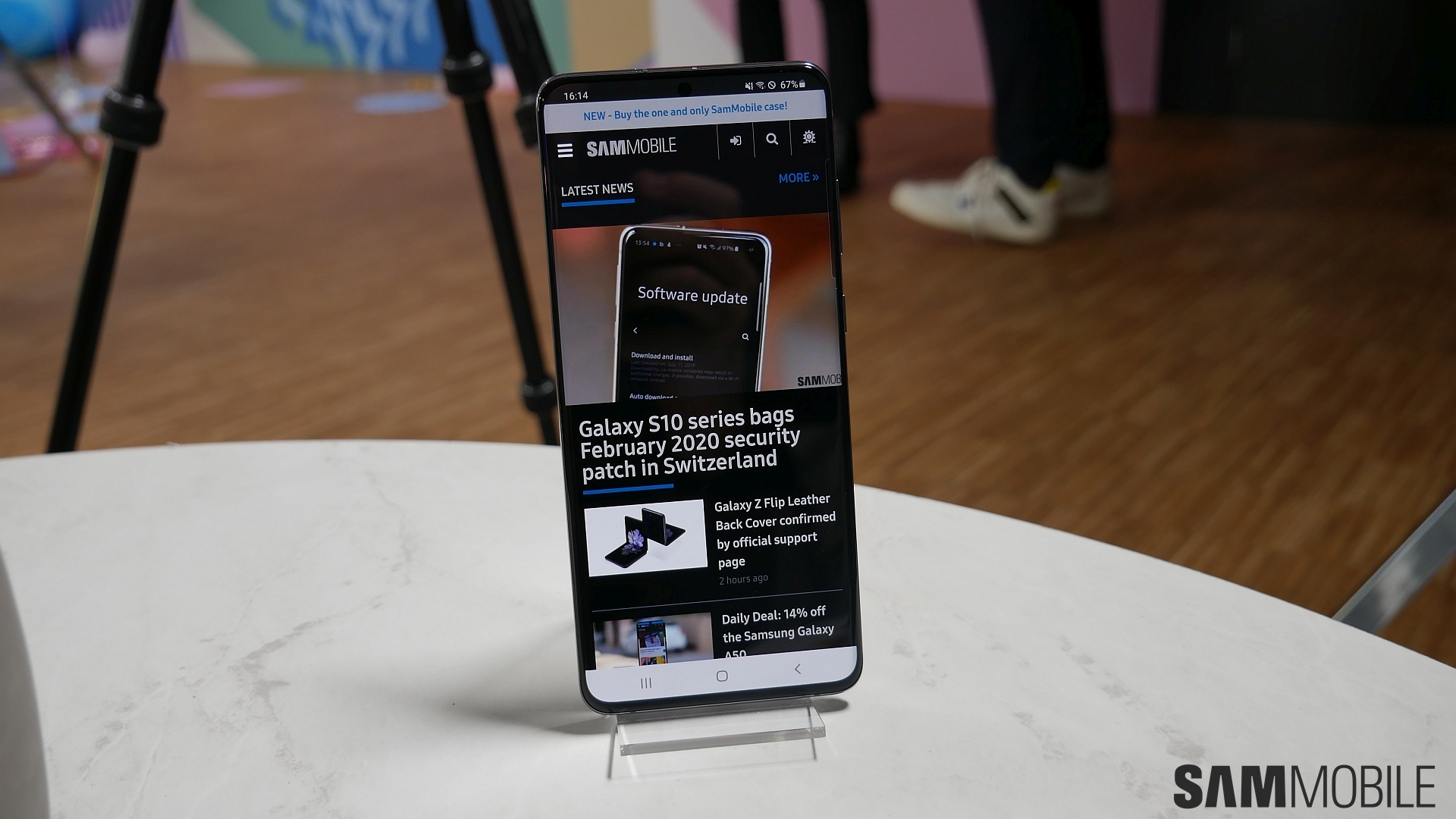 The display size of the Galaxy S20 Ultra is stretching the limits of what could conceivably be called a smartphone and not just a small tablet. The 6.9-inch Quad HD+ AMOLED display is accompanied by slim bezels and subtle curved edges. Given how we use our phones these days with content consumption being our biggest priority, there’s a reasonable chance that most customers who can shell out the extra dollars for the largest model will go for the Ultra partly because of the display, the other amazing tech notwithstanding.

Samsung has equipped the entire Galaxy S20 lineup with a 120Hz refresh rate panel. The fluidity and smoothness that it allows in animations and games is hard to miss. It’s great that Samsung has finally shifted to 120Hz panels for its flagship – it’s a welcome addition to the lineup. The panel’s quality is nothing short of exceptional. Samsung’s AMOLED displays rarely give an opportunity to complain and that doesn’t change with the Ultra.

An ultrasonic fingerprint sensor is present as well. Samsung isn’t saying that a second-generation sensor has been installed but it does say that were will be noticeable improvements in speed and reliability compared to the Galaxy S10. That’s partly because the sensor has been repositioned and additional enhancements have been made. We’ll compare its performance to the Galaxy S10’s sensor in our full review. 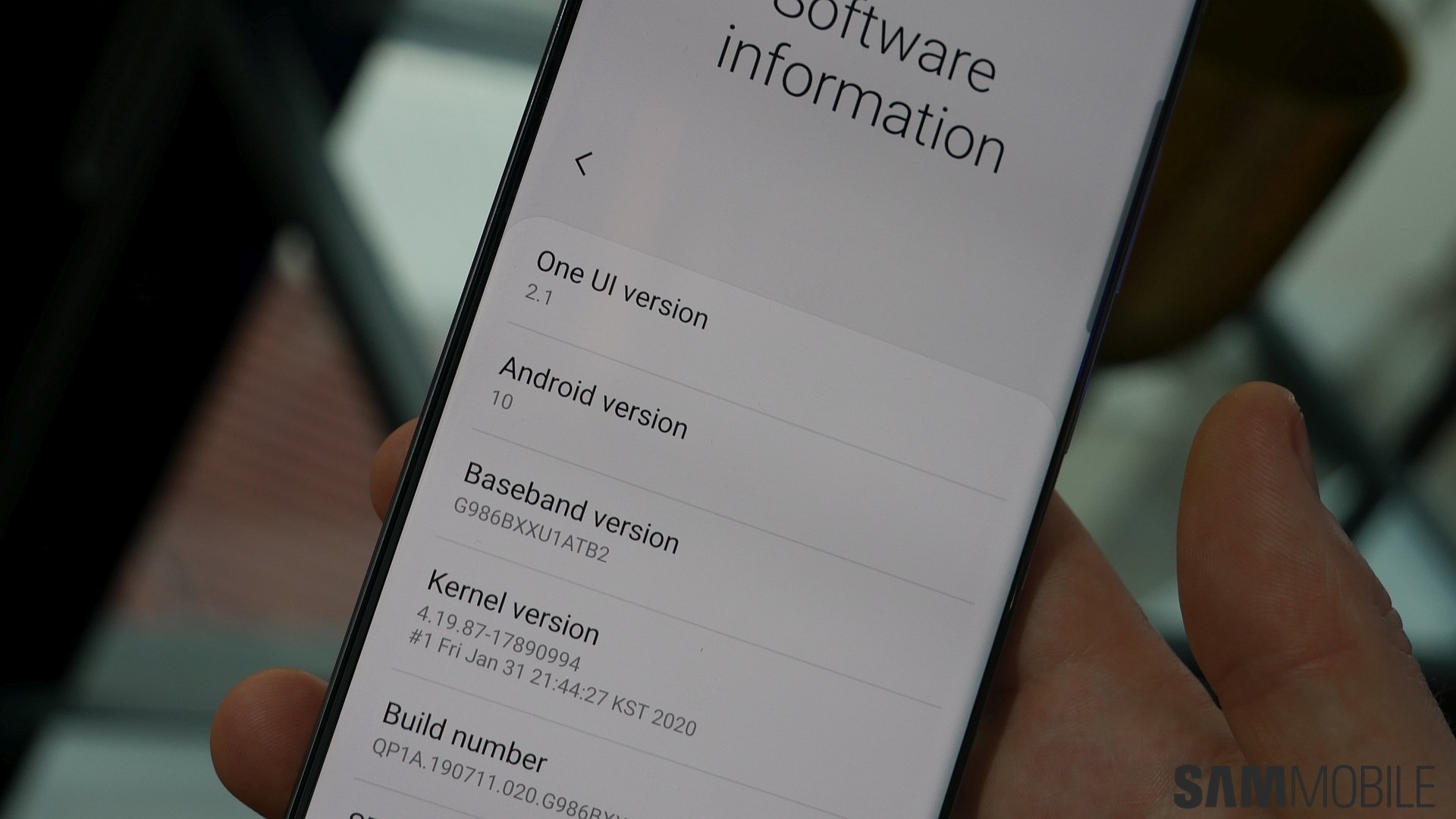 This is a new Galaxy flagship so you already know that it’s coming with the latest version of Google’s Android OS and Samsung’s custom skin. The Galaxy S20 Ultra ships with Android 10 and One UI 2.1, a minor upgrade of Samsung’s UX which brings a handful of new software features to the lineup.

These new features include Single Take, an AI-based camera mode that uses the full variety of cameras on the device to automatically capture different versions of a scene so that you can decide which one you’d keep. There’s native integration with Google Duo for Full HD video calls with up to 8 people and the ability to share 8K videos directly to YouTube. 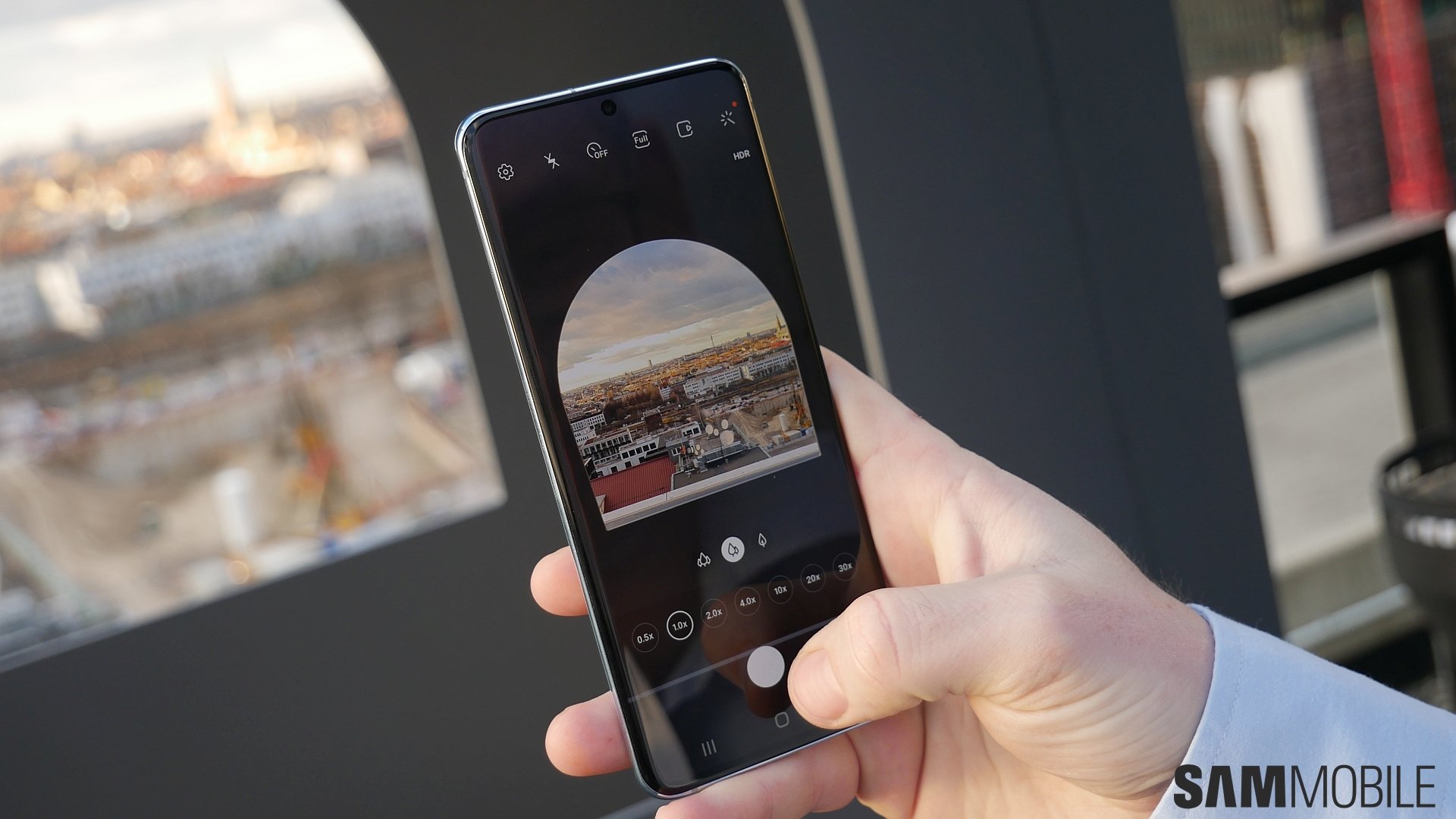 This is what you’re really here for, the camera, the one thing that makes the Galaxy S20 Ultra a certifiable beast. Its quad camera system consists of a 108-megapixel f/1.8 OIS primary sensor with a 12-megapixel f/2.2 ultra wide sensor and 48-megapixel f/3.5 OIS telephoto sensor. There’s a ToF sensor as well for AR experiences.

Samsung won’t exactly say what the optical magnification level of the actual hardware is, but it’s boasting 10x lossless zoom. Lossless zoom by definition means that the image will not suffer from a quality loss when it’s scaled up. It features revolutionary prism tech to allow the handset to achieve such levels of optical magnification. Samsung is putting on-device AI to great use with its cameras. By combining the hybrid optic zoom and digital zoom, the Galaxy S20 Ultra is able to hit 100x Space Zoom. There will obviously be a loss of quality at that level since the device is essentially cropping an image from the 108MP camera to emulate 100x zoom. 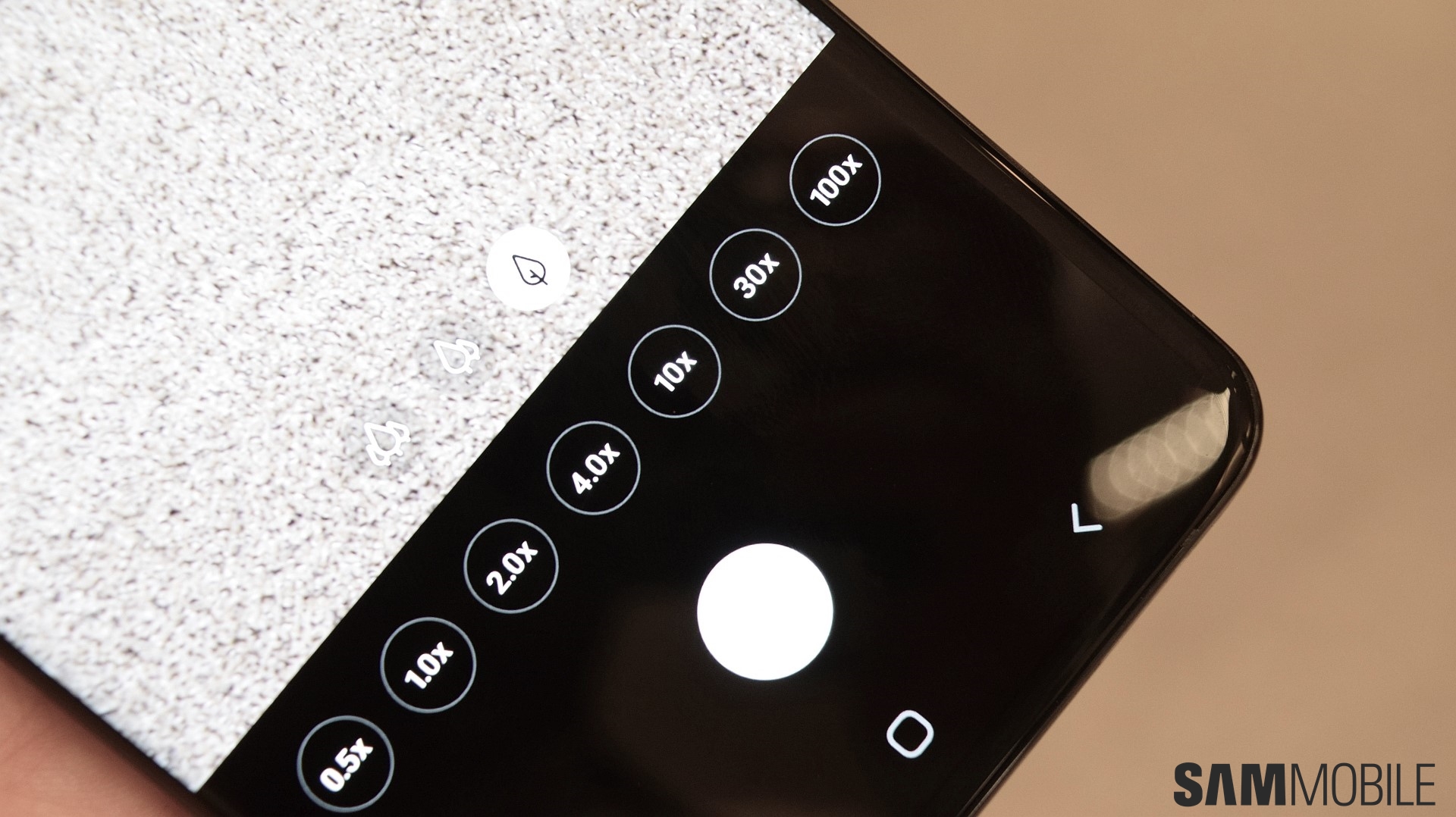 However, having seen some examples of the feature in action, it really does allow for an unprecedented level of optical magnification on a smartphone. Just how useful this will prove to be in daily use is something we’ll test in our full Galaxy S20 Ultra review. It utilizes nona-binning technology to combine nine pixels into one super pixel, which lets more light in and allows for improved quality in low-light conditions. That’s also something we’ll be testing thoroughly in the review. The Ultra is also the only model in the new lineup to feature a 40-megapixel f/2.2 selfie camera.

Samsung is really clear about the customer that it wants to target with the Galaxy S20 Ultra. It’s going after pro photographers, at least the ones who shoot with smartphones and not swear by their full frame cameras. To add to the camera setup’s capabilities, Samsung has developed several new camera features to enable users to do more with their device. There’s a Pro video mode which allows for adjustments to exposure and aperture when capturing videos. A new Single Take mode uses AI to capture multiple varieties of a scene using all of the cameras on the device to provide easily shareable options that include photos and videos. We also liked the crop-zoom feature, which lets you easily achieve the desired crop without considerably altering the image quality. It’s these little common sense features that really go a long way in making our lives easier with the phones we use as our daily driver.

It’s also possible to capture 8K video on the device and even share it to YouTube directly. We played around with all of these new features during our time with the Galaxy S20 Ultra and they seem to be much more useful than some of the features that Samsung has previously built into the camera app just for the sake of announcing something new. Single Take is something that particularly has a lot of potential to be a hot favorite during social gatherings.

The Galaxy S20 Ultra gets the largest battery of the bunch, 5,000mAh to be precise. This is the largest battery yet on a Galaxy S flagship. For those with a light foot, it will easily last them two days, and will comfortably see even the most demanding of users through an entire day.

Samsung does offer 45W super fast charging support on the Galaxy S20 Ultra but there’s some bad news. It’s not shipping the charger with the phone. Much like it did with the Galaxy Note 10+, customers will have to purchase the 45W charger separately if they want to juice up their device at those speeds. All Galaxy S20 models come with a 25W charger in the box.

As far as its specs are concerned, the Galaxy S20 Ultra is in a league of its own right now, thanks to its advanced camera tech and impressive internals. It’s definitely the phone to beat for Android manufacturers in the first half of this year.

Does it work, though, beyond the distinction of being the world’s first 100x zoom phone? There’s no denying the fact that this level of camera tech will come in handy. There are high expectations from the 108MP camera’s low light performance as well and Samsung says that low-light photography is one of the pain points that it has addressed with this device.

The Galaxy S20 Ultra does two things for Samsung. It’s a symbol of Samsung’s technological dominance. The Korean giant has worked very hard to come out from the shadows and establish itself as a leader instead of a follower. If anything could signal to its competitors that it means business in 2020, it’s this, the Galaxy S20 Ultra.

It’s also an ode to Samsung’s fans. Long before the rumors began, our founder Danny wrote an opinion highlighting the fact that Samsung’s next flagship needs to be a true camera powerhouse as the company had seemingly been slipping in this department and would quickly be bested by its rivals. That was always difficult for fans to see. The Galaxy S20 Ultra is something that will make them feel proud. It’s usually these fans who are waiting with wallets in hand for the top-tier flagship from Samsung every year. We’re pretty sure they’re already throwing money at their monitors, and after playing around with it for a few hours, so are we.