The newly released Galaxy Tab S7 and Galaxy Note 20 series consist of some extremely capable digital drawing devices, especially given how the S Pen is just one aspect of their highly versatile feature set. Of course, in order to utilize a high-end digitizer and a long-lasting Bluetooth stylus, you still need apps, and this is where things can get a bit overwhelming as the Play Store and Galaxy Store are both filled to the brim with software of all sorts. A lot of what’s on offer is utter trash, however, because whatever review systems Google and Samsung have in place aren’t doing enough to stop low-quality submissions.

That’s why we’re here today – to provide you with a refined list of apps that will help you create everything from topical doodles to jaw-dropping digital masterpieces, whether you’re using the new Note 20 or Galaxy Tab S7 or an older S Pen-toting Galaxy smartphone or tablet. 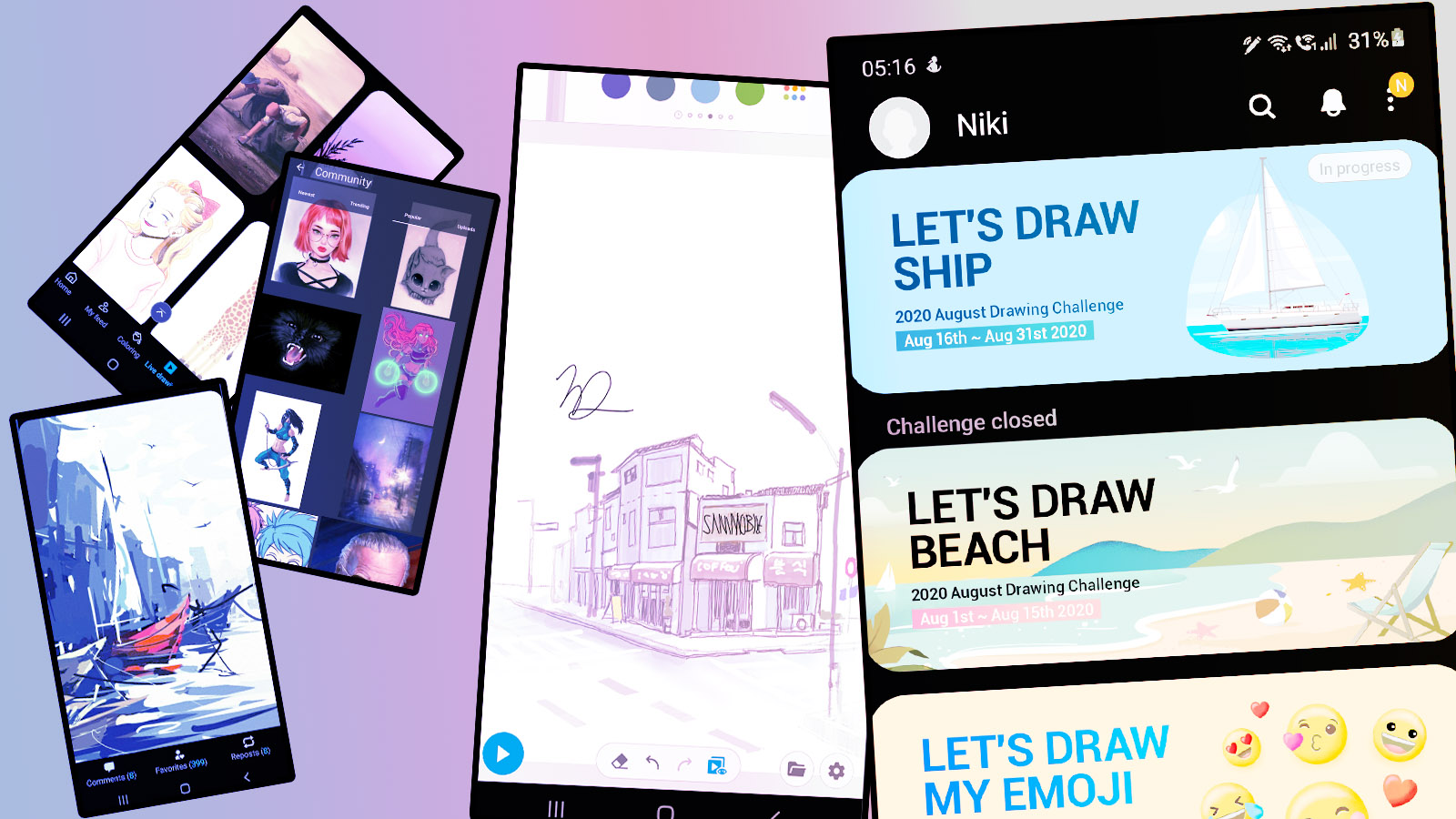 Developed by Samsung itself, PENUP is an Android app devised to introduce you to the world of digital art. Whether you’re a complete beginner or a seasoned artist on the lookout for an online community that will help them grow their skillset, this tool will provide you with a variety of useful features conducive to creating digital art. From drawing tutorials and coloring exercises to sharing and rating pieces, PENUP is a great entry point into the world of mobile creativity. Best of all – it’s completely free to use. 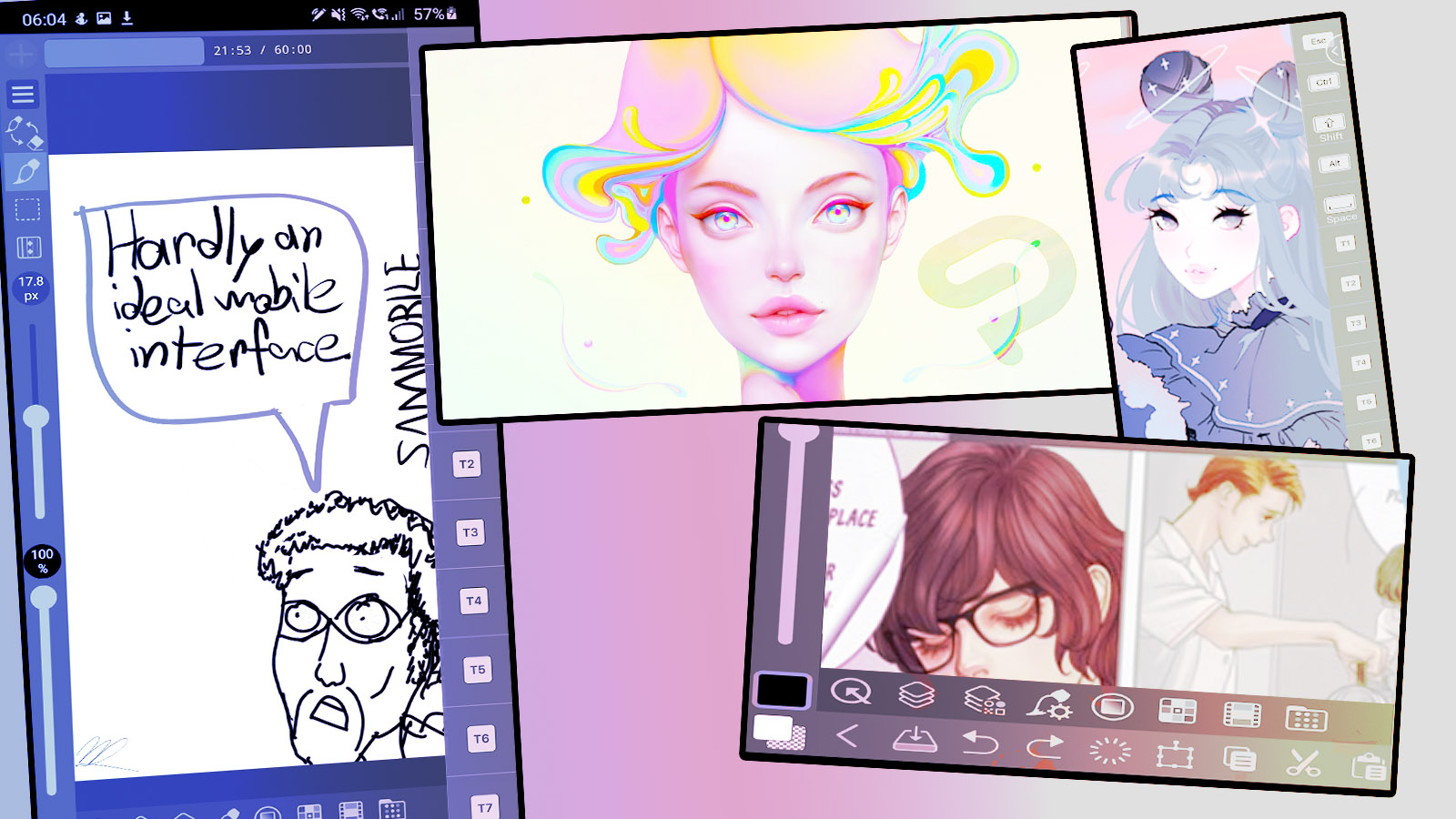 If you have a particular interest in manga, then look no further than Clip Studio Paint, the newest app on this list that debuted alongside the Galaxy Note 20 and Galaxy Tab S7 series as a timed exclusive for Samsung’s latest and greatest mobile devices. Meaning it’s available exclusively from the Galaxy Store for the time being. Its interface leaves something to be desired if you’re used to sleek mobile experiences, but that apparent flaw is also its biggest strength as it allows the app to complement the desktop version of Clip Studio Paint in real time. Alternatively, you can run it in DeX mode while retaining S Pen functionality – even if you already have a mouse and keyboard hooked up to your device. Speaking of drawing accessories, the app even ships with complete support for Wacom tablets.

Finally, Clip Studio Paint is also a capable animation tool that comes with a massive resource database of assets and advice to help elevate your anime skills, regardless of their current level. As a Galaxy device owner, you’re entitled to six months of completely free use, after which the base app will be available for a one-time fee, whereas the premium Clip Studio Paint EX service will set you back $8.99 per month. 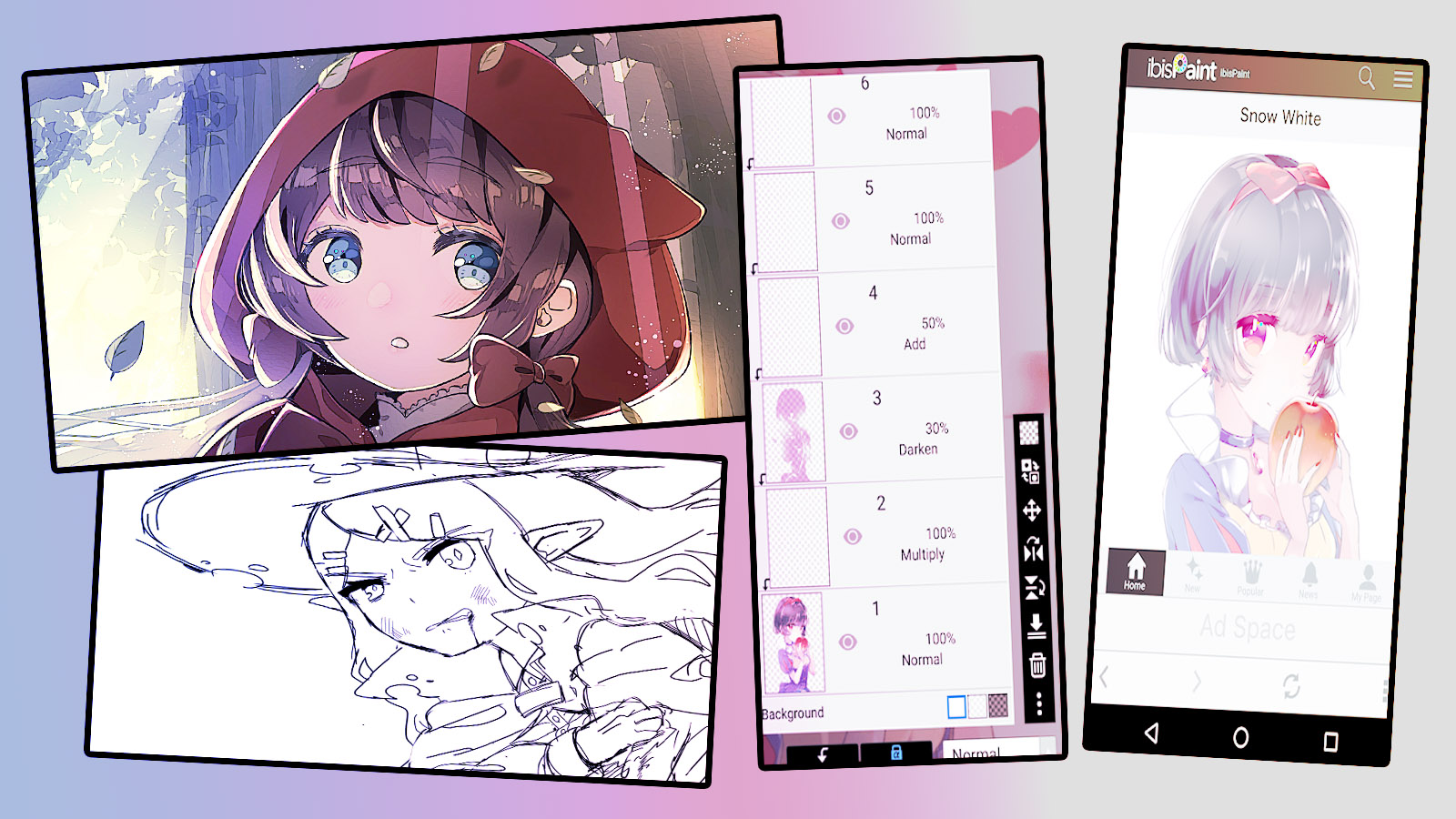 As perhaps the most versatile app on this list, ibis Paint X casts a pretty wide net, catering to everyone from doodlers to seasoned digital artists. Its promotional materials appear to focus on manga artists, but the actual tools it offers are better-suited to a more generalized workflow and aren’t nearly as specialized as those of Clip Studio Paint. So, if you’re still finding your voice as an artist, this is a great mobile creation tool that won’t make you feel chained to any particular visual style, all the while allowing you to make complete use of your S Pen. If you end up liking the app so much that you end up exploring its functional limits, then you’ll be surprised by how much there is to discover, especially if you’re willing to pay $7.99 for the full-fledged ibis Paint experience. 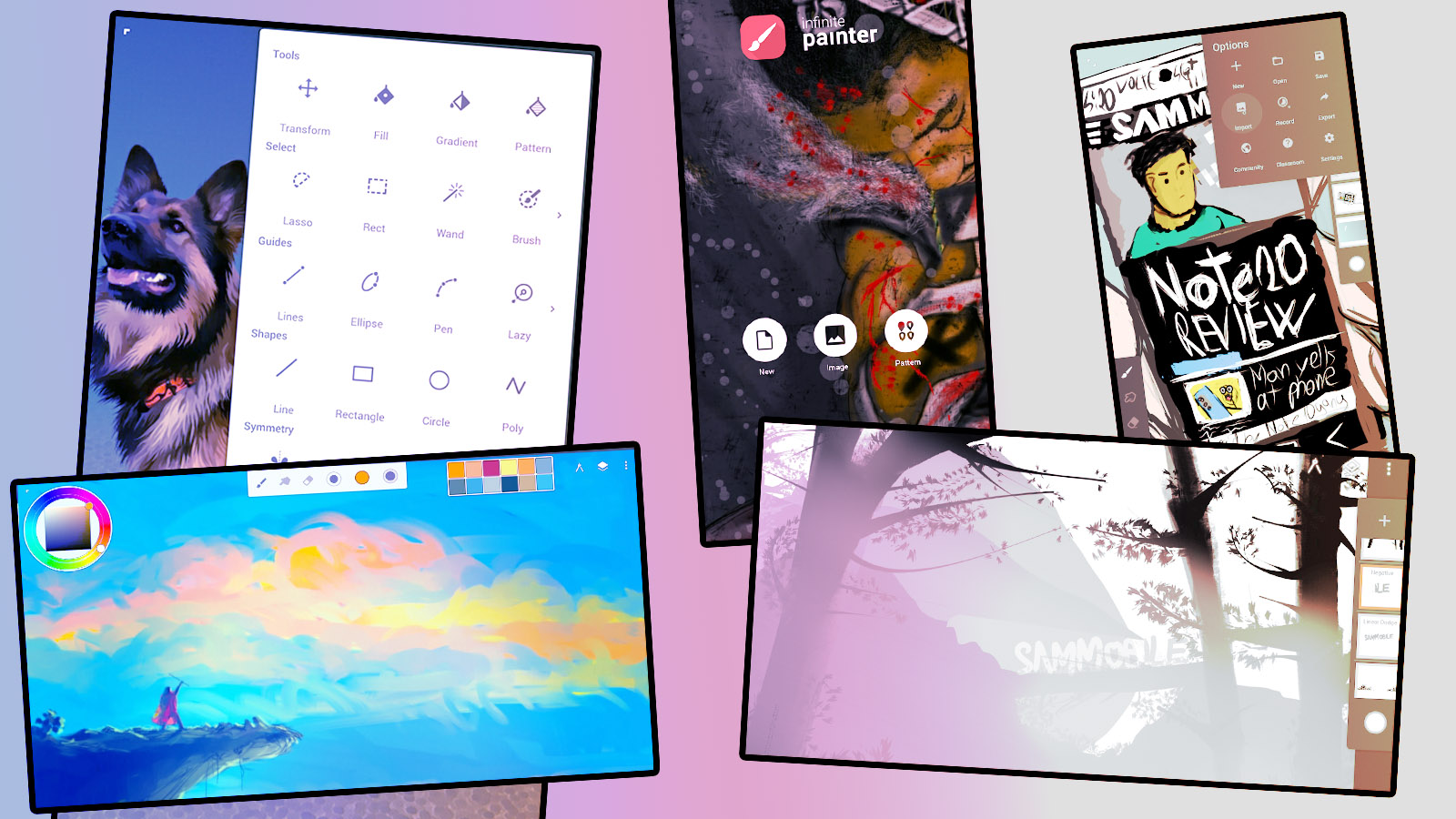 Infinite Painter makes a big deal out of being its own thing, but truth be told, “its thing” is more or less being an Android Procreate clone. But we mean that in the best possible way because as any artist who tried switching from iOS to Android can attest, there are multiple aspects in which Procreate is leagues ahead of the vast majority of apps you can find on the Play/Galaxy store. Its most notable advantage is sleek UI design and seamless timelapse creation, so if intuitiveness is your main concern, then this particular S Pen app is something you really shouldn’t miss out on. Its free version is pretty feature-packed as it is, but if you want to unlock the entirety of its features, you can do so for under $8, meaning Infinite Painter is even cheaper and more accessible than Procreate. 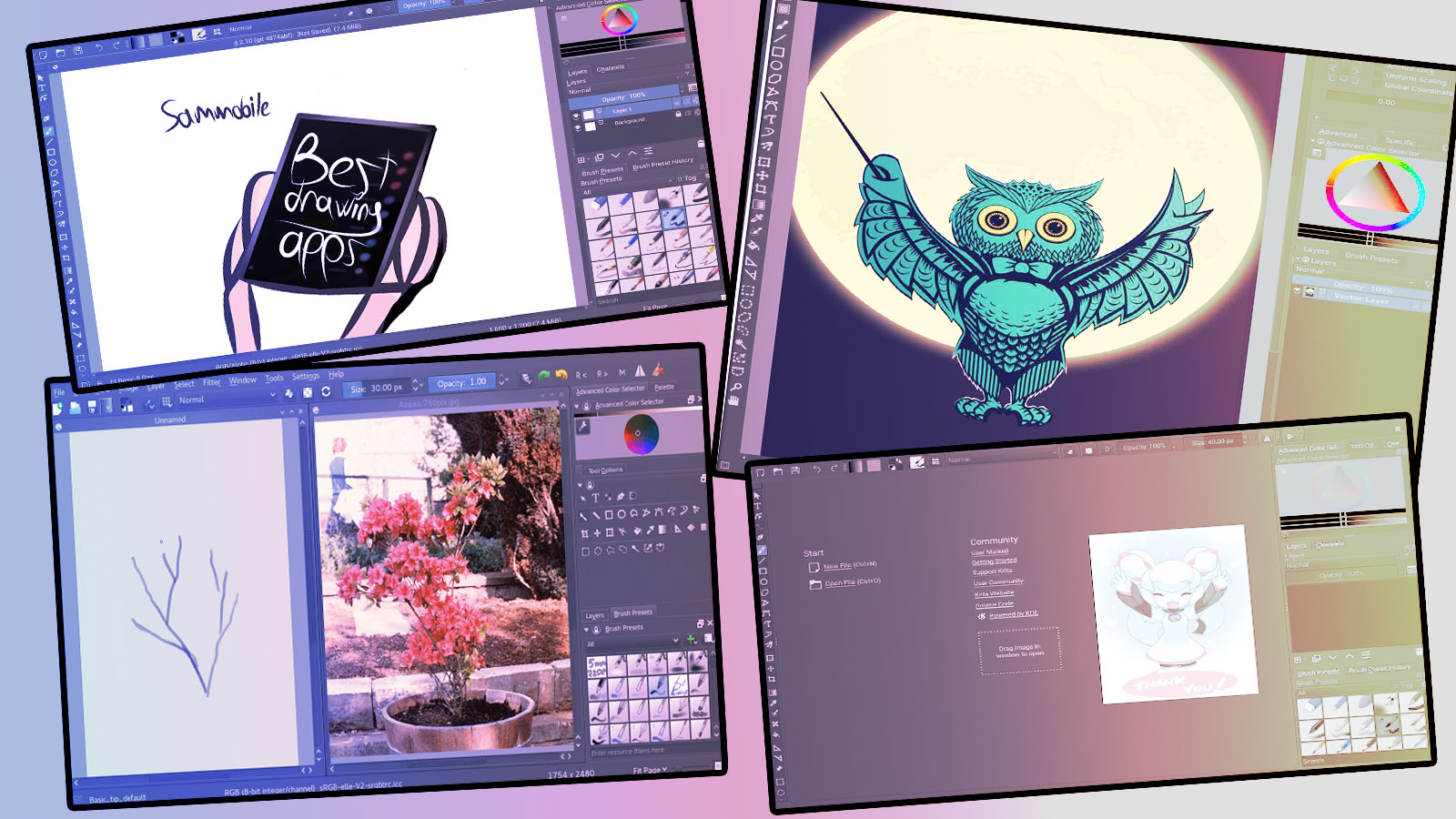 Krita is the only Galaxy app on this list that’s primarily aimed at tablet users. The open-source nature of the original software coupled with the MacGyver-like circumstances in which it ended up being ported to Android  mean you’ll need a pretty powerful device with a lot of screen real estate to really make the best use of it. Meaning this recommendation is only aimed at owners of the last few generations of the Galaxy Tab S series tablets. With that said, even this Early Access version of Krita is well worth a shot due to its powerful combination of image-editing and drawing capabilities, not to mention its legitimate claim to having the best-in-class brush engine. Especially if your art workflow tends to involve a lot of Photoshop-powered manipulation, in addition to traditional drawing. 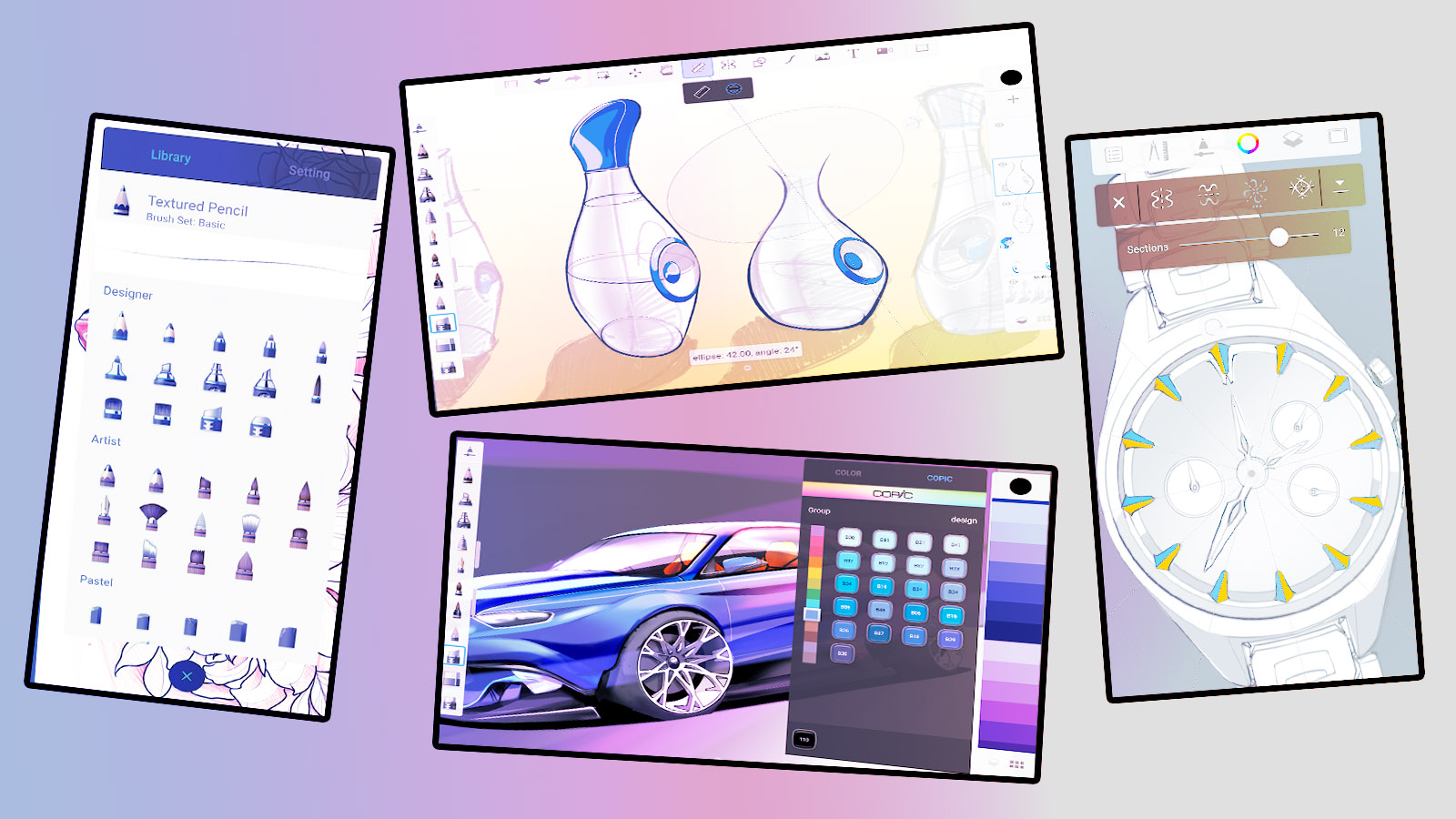 Autodesk SketchBook is hands-down the best value for money you can possibly hope to find among all S Pen-ready drawing apps out there. “What money,” you may ask? Precisely: Free as of mid-2018 and with a decade-long track record to boot, this is an absolutely marvelous app that will turn your Galaxy device into a versatile portable machine for creating everything from highly stylized art pieces to perfectly accurate designs and everything in between.

If you’re ever ready to graduate from an S Pen and a mobile display to a more professional setup involving a desktop computer and a Wacom tablet, for example, you’ll be able to do so at no extra cost as well. It’s only once you want to leverage Autodesk SketchBook in a professional environment that you’ll be asked to pay a symbolic enterprise licensing fee amounting to about $7 per month ($85 a year) for multiple users. 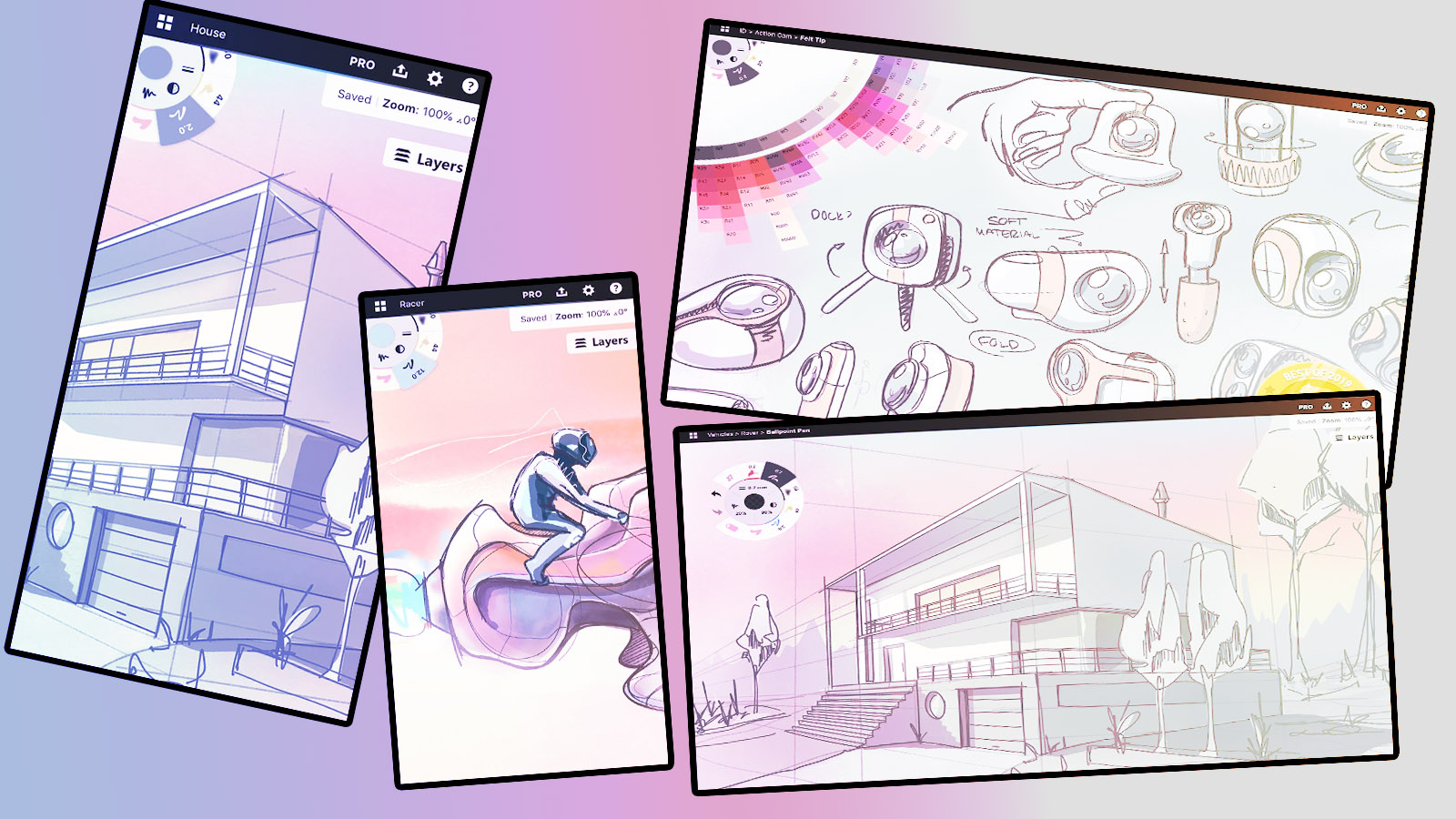 Concepts is the ultimate Galaxy app for creating vector art that offers S Pen support and a wide array of functionalities meant to help optimize your creations for further processing beyond the scope of Android. Its free version is pretty powerful on its own and should have you covered for a good long while, whereas developer TopHatch also pioneered a pay-as-you-go business model that allows users to only invest in functionalities they care about. Alternatively, you can simply unlock all of the app’s existing and future features by subscribing to Concepts Everything for $4.99 per month. A pretty great deal if there ever was one, especially when you look at how limited most competing vector drawing apps on the Play Store and Galaxy Store truly are.

In conclusion, some may find it blasphemous that a list such as this one doesn’t include a single Adobe app and truthfully, we kind of expected to feature at least a couple of them when we set out to create these recommendations. Yet the highly fragmented nature of Adobe’s Android portfolio proved to be an insurmountable barrier for any single one of its tools to deserve a mention above our ultimate picks. Of course, we had to assume the majority of Galaxy device owners who’d be reading this list aren’t already paying for a Creative Cloud subscription. If you are, then by all means, give Adobe’s apps a try before investing in any other tool(s) with overlapping capabilities; just keep in mind that there are arguably superior solutions for any particular workflow waiting for you.