Samsung has been the biggest smartphone brand in the world for almost a decade now, but the company is passing through turbulent times. Its position is being fiercely challenged by Chinese OEMs like Huawei and Xiaomi. In China and India, the South Korean firm’s sales have dropped quarter after quarter. Samsung is still going strong in a few markets like the US and Western Europe, though.

According to a report from market research firm Canalys, Samsung was the biggest smartphone brand in Western Europe during the first quarter of 2020. The company had a market share of 37 percent in the region, finishing above Apple, Huawei, Xiaomi, and HMD Global. However, that was still a 21 percent drop compared to Q1 2019 numbers. It was revealed that the Galaxy A51 was the third best-selling smartphone in the world.

Apple, Huawei, Xiaomi, and HMD Global managed to capture 24 percent, 18 percent, 10 percent, and 2 percent shares of the market, respectively. While sales of most other OEMs dropped during Q1 2020, Xiaomi showcased a staggering 79 percent rise in its market share compared to Q1 2019. Moreover, in a few markets like Spain, Xiaomi managed to beat Samsung to become the biggest brand. This could be a sign that Samsung needs to do better.

Sales of the Galaxy S20 series has been disappointing so far, to say the least. Since the record-breaking sales (80 million) of the Galaxy S4 in 2013, sales of the Galaxy S series have been dropping with each passing year. There’s light at the end of the tunnel, though. Despite its $1,380 price tag, the Galaxy Z Flip has been a bigger hit than Samsung anticipated, and the company plans to launch more foldable phones in the future. 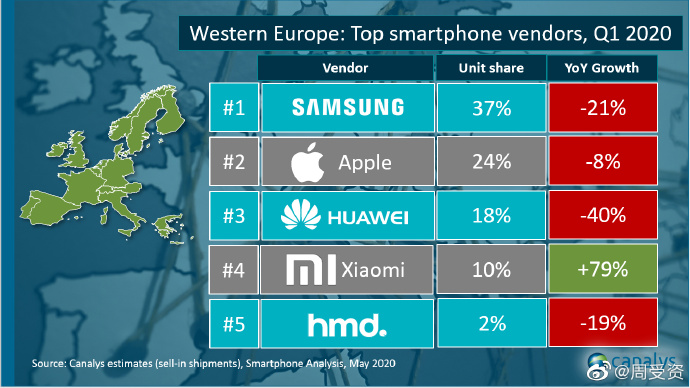