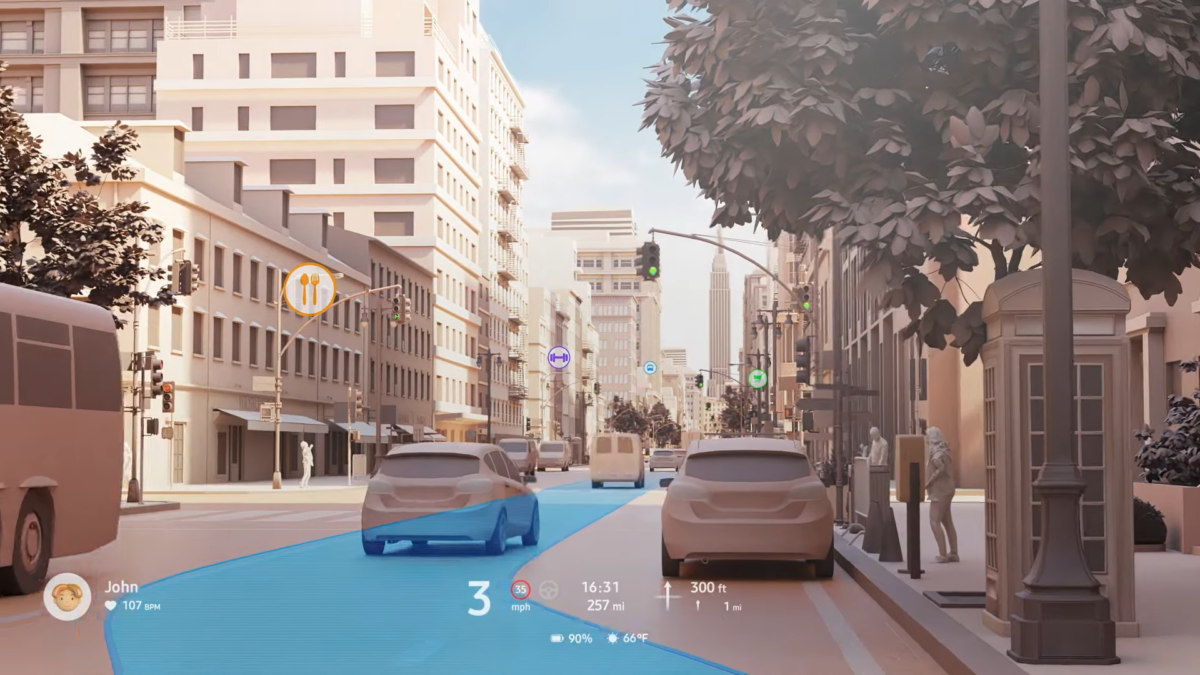 Samsung has become one of the car industry’s main component suppliers. Even though the company doesn’t build its own electric / self-driving vehicles, Samsung supplies major carmakers like Tesla, Rivian, and others with various technologies, ranging from batteries to cameras and lighting systems. The company is strengthening its position in the car market, and this week at CES 2022, Samsung unveiled its vision for the future of in-vehicle experiences in a simulated demonstration.

The concept is the result of a combination of Samsung’s latest tech innovations and HARMAN’s expertise in the automotive sector. It showcases a system wherein cameras and sensors analyze a vehicle’s surroundings to then display relevant AR (augmented reality) info within the driver’s field of view.

You could say that Samsung’s vision of the future of in-vehicle experiences is a souped-up heads-up display based on augmented reality technologies, connected to an array of advanced sensors for environmental mapping, object recognition, and so on.

Samsung’s tech demo looks somewhat familiar to anyone that has used a modern HUD in a car equipped with self-driving technologies. Drivers get a 3D navigation arrow and other bits of information about their vehicle right in their field of view.

Similar, though not as impressive HUD graphics exist, but as useful as modern HUDs are, Samsung’s AR system goes much further and explores what could be achieved using augmented reality. Things like vehicle-to-everything communications, See-Through technology, and more.

At one point in the video below, Samsung demonstrates how “See-Through” technology could allow a driver who may be driving behind a truck to see what’s in front. And in poor visibility conditions, the system can scan for and render the outline of wild animals that might be crossing the road in front of the car.

Unlike standard HUD systems, Samsung’s AR technology is almost limitless, within the confines of augmented reality, of course. It’s all a tech demo at this point, but even so, it offers a glimpse of where the self-driving vehicle industry could be going next.

At the Consumer Electronics Show 2022 back in January, Samsung unveiled the Odyssey Neo G8. This is the world’s first 4K monitor that has a whopping 240Hz refresh rate. As you’d expect, a lot of gamers are waiting for this product to go on sale. As with most products unveiled at CES, the pricing and […]

We’re going live for our first show of 2022. Let’s discuss the best of CES

SamMobile is about to live stream for the first time in 2022, so we’re inviting you to come and join us as we discuss the latest happenings in the world of Samsung and the latest products unveiled at CES 2022. It’s certainly been a busy start of the year, primarily because of how early the […]

At CES 2022, Samsung has released its oddly-named ‘837X’ virtual world in the blockchain-powered Decentraland metaverse. ‘Samsung 837X’ is described as a ‘fully immersive experience’ that offers visitors quests, NFTs, and access to live music events, as well as previews from Samsung’s CES 2022 keynote. Anyone with access to the Chrome internet browser on a […]

It’s been a busy week at CES 2022, with Samsung unveiling the Galaxy S21 FE and new foldable and rollable display technologies wrapped up in unique form factors. We’re on the CES show floor, and we had an opportunity to take a close-up look at and test many upcoming Samsung products, from a new portable […]

Samsung has been making various eco-friendly and sustainability efforts over the past few years. The company made several changes to its material procurement, production mechanism, and packaging of its products. At CES 2022, the company announced its sustainability efforts with 2022 home appliances. Reducing microplastics from entering the environment The South Korean firm has partnered […]