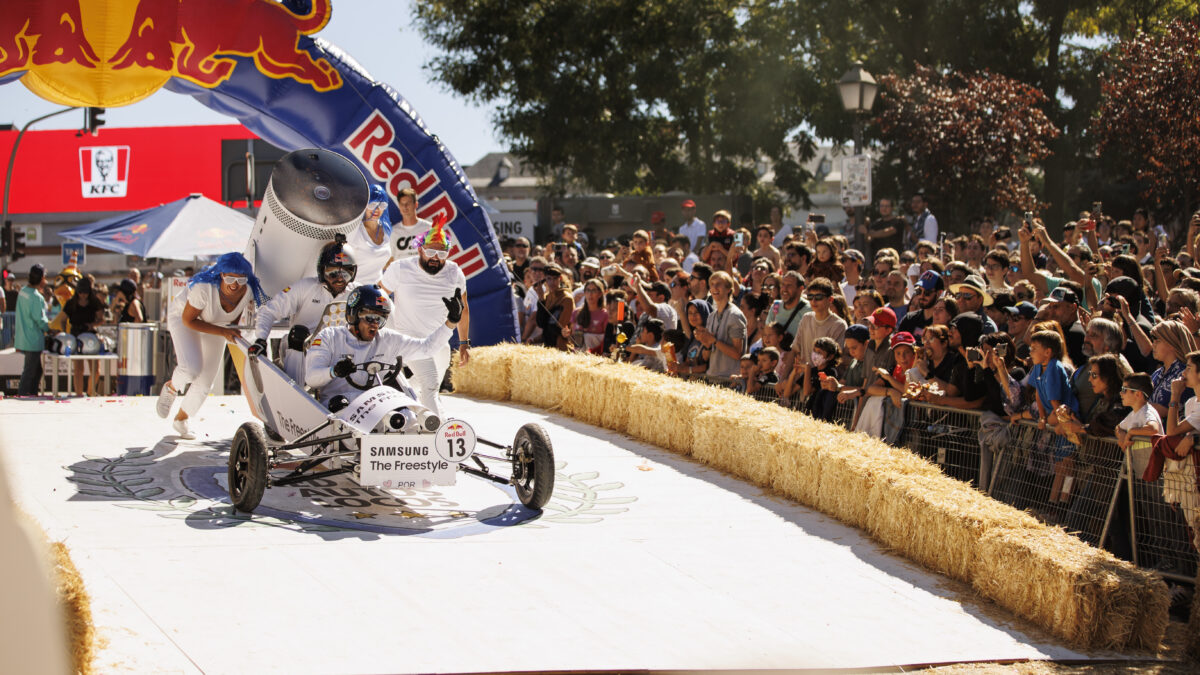 Samsung and Red Bull have crossed paths again, and if you’re familiar with the old Galaxy S9 Red Bull Edition, you might be thinking that the two companies have joined forces to release another Red Bull-branded smartphone for 2022. But that is not the case. Instead, Samsung has joined Red Bull in its backyard, i.e., the race track. The Korean tech giant recently participated in the famous Red Bull Soapbox Race with its own vehicle inspired by The Freestyle projector.

In case you’re unfamiliar with the concept, the Red Bull Soapbox Race is a challenge organized by Red Bull at least once every year. Here, amateur pilots participate in races and compete with other rivals and the environment itself using hand-crafted motorless vehicles. It’s a fun event that fuels hilarious moments and the imagination of participants who create unique vehicles to win races and the hearts of spectators alike.

Make way for The Freestyle on the race track

Samsung entered Red Bull’s Soapbox challenge in Spain with a three-wheel vehicle inspired by its portable Freestyle projector. The vehicle’s headlights are represented by two Freestyle projectors (which have probably seen better days), and at the back, the motorless kart carries a large Freestyle inflatable.

Aside from participating in the Soapbox Race, Samsung also acted as a sponsor for the latest Red Bull event held in Madrid, Spain. The company gave away The Freestyle as a free prize to the racers achieving the best result of the day.

Javier Martínez, Marketing Director at Samsung Electronics Iberia, said: “We share with Red Bull a passion for offering consumers fun and surprising experiences that make them enjoy themselves to the fullest.” Check out the video below if you want to watch Samsung’s run on the race track.

Hands-on with Samsung The Freestyle 2023 projector at CES 2023

The original Freestyle projector Samsung unveiled a year ago at CES was one of the show’s highlights. Samsung unveiled a refreshed model at CES 2023, and once again, its compact and portable form factor has remained one of its best features. Here’s our hands-on experience with The Freestyle 2023 projector. You may have noticed that […]

Samsung announces 2023 version of The Freestyle projector at CES 2023

Samsung launched The Freestyle projector at CES 2022. Its portable circular design, the ability to project on tables, walls, and ceilings, and the Tizen OS made it very popular among the masses. Critics, on the other hand, believed that Samsung wasn’t offering much for the price that they were asking for this portable projector. Well, […]