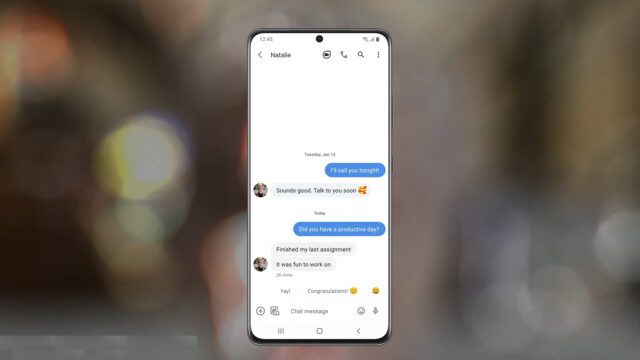 Despite being a feature-rich messaging app, Samsung Messages is no longer the default SMS app for many newly-released Galaxy smartphones (running One UI 3.1 or newer out of the box). Instead, these devices come with Google Messages as their default SMS client. The app is now finally getting a useful feature that isn’t available on Samsung Messages yet.

The folks over at 9t05Google have discovered that the latest beta version of Google Messages can properly display iMessage reactions when conversing with iPhone users. It shows the respective emojis towards the corner of the message, similar to how it appears on the Messages app on an iPhone. Earlier, these reactions would appear in the form of a text message saying “Liked [Your Message]” or “Laughed at [Your Message].”

Since Apple’s iMessages are nothing but SMS messages with additional information, Google Message is able to finally translate that extra information into proper emojis. So, once you get this feature on your Samsung smartphone sometime in the future, you can chat with your friends who have an iPhone without the chat thread containing additional texts for iMessage reactions.

This feature was leaked a few days ago, and Google has now started rolling it out to some beta users. Have you received this update yet? Let us know in the comments section below.