The Galaxy Fold is just a few months old but the work that went into the first-gen device goes way back. Samsung has been exploring both the foldable and dual-screen concepts for many years now, and interestingly enough, one of the company’s older patents for a dual-screen phone was granted by the U.S. Patent and Trademark Office last month. Should Samsung decide to pursue this concept further, it could end up competing with Microsoft for this untested market segment in 2020.

The patent originally discovered by Patently Mobile describes ‘Dual display smartphones reflecting new user interfaces and modes of operation.‘ The sketches detail a device that shares the same form factor as the Microsoft Surface Duo, where two equally-sized displays are connected through a hinge.

The Galaxy Fold is going to face direct opposition from the Huawei Mate X, but it’s interesting to see how other OEMs are now trying to achieve the foldable smartphone concept without using expensive flexible display technology. Instead, companies like LG and Microsoft are developing foldable phones based on two conventional, non-flexible panels connected through a hinge.

In other words, whether it’s going to be through foldable screen technology or the dual-screen concept, 2020 might be the year in which the mobile market will be revitalized by new smartphone designs. Samsung is reportedly working on the second-generation Fold(s), and the company isn’t alone in developing this new category of devices powered by flexible screens. But there is a chance that the dual-screen concept will take off and enjoy some popularity, at least until flexible display tech matures and becomes easier to obtain.

Should this happen, Samsung is technically prepared to take on the challenge, at least as far as the U.S. Patent and Trademark Office is concerned. The patent recently secured by Samsung gives it green light to pursue the dual-screen foldable concept. Of course, patent designs don’t always become real products, so only time will tell if this will indeed come to pass. 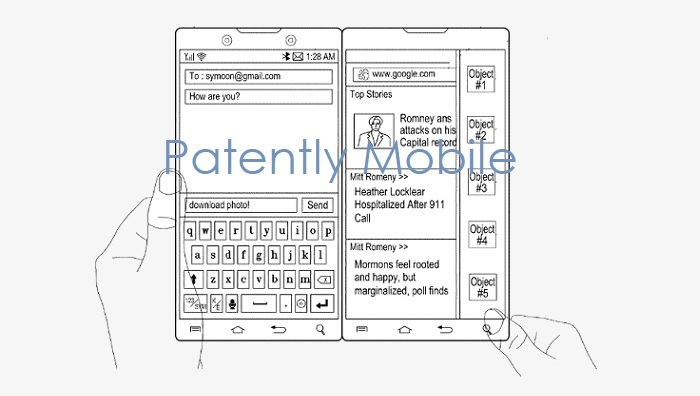 Do you think it would be a good idea for Samsung to develop a dual-screen device in parallel with the Galaxy Fold as a way to compete with Microsoft’s or LG’s interpretation of a foldable phone? Or should the company focus solely on improving its flexible display technology to try and get as big of a head start as possible? Or maybe both? Join us in the comment section below.