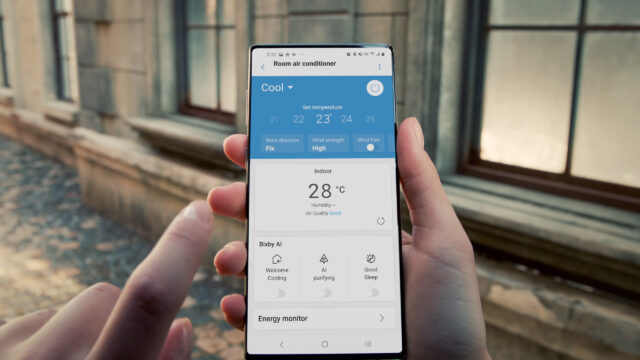 An unnanounced full-screen smartphone from Samsung had a cameo in a recent ad for the company’s new Wind-Free Air Conditioner series. While the mysterious device was shown running SmartThings, the app’s white interface revealed no display notch or punch-hole to speak of. The main takeaway here is the implied use of under-display camera (UDC) technology, a solution Samsung reportedly been working on for a while now.

The AC ad unsurprisingly prompted some speculation about the look of the upcoming Galaxy Note 20, especially after a similar-looking device render appeared on Samsung’s own website. Be that as it may, don’t take this to mean this is exactly how the next Galaxy flagship — or any other device from Samsung, for that matter — will look like.

While the futuristic smartphone shown in the below ad (starting at 0:55) is more likely to be a prop than a product that’s about to hit the market, the timing of its appearance coincides with some past expert forecasts regarding the arrival of such gadgets. For example, a report from late 2019 predicted Samsung’s first full-screen smartphone to arrive in the summer of 2020. Insiders from South Korea specifically mentioned the Galaxy Fold 2 as part of that prediction, expecting the foldable to become Samsung’s first device to utilize under-display camera tech.

Needless to say, there’s probably no way the unnamed smartphone depicted herein resembles anything close to the Galaxy Fold 2. However, both the Galaxy Note 20 and the successor to the Galaxy Fold are confirmed to launch this summer, perhaps even simultaneously. This bezel-free handset cameo hence at the very least underlines how close Samsung is to finally figuring out UDC tech, which should usher in the era of truly full-screen smartphones.