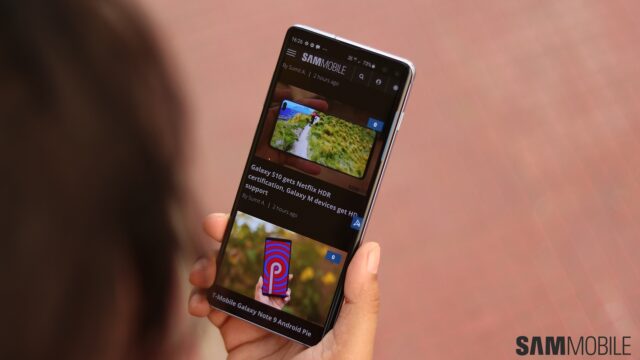 Samsung’s main aim is to create a full-screen smartphone, wherein the camera and all the required front-facing sensors, including the earpiece speaker, are mounted beneath the screen — without a notch, hole-punch or any other sort of cut-out in sight, according to a report from Yonhap News.

“Punching a hole in the OLED display is a very challenging technology,” Yang Byung-duk, Vice President of Samsung’s Mobile Communication R&D Group Display, said in a briefing. “We tried the technology for Galaxy’s 10th anniversary model and think the strategy worked as a result.”

Yang then went on to reveal that the Infinity-O Display on the Galaxy S10 is somewhat of a milestone for screen innovation, but the real objective is to create a full-screen experience, adding that Samsung is considering implementing its own version of Crystal Sound to make that a reality.

That’s a rather straightforward name for a complex bit of kit, which sends audio waves racing through the screen — eliminating the need for a front-facing speaker. We know for a fact that Samsung’s been mulling over the idea for a while, but rival LG beat it to the punch with the LG G8 ThinQ.

“Though it wouldn’t be possible to make (a full-screen smartphone) in the next 1-2 years, the technology can move forward to the point where the camera hole will be invisible, while not affecting the camera’s function in any way,” Yang said, leaving us very excited for what the future holds.