Samsung is finally bringing the Galaxy A01 to Brazil, releasing this week

It’s been a long time coming, but the Galaxy A01 has finally been announced for Brazil, four months after the phone’s original unveiling. It will be available for purchase by the end of the week, but it is not listed on the company’s online store as of this writing. Once it pops up, prospective buyers will be looking at a price of 1,099 Brazilian Real ($210), which is quite a premium over the usual ~$120 asking price in other regions.

Despite the high price relative to other markets, the Galaxy A01 is undeniably a budget solution. It’s powered by the Snapdragon 439 chipset, as revealed by Samsung Vietnam a couple of months back, and the SoC is paired with 2GB of RAM. The device has 32GB of internal storage expandable by up to 1TB and relies on a 3,000mAh battery.

The Galaxy A01 has a 5.7-inch TFT display that follows Samsung’s Infinity-V design language. The V-shaped notch accommodates a 5MP camera with an f/2.2 aperture, while the rear-facing main camera setup comprises a 13MP main shooter paired with a 2MP depth sensor.

The phone lacks a fingerprint sensor, but on the bright side, it does have a 3.5mm headphone jack – a feature that has been phased out on almost all of Samsung’s smartphones (and it’s not the only OEM to do so). But for a budget device, the inclusion of a 3.5mm connector is very fitting, as a pair of Galaxy Buds+ in Brazil costs nearly as much as the smartphone itself (999 Real / $191).

Samsung Brazil is releasing the Galaxy A01 in black, blue, and red. 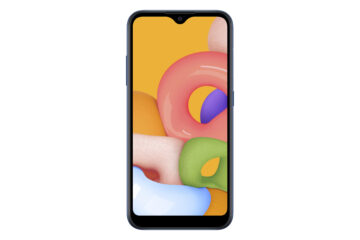 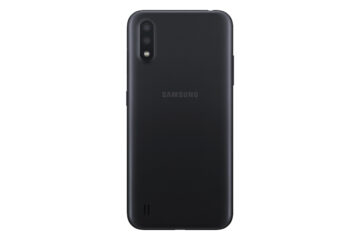 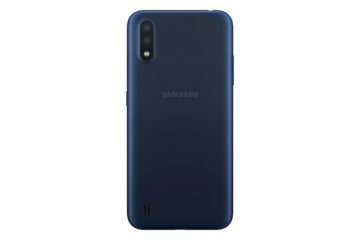 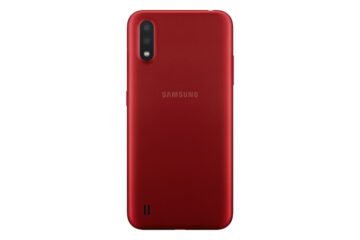