Samsung Electronics lost a couple of places on Forbes’ ranking for the World’s Largest Tech Companies in 2022 and came out in 4th place, down from the 2nd place in 2021.

Samsung Electronics was led by three companies based in the United States, namely Apple, Alphabet (Google’s parent company), and Microsoft. (via BusinessKorea).

The Korean tech giant recorded $244.2 billion in sales and was estimated to have a market value of $367 billion. Nevertheless, market values for the top-three leading companies on Forbes’ list are in the trillions of dollars.

Apple remained the largest tech company in the world, according to Forbes. For the 2022 ranking, Apple recorded sales worth $378.7 billion and topped a staggering market value of $2.6 trillion.

Back to Samsung, it’s worth noting that the company ranked 4th in 2020 and 2nd in 2021. Now it’s back in the 4th position, but the balance could always swing back in its favor, if history is any indication. Next year, Samsung could once again climb up the ladder and catch a spot on the podium. 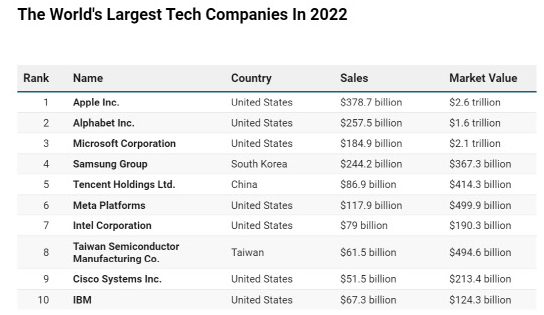