We may have just gotten our first look at a Galaxy S21 performance benchmark, or more specifically the Galaxy S21 powered by the upcoming Exynos 1000 chipset. A device bearing model number SM-G996B was spotted in Geekbench 5 today, and unless the benchmark entry is fake – which is always a possibility – this should be none other than the Galaxy S21 featuring Samsung’s in-house chipset solution.

The device is described as having an exynos2100 motherboard and has the following unique identifier: ARM implementer 65 architecture 8 variant 1 part 3396 revision 0. The AP has a total of 8 cores but the benchmark entry doesn’t reveal exactly how these cores will operate. However, according to a recent rumor, the so-called Exynos 1000 has a 1 + 3 + 4 core configuration, meaning it relies on one main core, three performance cores, and four energy-efficient cores.

The chipset appears to have a base frequency of 2.21GHz and it’s paired with 8GB of RAM, but of course, these are preliminary details and the Galaxy S21 will likely have additional RAM variants.

The benchmark also reveals that the Galaxy S21 runs Android 11 but this is to be expected. More importantly, the listing suggests that the Exynos 1000 chipset delivers similar performance to the Snapdragon 865+. The Galaxy S21 yielded 1,038 points in the single-core test and 3,060 points in multi-core. In contrast, the Galaxy Note 20 Ultra 5G (Snapdragon 865+) has a score of around 960/3,050 points in single/multi-core tests, whereas the Exynos 990-powered Galaxy Note 20 achieves around 885/2,580 points.

It’s very important to highlight that the Galaxy S21 is roughly six months away from its expected market debut, and the relatively low benchmark score can be explained by the fact that the phone is still in development. We don’t expect the Galaxy S21 to be thoroughly optimized at this early stage.

There’s also the possibility that the benchmark at hand is fake. It can happen and there’s no way to be certain of its validity. With that being said, we advise you to reserve some skepticism for these early bits of information and the benchmark results below. 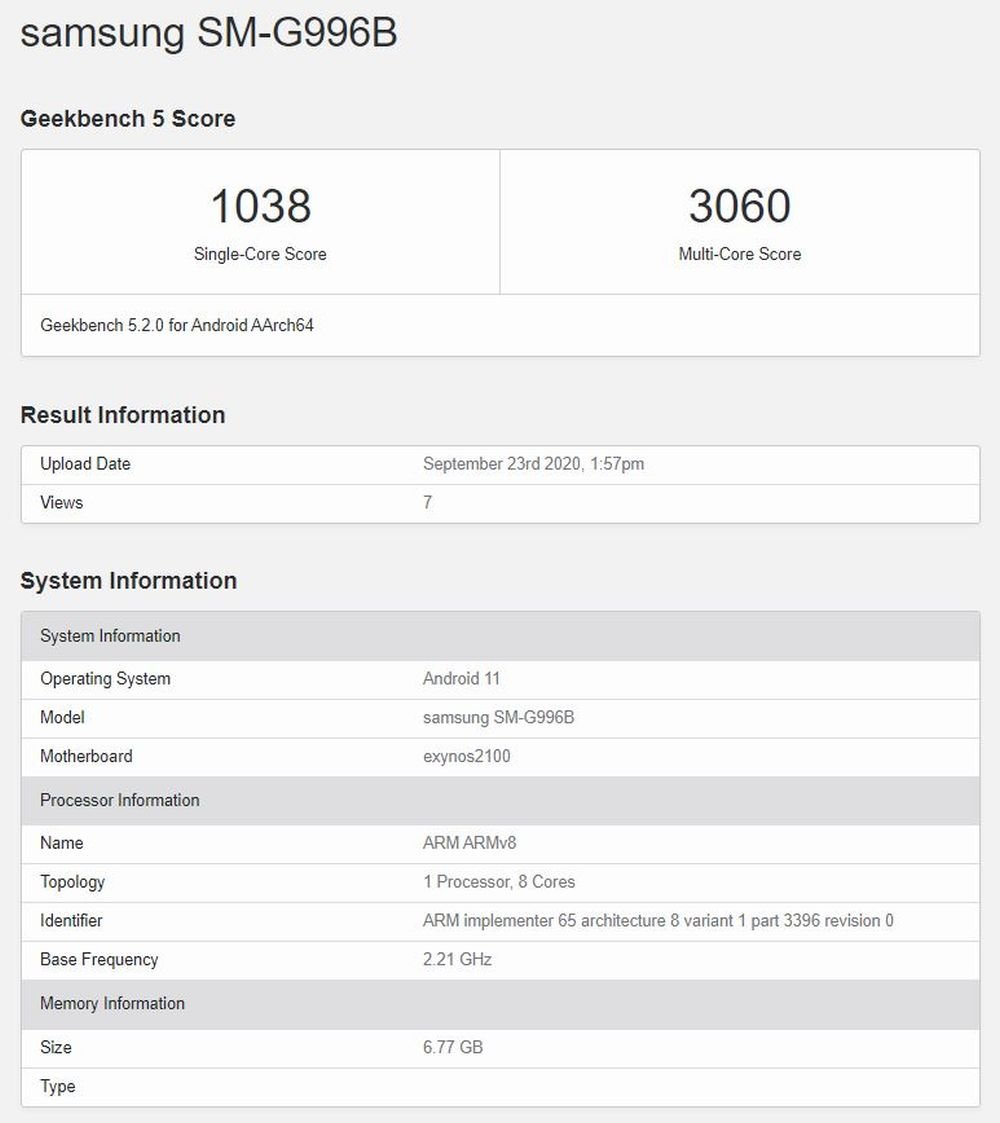