One UI 2.5 update for LTE and 5G Galaxy S20 series is widely available

Samsung’s One UI 2.5 update rollout for the Galaxy S20 lineup started late last week. The initial over-the-air release took place in a handful of European countries but the update is now widely available for the Galaxy S20 series in too many markets to count. Indeed, the update keeps expanding its reach but even if you haven’t received a notification yet, chances are you’ll find the right firmware for your phone and region in our firmware archive.

In case you missed last week’s news, the new firmware update that brings One UI 2.5 to the Galaxy S20 lineup carries firmware version G98xxXXU4BTH5, G98xxXXU4BTH5 and G988BXXU4BTH5 for the Galaxy S20, Galaxy S20+, and Galaxy S20 Ultra, respectively. You can click the links for quick access to the new firmware but keep in mind that it’s rolling out for the LTE as well as 5G versions, so make sure you select the model number corresponding to your phone before downloading the firmware from our archive.

As for what you can expect from One UI 2.5 on the Galaxy S20 lineup, the list of new features includes wireless DeX, the option to change Single Take duration in the Camera app, an enhanced Pro Video mode and more, all of which have been ported over from the latest Galaxy Note 20 flagship. The update also adds support for Bitmoji Stickers on Always On Display, support for Split Keyboard in landscape mode, and of course, it includes the August 2020 security patch. Click the image below for a quick look at the entire changelog. 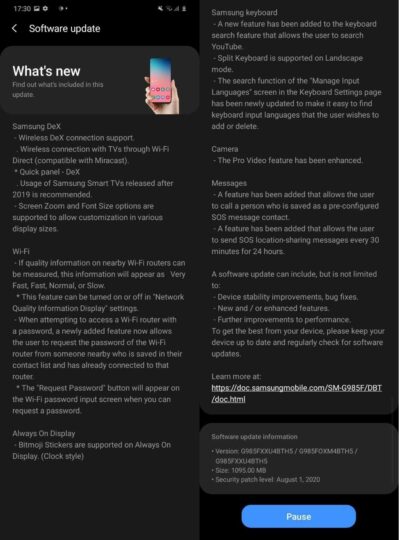