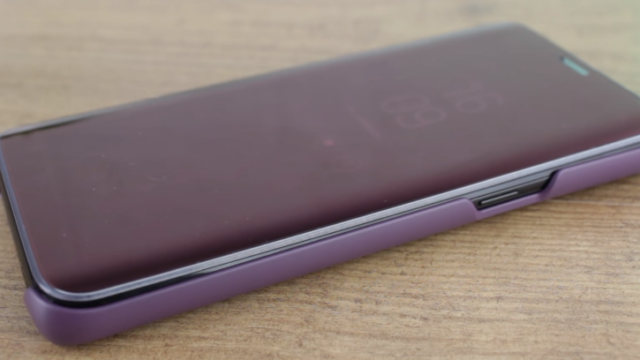 Mobile Fun, one of the popular accessories retailer for smartphones, has gotten hold of the official Clear View cases for the Galaxy S9 and Galaxy S9+ and revealed an interesting tidbit. The retailer has put up a video detailing the cases, and as noted in the video, the Galaxy S8 and S8+ fit almost perfectly in the S9 and S9+ cases, suggesting the dimensions aren’t going to be much different. Leaked renders have suggested the curves on the display will be more subtle, and that might be why there’s a bit of space free on the sides when the S8 and S8+ are inserted in the S9 cases.

These cases also reiterate that the Galaxy S9 will have a single camera at the back, while the Galaxy S9+ will get a dual rear camera, with the fingerprint sensor located below the camera sensor(s) on each device. There’s also a new purple version of the Clear View case, supporting our own information that a purple/violet color option could be launched for Samsung’s upcoming flagship.

With the Galaxy S9 and S9+ set to be unveiled on February 25, it looks like parts, accessories and other items related to the handsets are making their way to different retailers. Earlier this week, replacement battery listings for the two phones had revealed that the battery capacities won’t be changing compared to the S8 and S8+: The S9 will have a 3,000 mAh battery and the S9+ gets a 3,500 mAh battery. As for the Clear View cases, Mobile Fun says these feel as good as before, and the pricing has also be reduced (at least in the UK).

The retailer also has listings for all other official cases, but none of these have images just yet. These include the Alcantara, Hyperknit, LED Flip Wallet, Silicone, and Protective cases. As revealed a couple of months earlier, some of these are new while the others are being carried forward from the S8 and S8+. It remains to be seen if options like the 2Piece case or the Keyboard cover would be announced alongside the other cases, or perhaps at a later date after the phones go on sale.

Check out the hands-on video from Mobile Fun below, and find out what we expect to see from the Galaxy S9 and Galaxy S9+.