Samsung’s latest smartwatch, the Galaxy Watch Active 2, was launched in August last year. It is almost perfect and has all the features that most people want in their smartwatches, including stylish design, calling ability, fitness and sleep tracking, good battery life, and even ECG. However, the ECG feature hasn’t been activated yet, and the rollout might take even longer.

The South Korean firm had promised to roll out the ECG (electrocardiogram) feature on the Galaxy Watch Active 2 in the first quarter of 2020, but that’s not happening anymore. We’ve reached the end of the promised time frame already. The person in charge of Samsung Health Service operations in Samsung Community has now informed that the team needs more time to optimize the ECG feature for stable performance. Samsung will announce a new time frame in the future.

Many Galaxy Watch Active 2 users have been complaining about the lack of ECG on Facebook, Reddit, Samsung Community forum, and Twitter. Consumers say that they bought the Galaxy Watch Active 2 because of the electrocardiogram feature, but they haven’t been able to use it for more than seven months. We hope that the ECG feature is rolled out over the next couple of months.

Despite the lack of ECG, the Galaxy Watch Active 2 is one of the best smartwatches out there, thanks to a bright and clear screen, simple yet beautiful design, activity tracking, health tracking, and sleep tracking. It also features a loudspeaker, microphone, GPS, NFC, Samsung Pay, Wi-Fi, Bluetooth, wireless charging, and battery life of at least two days. Read our in-depth review here. 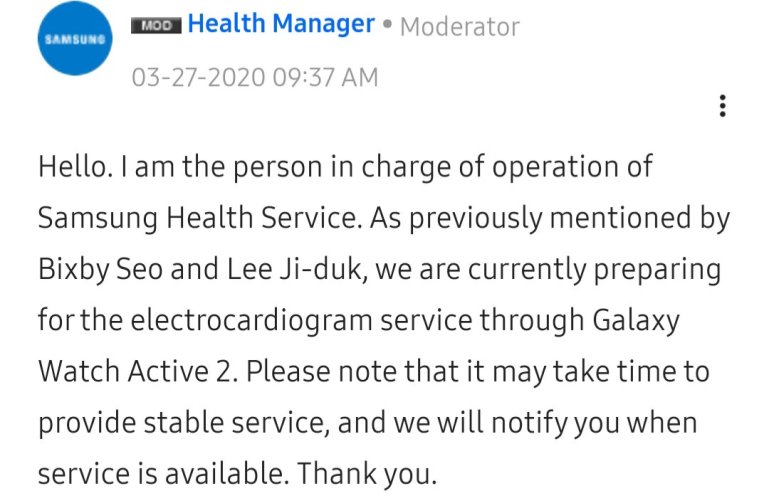