Samsung is now rolling out a new software update for the unlocked Galaxy Fold in the United States. The update bearing firmware version F900U1UEU1ASJ4 follows the update that rolled out in France, the UAE, and other countries for the device last week. As you can tell from the screenshot below, the changelog is not as descriptive but the update launching in the US should include the same features, at least in theory.

You never know with Samsung given how many of its previous US-based releases differed from updates launched elsewhere. Nevertheless, the changelog looks similar and does mention improvements to the Camera and the inclusion of the October 2019 security patch.

The update for the Galaxy Fold in the US weighs around 535MB or roughly 140MB less than the package launched in Europe last week did. Therefore the Galaxy Note 10 camera features like AR Doodle, Night mode for selfies, and/or Live focus video mode may or may have not all been included in the package. The October 2019 security patch, on the other hand, began rolling out on Galaxy devices roughly a month ago. It fixes 17 Samsung Vulnerabilities and Exposure (SVE) items along with other Android OS security issues.

You can grab the latest update for the Galaxy Fold in the US by opening the Settings app on the device, accessing Software update, and tapping Download and install. Feel free to leave a comment below if you’ve received the update stateside and you’ve noticed any other changes or new camera features pulled from the Note 10 series. 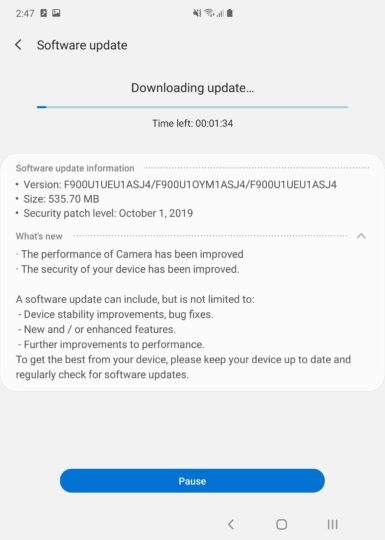