Samsung is far from done with its 2019 Galaxy A launches, but its 2020 Galaxy A lineup has already started doing rounds on the internet. We recently reported about the Galaxy A71 and A91, both of which will be coming to Europe with Android 10 next year. The former has now popped up on the benchmarking website Geekbench, revealing some key details.

An unannounced Samsung smartphone with model number SM-A715F has just been spotted on Geekbench. The listing reveals that the smartphone, which should be the Galaxy A71, will have 8GB of RAM and will come with Android 10 out of the box. The benchmark has also detected a Snapdragon 675 SoC, the same processor that powers the Galaxy A70, as well as its upcoming “s” variant, the Galaxy A70s.

The Galaxy A71 is a smartphone rumored for an early 2020 release. However, if that happens, Samsung could be planning a big overhaul of its software policy. The company may actually launch an A series phone with the latest Android version before the next S flagship, which hasn’t happened yet.

Samsung, however, may do something different: It could launch the A71 with Android 9 Pie in some markets, like India, before the Galaxy S11 arrives. After all, the Indian version of the Galaxy A91 is being tested with Android Pie, and the same could be done with the A71 as well. The European versions could indeed come with Android 10 on board, but only after the Galaxy S11 hits markets in 2020. 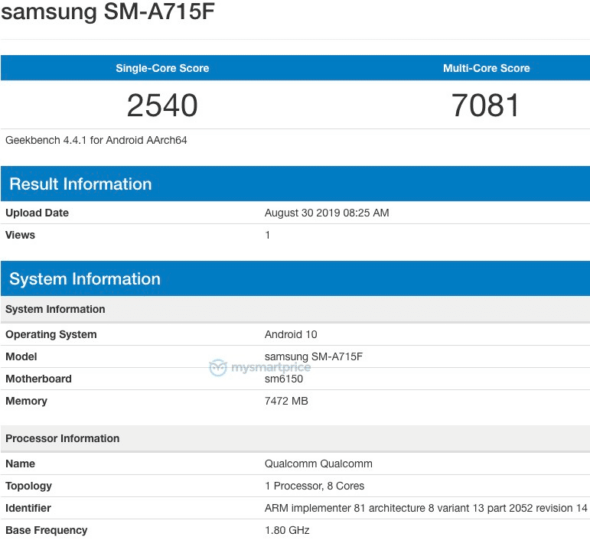