After the LTE and 5G-enabled Galaxy Note 20 Ultra passed through the FCC yesterday, it’s now time for the international Galaxy Note 20 5G to do the same. Carrying model number SM-N981B, the Galaxy Note 20 5G has been approved by the Federal Communications Commission earlier today, July 16, with just a few of weeks to go before Galaxy Unpacked 2020.

The FCC documents reveal the phone’s dimension to be clocking in at 161 x 75.2mm, making it both taller and wider than last year’s Galaxy Note 10. The phone’s thickness is unmentioned by the FCC, but according to previous leaks, the Galaxy Note 20 (5G) should have an 8.5mm profile.

Although an LTE-only Galaxy Note 20 has yet to be confirmed by the regulatory agency, it’s logical to assume that the smaller model will follow the same strategy as the larger Galaxy Note 20 Ultra and be released with LTE connectivity in markets where a 5G device wouldn’t make sense.

The international Galaxy Note 20 5G could be powered by the Exynos 990 chipset despite earlier reports that Samsung might equip its next S Pen flagship with an upgraded Exynos 992 solution. Unfortunately, this hasn’t been confirmed or denied by the FCC documents, so only time will reveal Samsung’s final decision. Either way, the chipset is probably going to be paired with 12GB of RAM, at least for the Galaxy Note 20 5G variant, whereas the LTE model could be limited to 8GB. 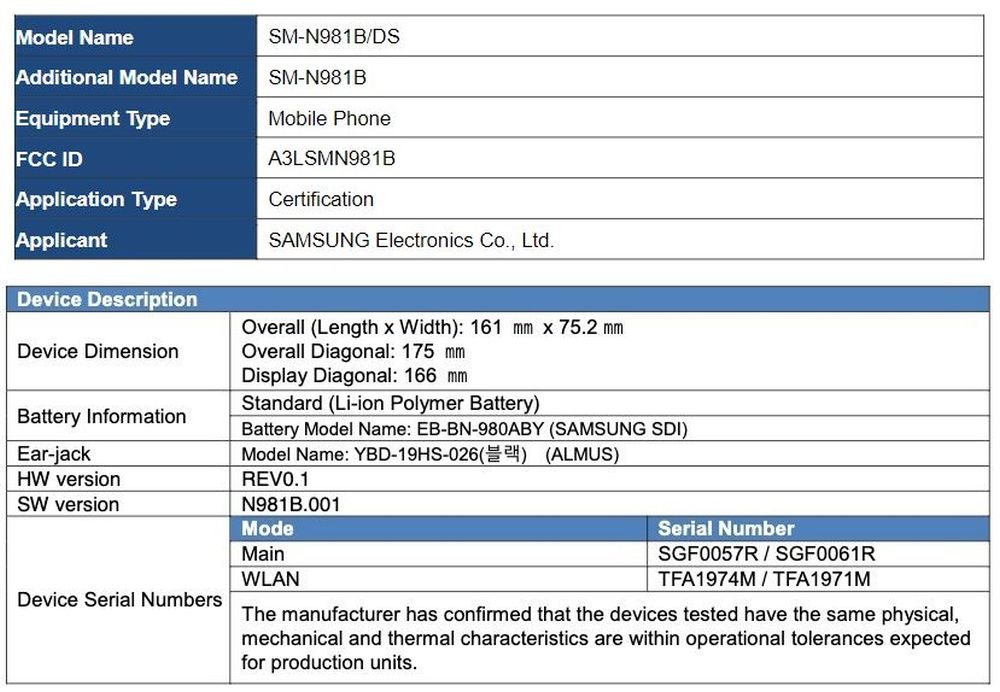