Here’s something interesting: Samsung might introduce two cancelled color options of the original Galaxy Fold. When the Galaxy Fold was announced last year, four color options were made official: Space Silver, Cosmos Black, Martian Green and Astro Blue. Then, things went awry and the device had to be delayed for a few months. When the Fold eventually released in September after going through a few design changes for enhanced durability, Samsung only offered it in Space Silver and Cosmos Black.

However, as Max Weinbach discovered, at least the Samsung US website is now listing the Galaxy Fold in green and blue and the silver and black versions are nowhere to be found. And when we reached out to our sources, we were told that Samsung is indeed planning to launch the 5G Galaxy Fold in metallic green and blue in select markets like Korea. Naturally, we’re left scratching our heads, as there’s no conceivable reason to bring new color options for a device that’s set to get a yearly refresh soon, at least not without a price cut to go along with it.

This is the first time we’re hearing about the original Fold getting new colors almost a year after it hit retail shelves, but if that’s actually happening, we guess we could learn more at Samsung’s upcoming Unpacked launch, where the Galaxy Note 20 and Galaxy Z Fold 2 will be unveiled alongside new flagship tablets and wearables.

Would you purchase a Galaxy Fold here in 2020 if it launched in new colors, even though the Galaxy Z Fold 2 will also be available for purchase in a few weeks? 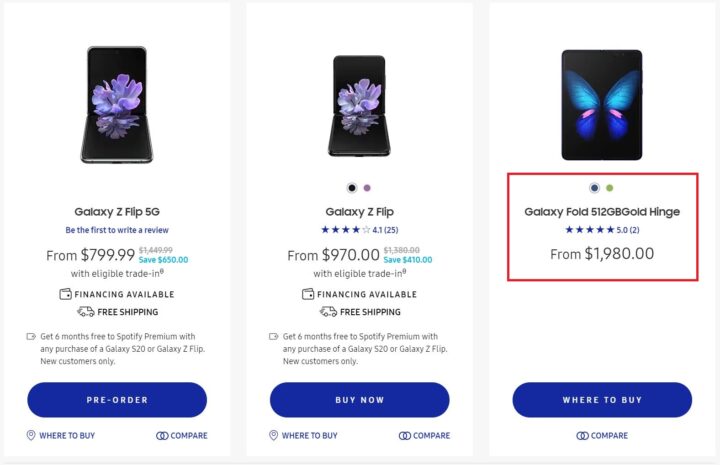