Samsung is reportedly developing a new Galaxy M series of smartphones. It’s said that this series will replace the Galaxy J, Galaxy On and Galaxy C lineups. A rumored front panel of one of the new devices from the Galaxy M series has appeared online today. It shows a notch design that’s different than what we have come to expect from Samsung.

We exclusively reported last week that Samsung has as many as three different Galaxy M models in the pipeline. This includes the Galaxy M20 with model number SM-M205. The series will be offered in markets across Asia, Africa and the Middle East.

The front panel, which has seemingly been identified incorrectly as a display panel by the source, has a different notch design. Samsung revealed its Infinity-U, Infinity-V and Infinity-O notch designs at SDC 2018 last month. Either this is what the Infinity-U actually looks like or Samsung has simply decided to go with a different design for the Galaxy M20. The possibility of the Galaxy M20 featuring a notched display was recently raised by its AnTuTu benchmark as well.

Samsung’s aim behind these new Infinity displays is to increase the screen to body ratio significantly using a notch, no notch and even a display hole. The front panel is a testament to that objective. It will allow for a nearly full-screen display with curved sides and small bezels. It does have a substantial chin, though. There’s a small notch shaped like a drop of water at the top for the camera.

The benchmark also revealed that the device may have an Exynos 7885 processor with 3GB of RAM and 32GB storage. It’s unclear when this device will be released but it will most likely ship with Android 8.1 Oreo and not Android 9 Pie.

Best view this front panel with skepticism until there’s more to go on. It’s not really all that difficult to fabricate these components. Who knows, maybe it’s meant for some Chinese device and not the Galaxy M20 to begin with. 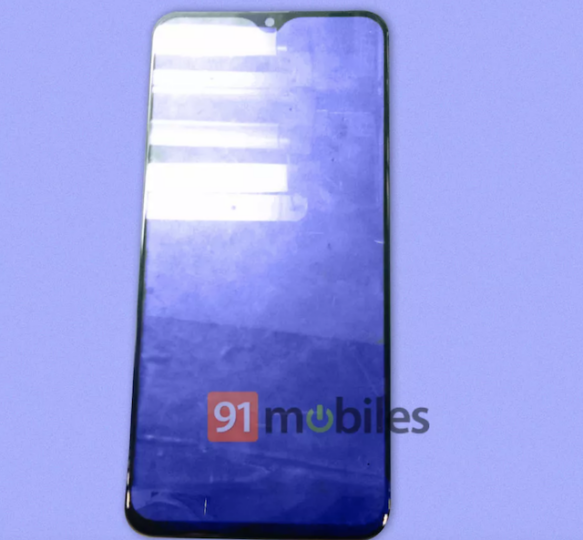