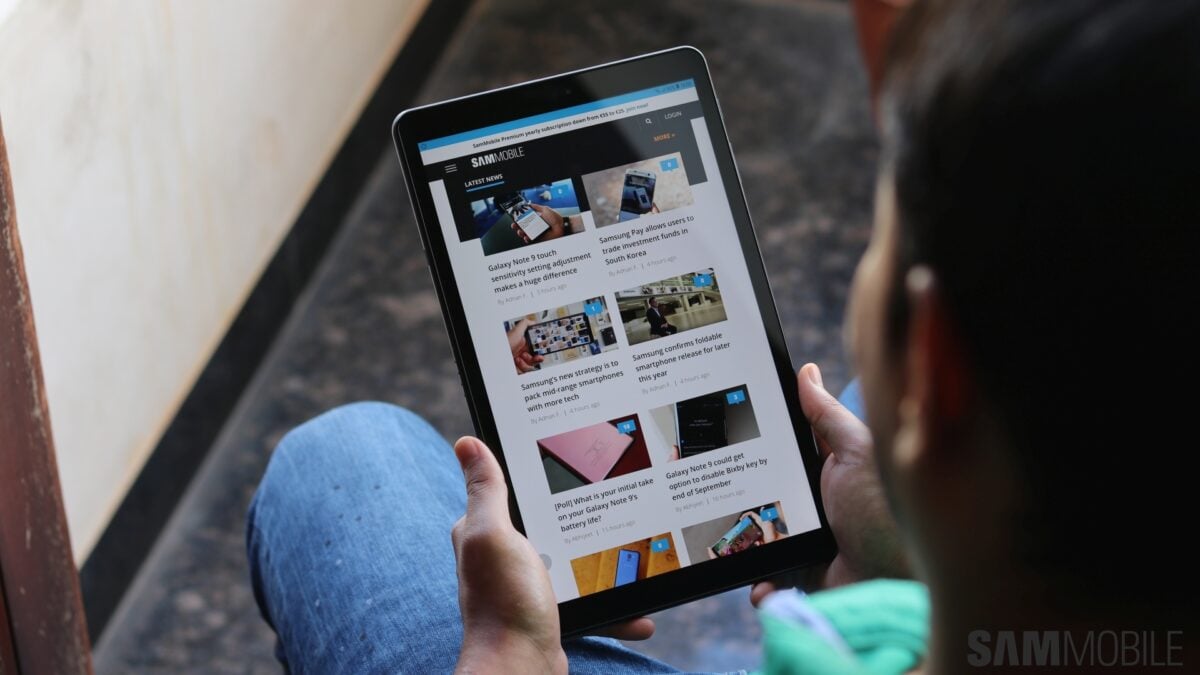 The Galaxy Tab A 10.5 was launched alongside the Galaxy Tab S4, which might be why it isn’t getting much attention. Where the Tab S4 is a premium tablet, the Tab A 10.5 is decidedly mid-range. It does get some impressive features, though, like four speakers, a high-resolution display, and a big battery. We had the chance to test the tablet out thanks to Samsung India, and this review will tell you if the Galaxy Tab A 10.5 is worth your hard-earned money. 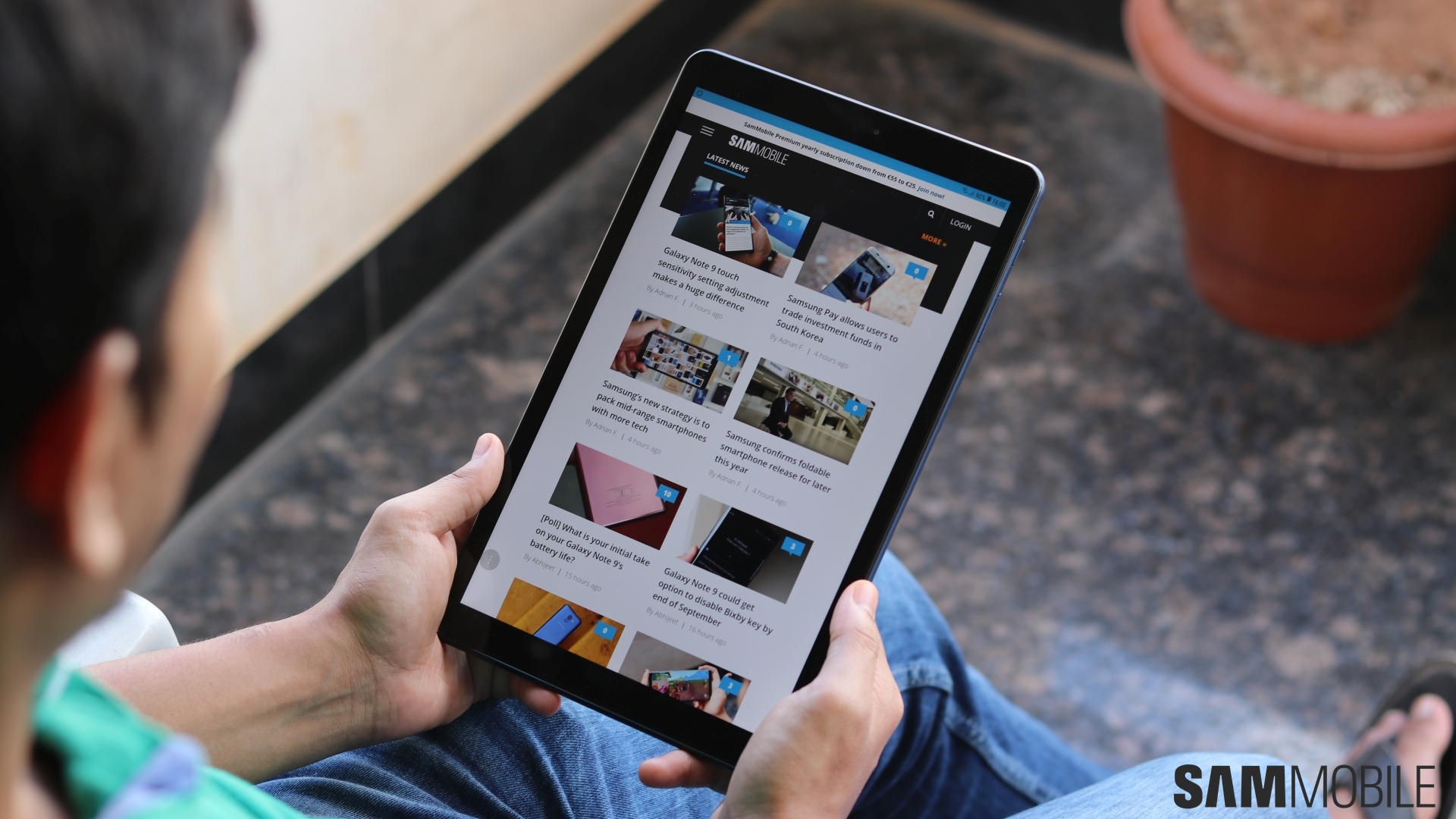 With a 10.5-inch display, the Galaxy Tab A 10.5 is naturally a big tablet. It’s got plenty of bezels as well around the display, with the lack of a physical home key not offering benefits in terms of size reduction. But thanks to a soft touch rubber back, the Tab A offers excellent grip and doesn’t make you fear for its safety as a tablet with a glass back would (the Galaxy Tab S4, for example). It gives off a high-quality feel overall, with its weight also feeling just right. 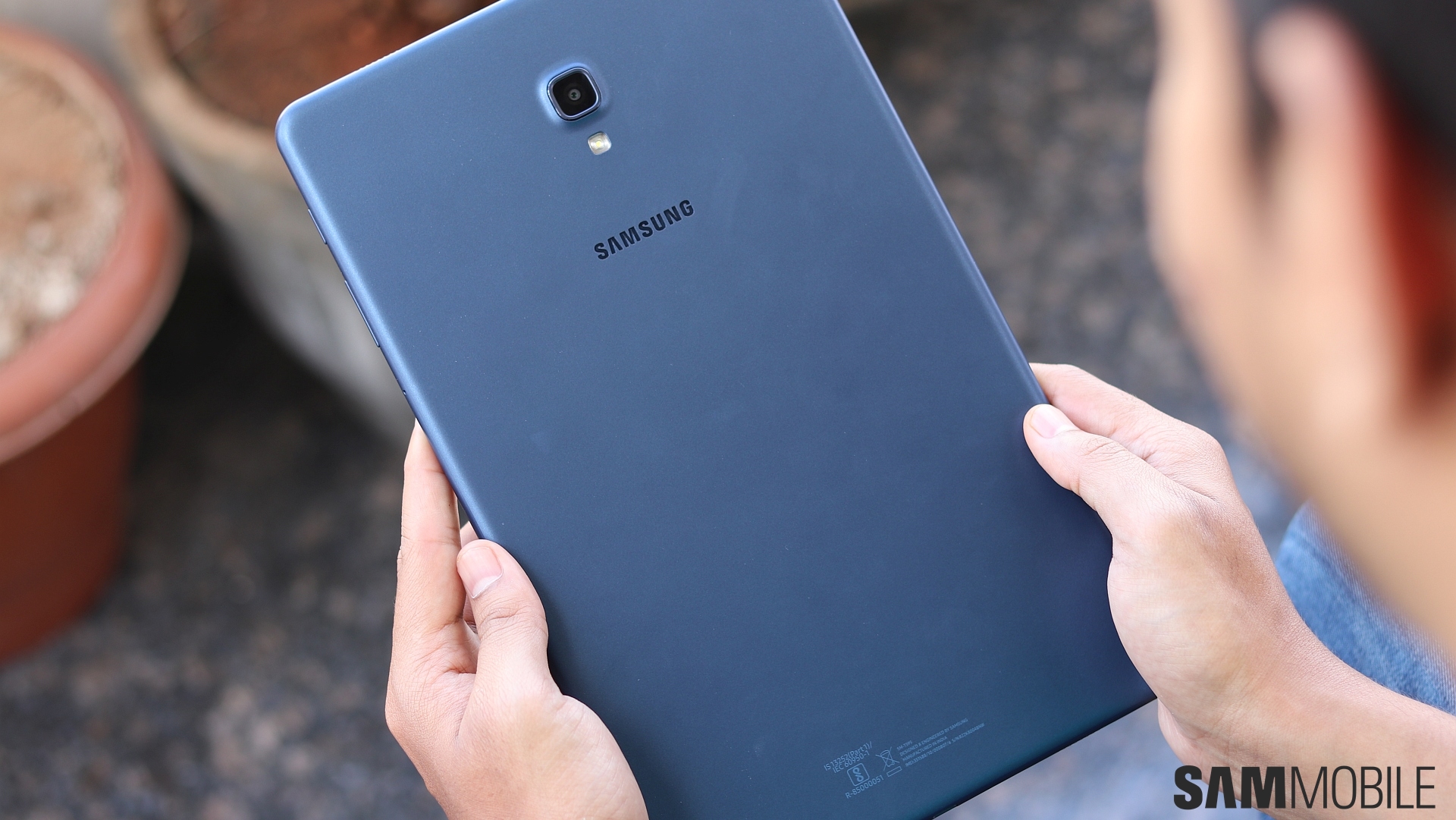 The placement of the physical keys is as we have seen on other Samsung tablets. The volume and power keys are on the right side (and so is the SIM slot in the LTE variant), the four loudspeakers are placed at the top and bottom corners, and four POGO pins are on the left for connecting to the charging dock Samsung is selling as an accessory. The back’s as plain as expected, with just the camera, flash, and Samsung logo taking up space in the upper half. The back does look classy on our blue review unit, and it’s a color we would recommend if you’re bored of the usual black or gold color options. 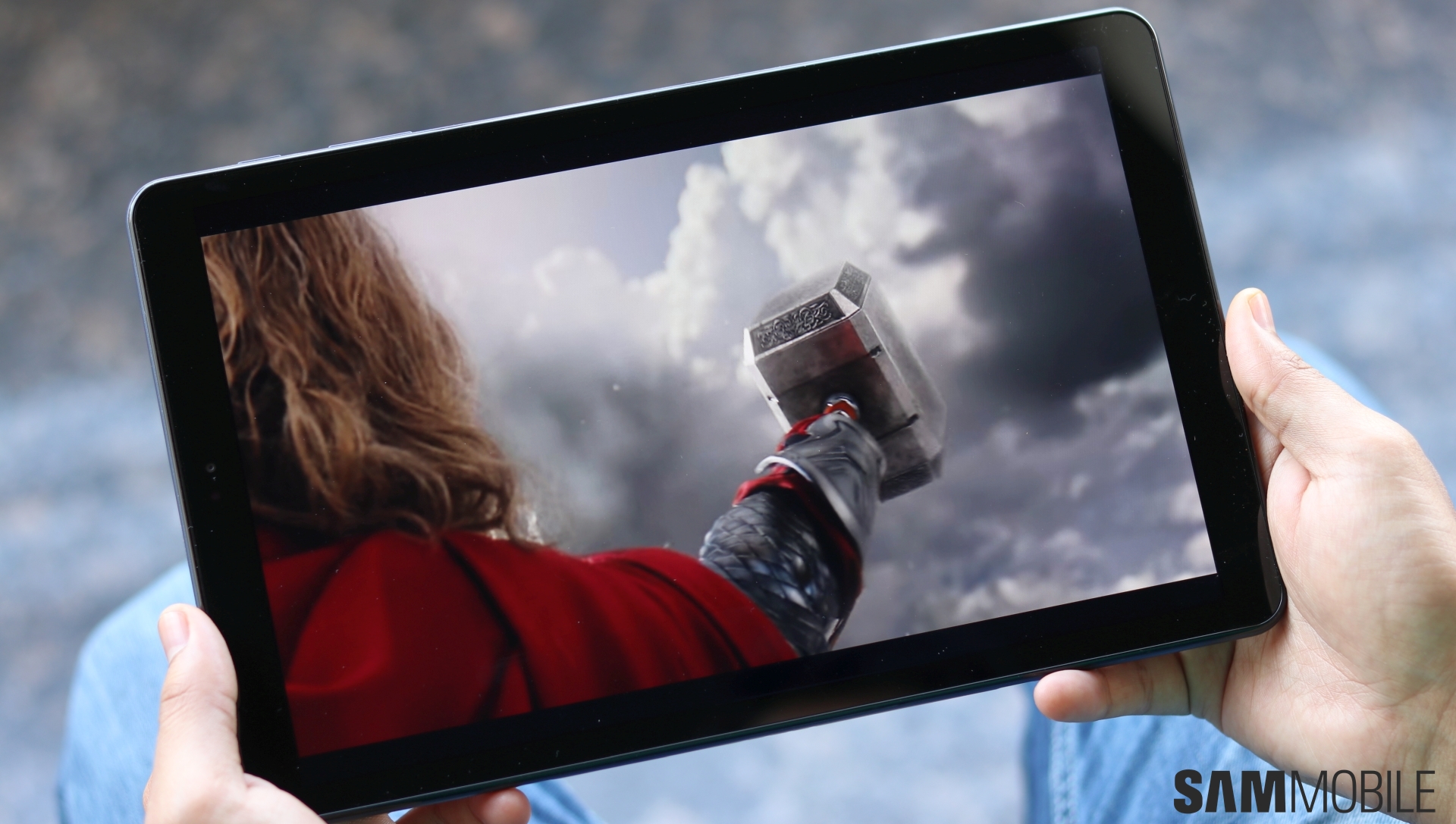 The 10.5-inch display on the Galaxy Tab A 10.5 isn’t great. It’s an LCD panel, and while that in itself wouldn’t be a huge issue, this particular panel is just slightly above average. First and foremost, it doesn’t get bright enough, either indoors or outdoors. And while the colors aren’t exactly dull, they don’t pop as they would on an AMOLED display. The 16:10 aspect ratio and the display’s 10-inch+ size are pretty much the only things good about it. The screen is also quite sharp thanks to a resolution of 1920×1200 pixels, but other than that, this display isn’t really better than what you would find on, say, the Galaxy Tab A (2017).

The Tab A 10.5 has software navigation keys instead of Samsung’s traditional physical home button and capacitive back and recent apps keys. That means there’s no fingerprint sensor, so you can only use facial recognition other than the usual Android security options on this tablet. Thankfully, you can enable the option to double tap the display to wake it up, which is handy now that there’s no hard home button. 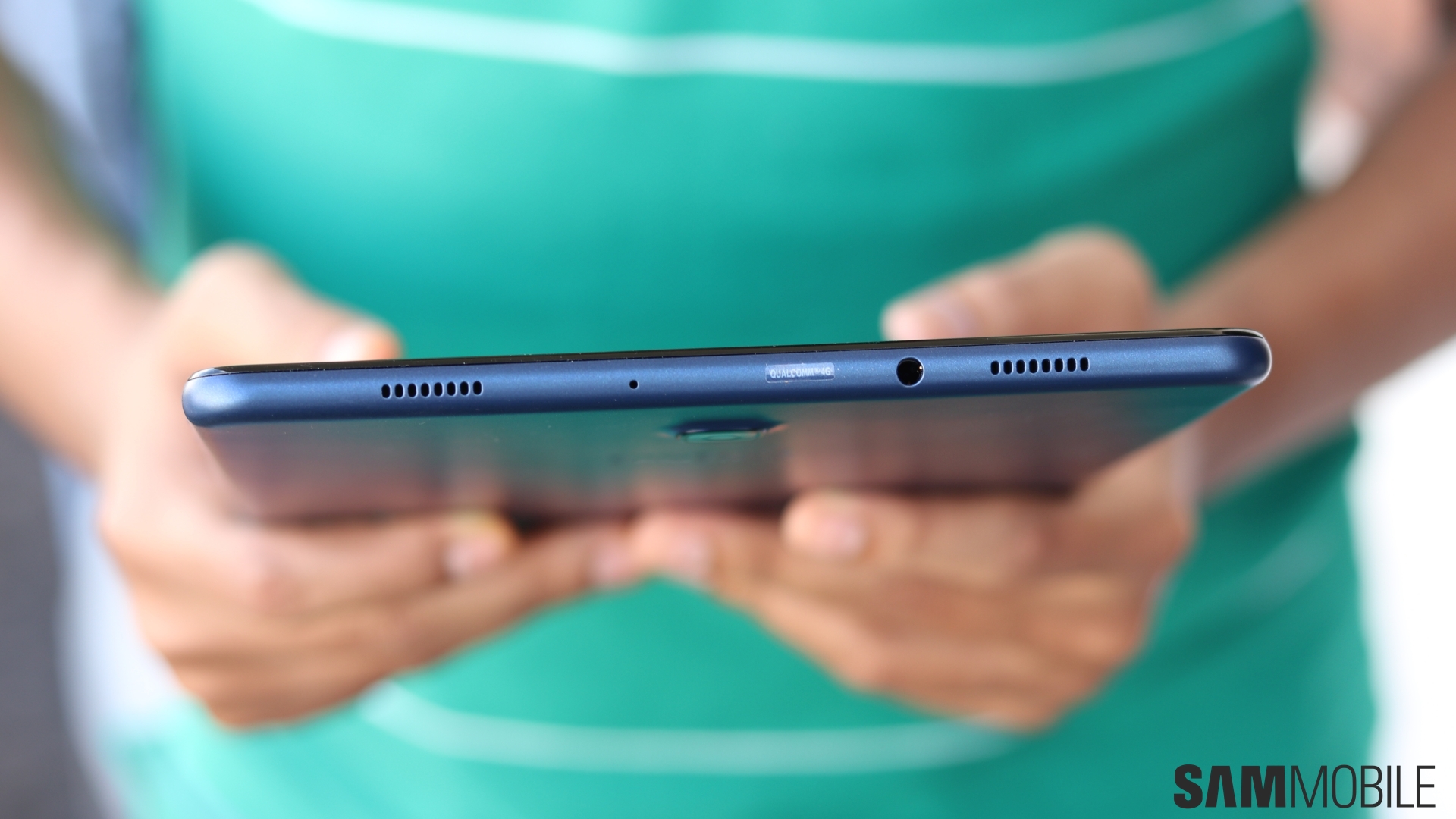 The Galaxy Tab A 10.5 also gets four loudspeakers, just like the costlier Galaxy Tab S4. These aren’t tuned by AKG, but you do have Dolby Atmos support. I have somewhat mixed feelings about the quality of sound that comes out of these speakers, though. They don’t distort at even the highest volume levels when you’re watching movies on Netflix, but a little more bass could have made the experience much better. The speakers don’t exactly sound tinny, but the beats don’t have the thump you expect, especially when playing music.

What about Dolby Atmos? Well, the volume levels remain mostly the same with Dolby Atmos enabled, but it does allow better sound separation for a more surround sound-like effect. Speaking of volume levels, the Tab A 10.5 is loud enough for use in your bedroom, but you might want to switch to earphones in the living room. As expected, there are no earphones provided with the tablet, but if you have good ones at your disposal, just enable Dolby Atmos for the best experience. 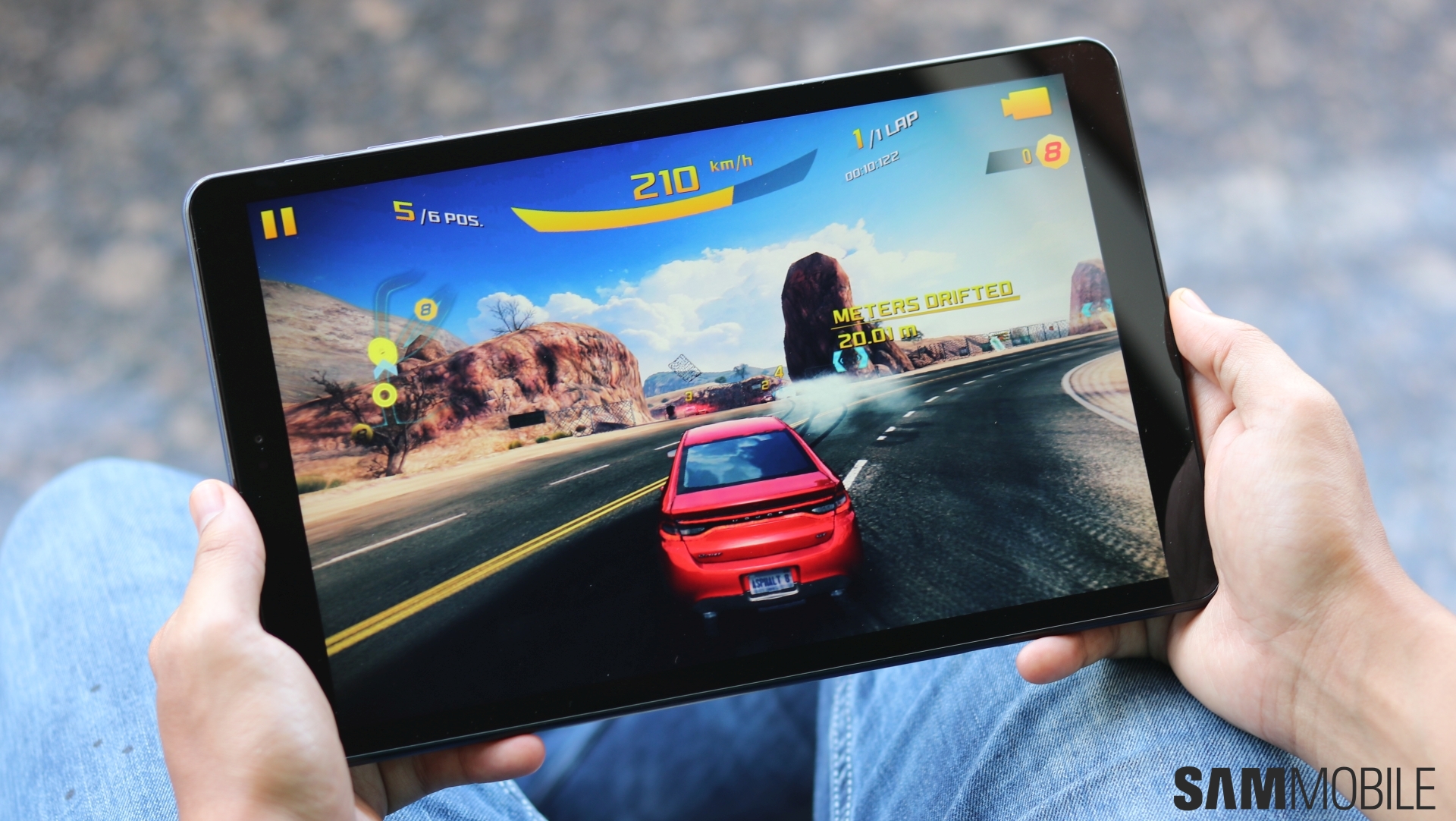 The Galaxy Tab A 10.5 is something of an oddball when it comes to performance. It has a Snapdragon 450 SoC with 3GB of RAM, and while I found it performed well in games like Modern Combat 5 and PUBG at the highest graphical settings, the basic user interface had quite a bit of stutter in the animations. But that’s not to say the tablet is slow in everyday use. Apps launched quickly enough and browsing was mostly a smooth experience in both Google Chrome and Samsung Internet.

But some high-end games, such as Batman: The Enemy Within or the new Asphalt 9, had low frame rates, so I’m guessing it’s more about how well a game is optimized for the Snapdragon 450 and the Adreno 506 GPU inside. Something as simple as changing the wallpaper also took more time than it should, and it also seemed to have poorer connectivity with Wi-Fi networks in problematic spots at my home. Other devices also have issues in these spots, but the Tab A was more prone to disconnecting from the same Wi-Fi network where the signal wasn’t strong enough.

Facial recognition is also too slow on this thing to be useful, unless the lighting conditions are excellent. Part of the reason for that is most likely the average front camera (more on that in the camera section below), but it still means you don’t really have a good substitute for a fingerprint sensor here. Overall, I feel like the device’s performance is good enough for most tasks, but it might not stay that way a few months later. 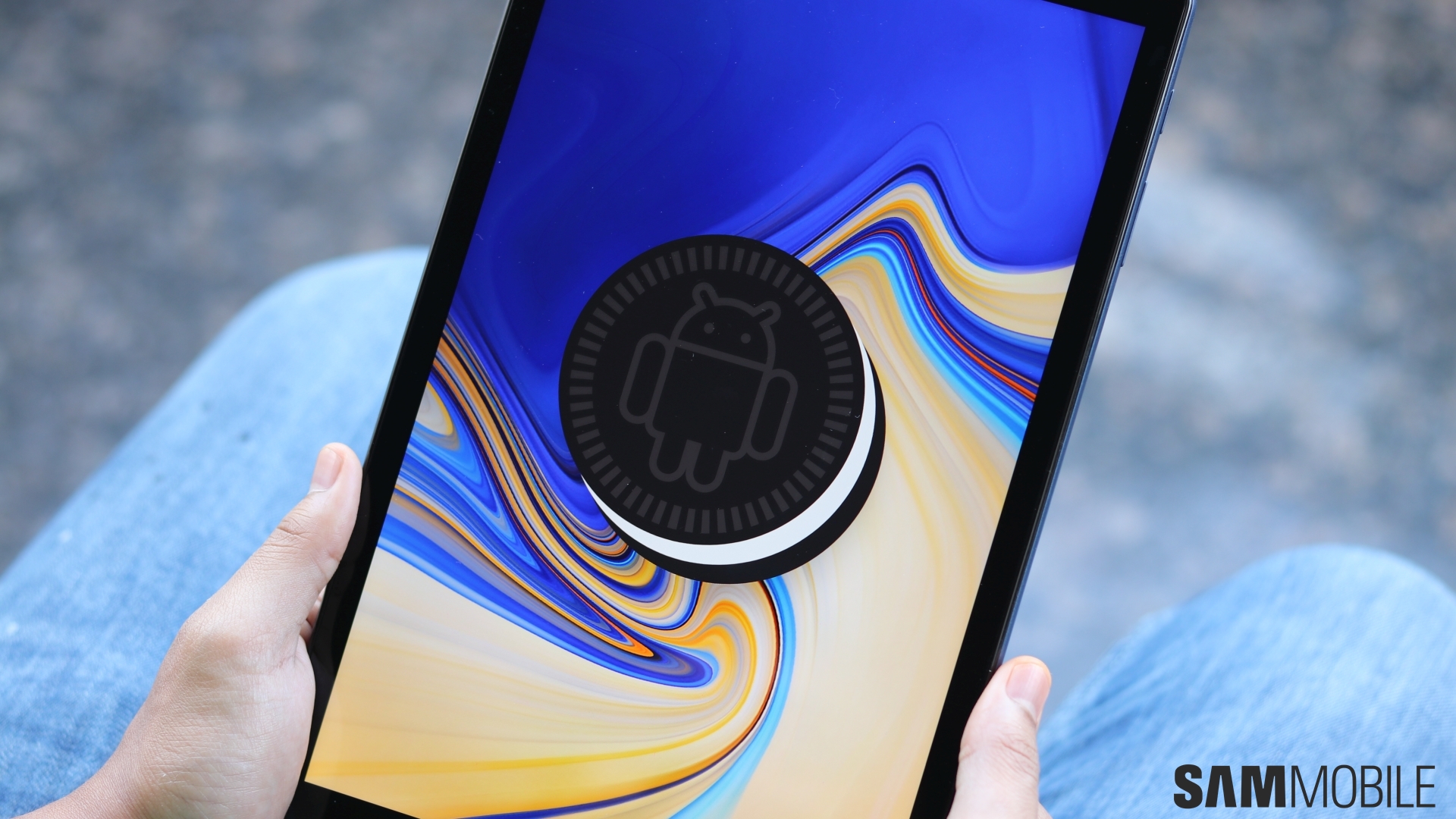 The Galaxy Tab A 10.5 runs Android 8.1 Oreo with Samsung Experience 9.5, but it doesn’t have most of the features you find on the Galaxy Tab S4 or any mid-range or flagship Galaxy smartphone (like theme support or Dual Messenger). The one new feature here is Daily Board, which shows you the time, your gallery photos, weather information, and calendar events when the tablet is charging. But it doesn’t work with regular charging, only with the charging dock that Samsung sells as a separate accessory. Samsung is basically asking you to spend extra money to use the Tab A 10.5 as an always-on display of day-to-day info, making it quite useless overall.

Basic features like blue light filter, Secure Folder, and Multi Window multitasking are present. The tablet can be slow when you’re selecting what apps to use in Multi Window configuration, but once the apps are up and running, performance isn’t an issue. And, like other tablets in the Tab A lineup, the Tab A 10.5 comes with Kids Mode. You can set up your kid’s profile by entering the name, date of birth, and gender, then add some apps and games, emergency contacts, and images and videos that he/she can access. Kids Mode offers a few suggestions for children games on the main screen, and you can also set a daily usage limit.

The software navigation keys are customizable – you can change the background color of the navigation bar and swap the location of the recent apps and back keys. But, as we said in our Galaxy Tab S4 review, it would be great to be able to access the navigation keys by swiping in from any part of the screen. Thankfully, the notification shade expands in the left, right, or center of the screen based on where you swipe down from. 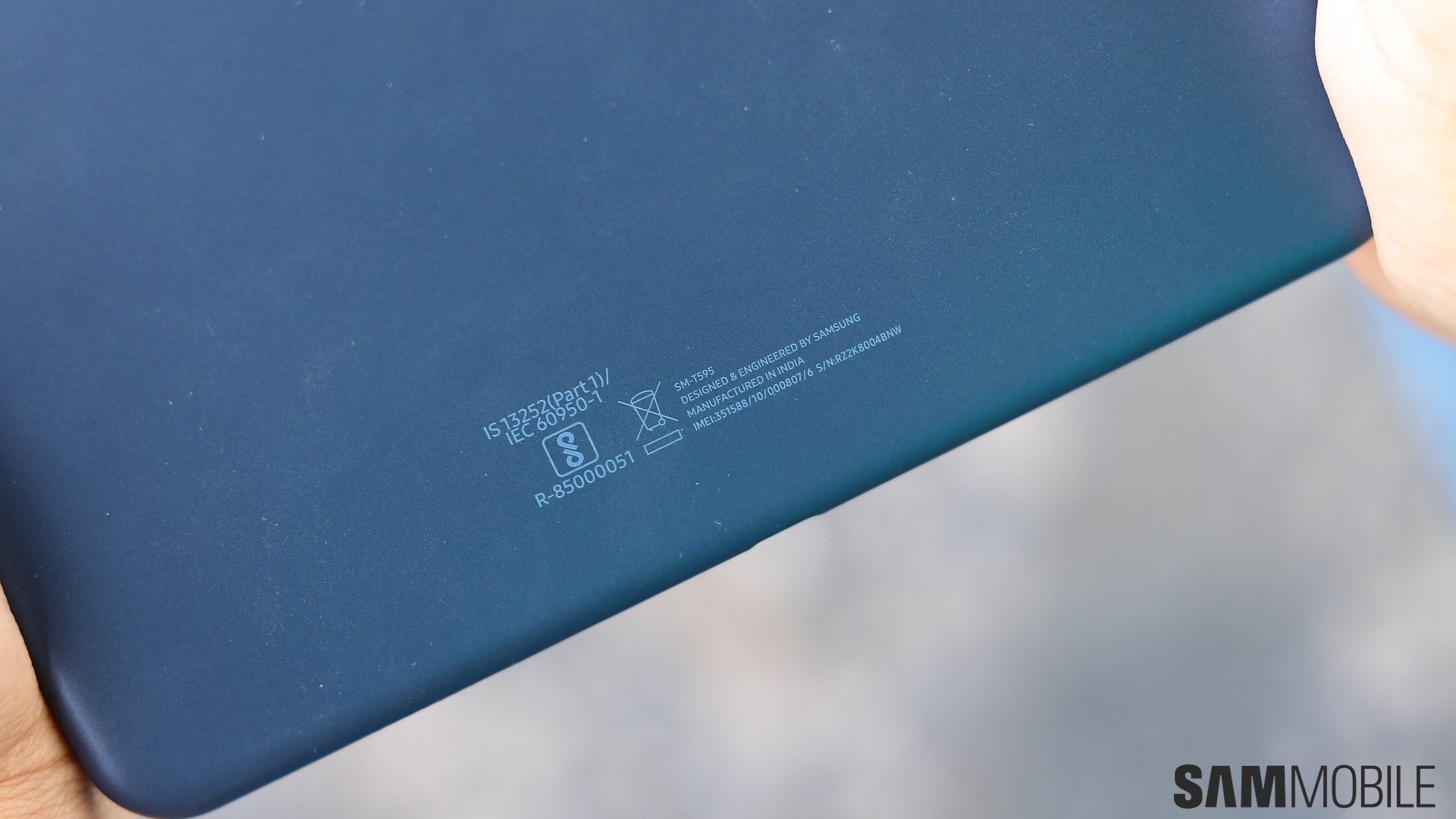 Thanks to the 7,300 mAh battery inside, the Galaxy Tab A 10.5 is excellent when it comes to battery life. Samsung touts 14.5 hours of video playback, and I think that’s actually accurate. I was able to watch nearly four hours of Netflix on a Wi-Fi connection at full brightness, and I lost 30 percent battery. So that’s at least 12 hours of video playback and you’d still be left with 10 percent battery. Impressive, although not entirely surprising given the mix of the humble specs and large battery size. I also didn’t have a SIM card inside, but unless you use it on mobile data too often, battery performance should be similar. And thanks to fast charging, the Tab A 10.5 can recover 100 percent charge in a little over three hours. 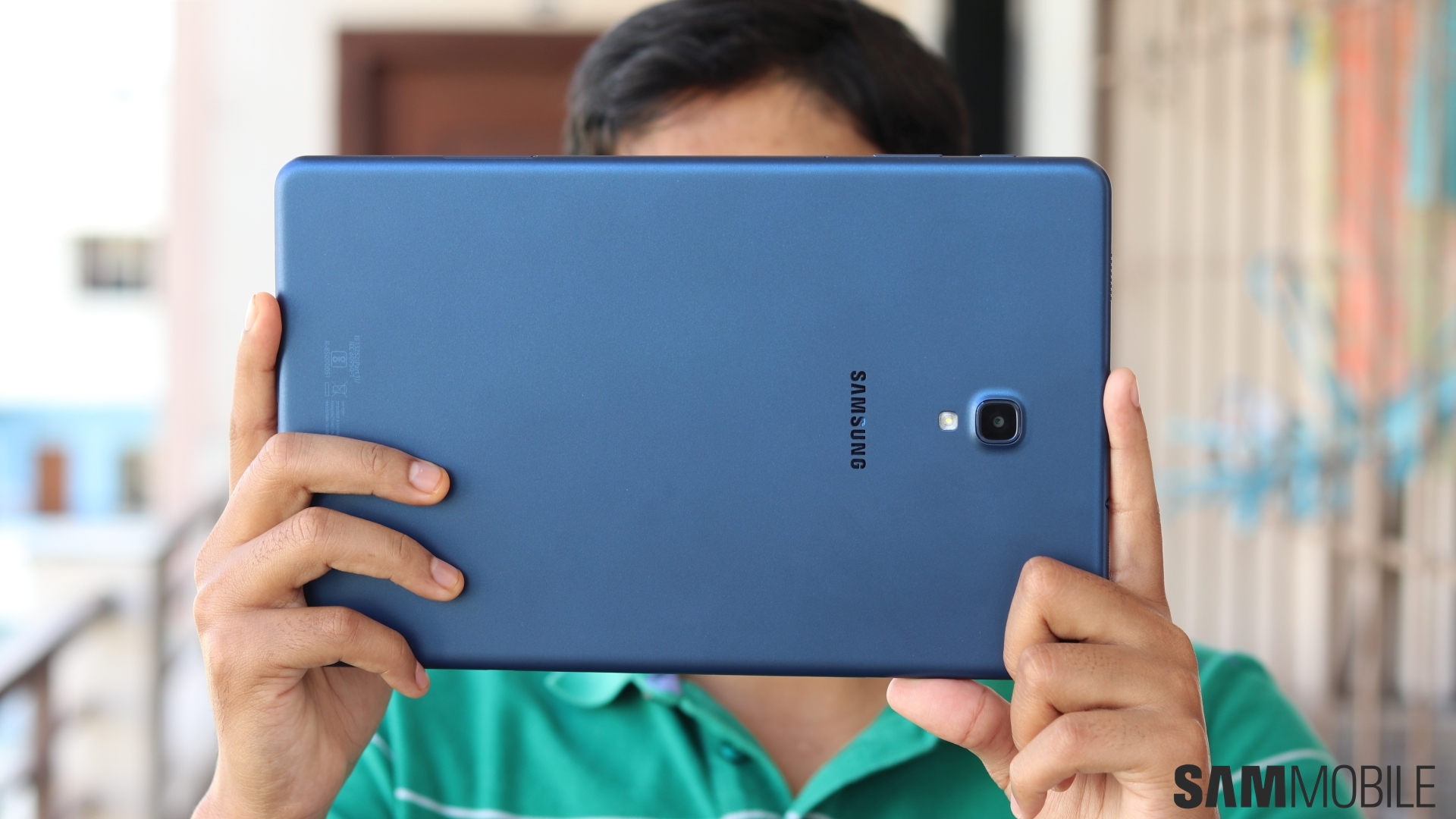 The Tab A’s cameras are, in short, pretty average. The front camera is especially bad and takes selfies of a quality as you would expect from a $100 Android phone. Video calls don’t look great if the other party is using a big display as well, but if you’re on a video call with someone using a smartphone, it’s not as bad. In fact, the photos from the rear camera also look poor because of how big the Tab A 10.5 display is. Overall, this tablet is okay for video calls with your friends and family, but that’s about it. At least the camera interface is the same as the Galaxy S9’s, although that’s not much of a saving grace unless you happen to be one of the few folks who take regular photos on a tablet.

If the definition of a mid-range device is that it neither excels nor fails in any particular aspect, then the Galaxy Tab A 10.5 is the perfect mid-range tablet. The display is of high resolution but the quality of the LCD panel is rather average. Performance is great in some high-end games, but not so much in other games and basic user interface. The four loudspeakers offer good quality sound, but you won’t find the volume levels high enough for a large room. The battery life is the only aspect that’s truly impressive. Well, the design is also nice, with the rubberized back more suitable for a device so big, but you have to give up on a fingerprint sensor and live with not-so-quick facial recognition.

So is the Galaxy Tab A 10.5 worth buying? It depends. If you’re in the market for a not-too-pricey Android tablet with a big, sharp screen and good audio for media consumption, the Tab A 10.5 is a good option. It doesn’t really have any direct competition, unless you aren’t too much in love with the Android OS, in which case the Apple iPads come into the picture. You can get the 9.7-inch iPads for similar (or even lower) prices on Amazon and other retail stores. The app ecosystem for the iPad is better than Android’s, but you do have to pay for some apps that you can get for free on the Google Play Store.

We know we haven’t really answered if you should buy the Tab A 10.5 or not, and that’s because there is no clear answer. If you want an Android tablet that gets the job done and are okay with the Tab A 10.5’s price tag (which starts at around €329 for the Wi-Fi model and goes up to €389 for the LTE variant), you won’t have any major complaints. You won’t really love anything about it, either (except battery life), which is ultimately the biggest issue with the Galaxy Tab A 10.5.

Samsung has released the November 2021 security update to dozens of smartphones. The company has now started r …

Samsung has decided to shake up its mid-range lineup in the United States. To that end, it has announced the l …

Galaxy Tab S4 and Galaxy Tab A 10.5 will get quarterly security update …

Samsung has launched two new tablets today. They offer something for everyone as the Galaxy Tab S4 is more for …