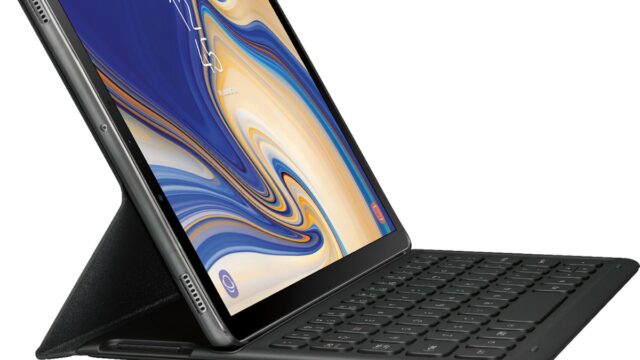 Ever since firmware for the Galaxy Tab S4 became available in our database, we have been waiting for Samsung to make its next flagship tablet official. And the day may not be far when the company does that, as the Galaxy Tab S4 seems to already be on display at a retail store in South Korea. A leaked video is giving us a look at the tablet from the front and back, though it’s a short one so it’s hard to make out any details.

The video does show us the 16:10 display, which many of us have been asking Samsung to bring back to its flagship tablet line. There’s no fingerprint sensor, either, replaced by an iris scanner and facial recognition. As we had exclusively revealed, the Galaxy Tab S4 specs include a 10.5-inch (256×1600) Super AMOLED display, Snapdragon 835 SoC, 4GB of RAM, 64GB of storage, a 7,300 mAh battery, and 13-megapixel and 8-megapixel rear and front cameras. There are AKG tuned speakers, support for Samsung’s DeX platform, and a Bluetooth-enabled S Pen as a separate accessory. The Tab S4 will run Android 8.1 Oreo out of the box, a first for any Samsung device.

We’re unsure of what the text next to the tablet says. It seems to be the specs of the tablet, but if you can read Korean and can translate the text on the big pink placard, feel free to let us know in the comments. And if you’re interested, you can also download the official Galaxy Tab S4 wallpapers, some of which may also come with the Galaxy Note 9.