Its S.LSI division is showcasing technologies such as its ISOCELL and Exynos ranges as well as its smart speaker reference platform. The company’s new ISOCELL Plus camera technology is on display as well.

Samsung has been working on its own Bixby-powered smart speaker but the company is yet to reveal any details about the product. There’s obviously a lot of interest among fans who want to see how Samsung will approach the highly competitive smart speaker market and take on established rivals like the Amazon Echo and Google Home. We exclusively reported earlier this month that the Bixby Speaker will be feature-packed at launch so it does look promising right now.

Even though it hasn’t launched its smart speaker as yet, Samsung will supply components to others who already have or are planning to do so. The Samsung smart speaker reference platform that the company has showcased at Mobile World Congress Shanghai has a touchscreen display and allows users to control their music and smart home devices.

The smart speaker platform is based on several Samsung components including its Exynos processor, image sensor, RF, PMIC and secure element. Samsung says that these components will help manufacturers who are developing smart speakers to reduce their development time and bring their products faster to market.

Samsung Electronics obviously sources the bulk of its components from its subsidiaries so the Bixby Speaker will most certainly come with some of these Samsung ICs as well. The reference platform doesn’t offer hints about the design of its actual Bixby Speaker so we may have to wait for a while to find out what it looks like. Samsung is yet to confirm when it’s going to launch its Bixby Speaker. Chances are that the company may unveil it at IFA 2018 this September. 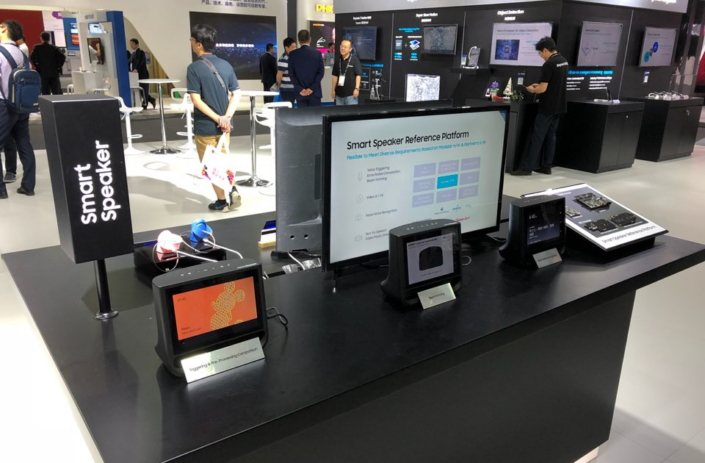 Samsung’s Bixby speaker is called Magbee, or is it?

Exclusive: Here’s some of the functionality the Bixby Speaker co …

Samsung’s Bixby Speaker might be able to detect whether you̵ …

After Galaxy S9, Samsung no longer obsessed with ‘being the worl …